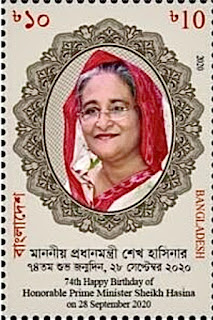 🇧🇩 The postal service of Bangladesh issued a single stamp on 28 September 2020 to commemorate the 84th birthday of the prime minister of Bangladesh, Sheikh Hassina. The issue was lithographed. Imagine the fuss if Royal Mail were to issue a stamp to commemorate Boris Johnson’s birthday! Rating:- ****.

Thanks to Gene W of Colnect for information about this year.

🇱🇰 Sri Lanka Post issued a set of 3 stamps and 1 miniature sheet containing the 3 stamps on 22 August 2020 on the subject of Ancient maps of Sri Lanka.This attractive and interesting issue was lithographed and is perforated 13.5. Rating:- *****. 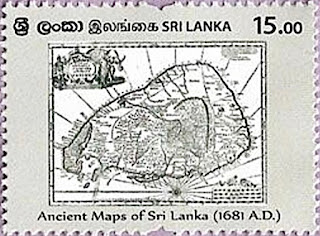 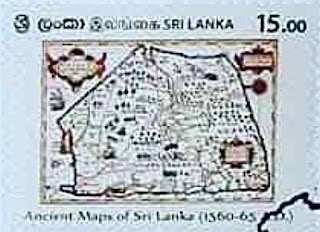 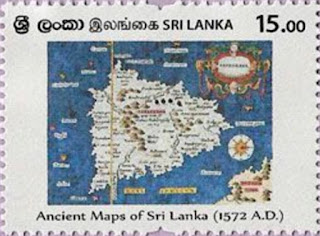 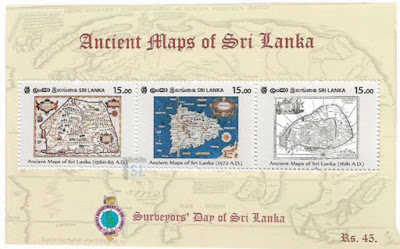 🇬🇧 The Postal Museum in London, though shut due to the COVID-19 pandemic with its Post and Go kiosk A001 inaccessible to the mail-sending public (if such a creature still exists) and collectors alike, will nevertheless issue a strip of Post and Go stamps to commemorate the non-existent Autumn Stampex 2020 philatelic exhibition (well, it does exist but only as a feature on the internet). This item made up of Machin Head stamps with the MA13 code apparently with the additional inscription’The Postal Museum/Virtual Stampex 2020’ is therefore only obtainable by mail order from the Postal Museum at a price of £10.11p plus an additional £3.50p Post and packing. It seems rather surreal to me - stamps costing a lot of money produced by an inaccessible machine to commemorate a philatelic exhibition that has no physical reality. I suppose that this is an example of the new normal. Perhaps we can buy them with virtual money or else these Post and Go Stamps could be made to exist but only virtually. 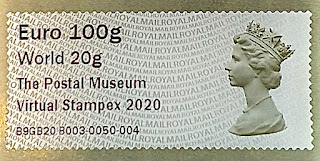 🇮🇲 Isle Of Man Post Office will issue a set of 6 stamps and 1 miniature sheet containing all 6 stamps on 14 October 2020 to commemorate the 150th anniversary of the death of the great English writer Charles Dickens who, as far as I know had no connections with the Isle Of Man. Five of the designs feature scenes from the novel Christmas Carol but it is not clear whether this set is also meant to act as the island’s Christmas set for 2020. In the past a number of territories have issued stamps depicting A Christmas Carol and there is nothing original in this issue. The issue was designed by Geoffrey Sanderson and EJC Design and was lithographed by Cartor and perforated 13. Rating:- *. 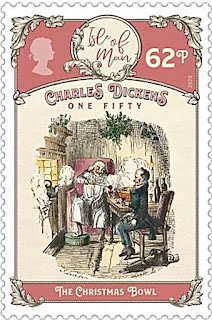 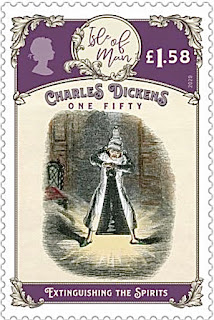 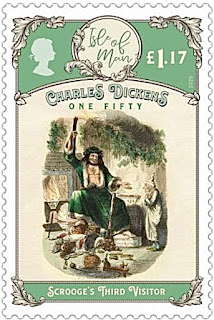 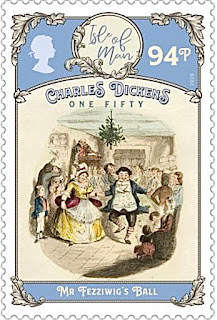 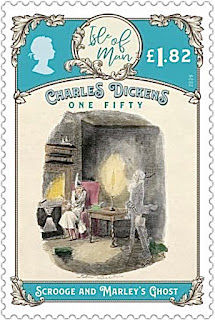 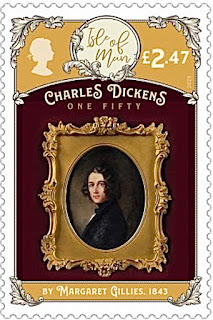 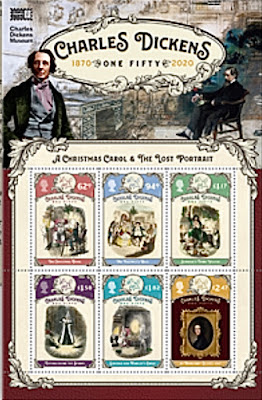 🇬🇧 For those interested in the ongoing saga of Royal Mail’s commemorative postboxes 4 new ones have been unveiled on 30 September 2020 to commemorate Black History Month. A major city of each of the four nations that make up The United Kingdom is host to one of the boxes which are painted black and gold. Each postbox depicts a previously issued Royal Mail stamp which portray a black Briton.
The London postbox is situated close to the Black Cultural Centre in Acre Lane in Brixton and depicts the stamp which was released to commemorate the 250th anniversary of the Royal Academy by depicting a painting (‘Queuing at the RA’) by the black physically handicapped artist Yinka Shonibare. 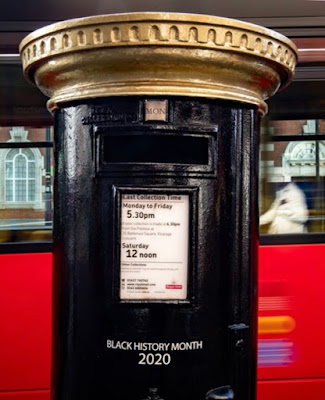 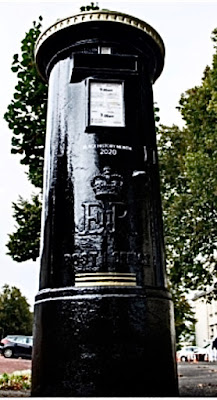 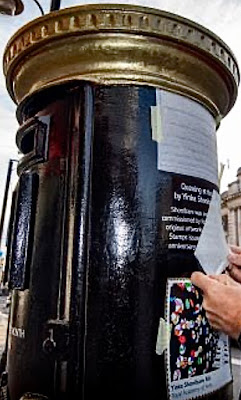 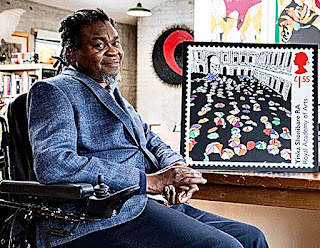 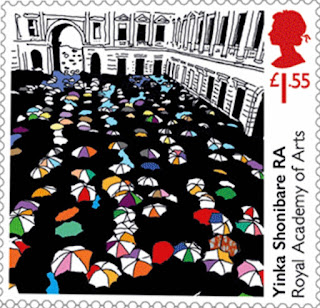 The postbox in Cardiff is situated in King Edward VII Avenue close to City Hall and depicts the stamp issued in 2006 to commemorate the 150th anniversary of the National Portrait Gallery which features Mary Seacole who nursed the injured in the Crimean War. 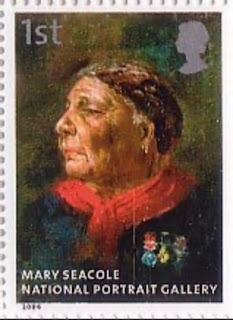 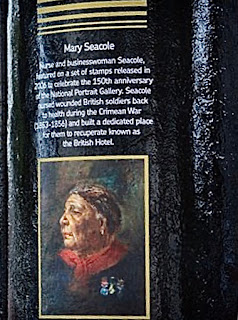 The Scotland postbox is situated in Byres Road in Glasgow and includes an illustration of the stamp issued to commemorate the Centenary of the First World War and depicting Walter Tull who was the first black player for the Glasgow Rangers Football Club and the first black officer in a British Army regular unit. 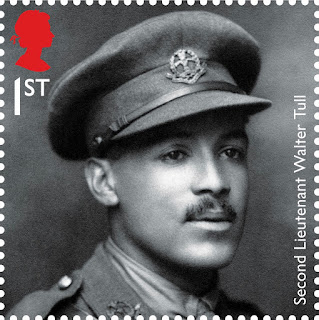 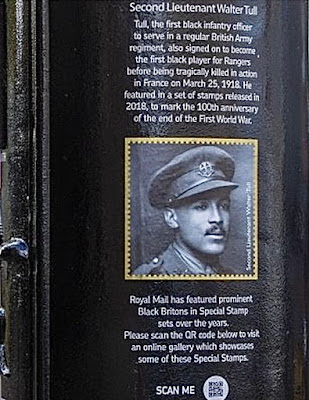 The Northern Ireland postbox is situated in Bedford Street in Belfast close to the City Hall. The depicted stamp is that which shows the comedian and actor Lenny Henry who was featured on one of the Comedians stamps. Originating from Birmingham one cannot help but think that he would have been better depicted on a postbox located in that city rather than in Belfast. 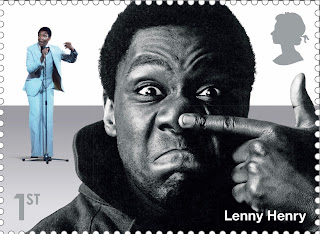 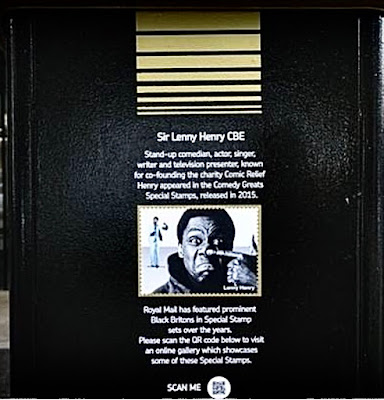