🇭🇰 I think I must be getting too old for this stamp collecting lark. Yes … too old. It’s clearly now a young person’s game with almost every item I seem to be featuring here depicting youth culture and in particular popular comic books (and if not that then adolescent science fiction movies or television series with only music used as a subject for portraying old people in the form of has-been musicians). And so we come to yet another, yes you guessed it, comic book; this time from Hong Kong Post, and leading with the picture of a rather immodest young man with pronounced abdominal musculature baring his torso unselfconsciously (yes, I accept that Michelangelo’s David bared more than that equally unselfconsciously and there have been enough depictions of that particular sculpture on stamps over the years, along with copies of Rubens’ paintings of nude amply endowed women and countless Gauguin pictures of scantily clothed south sea islanders and so on but where will it all end?).

The featured comic book in question seems to be a notable piece of literature apparently popular in Hong Kong and titled Feel 100% and judging by the illustrations used for the stamp designs mainly centred on young western characters rather than Chinese people who make up the vast proportion of the former British colony’s population which I find interesting. I wonder who the target audience of this comic is and by extension at whom this stamp issue is aimed. The comic certainly looks exciting as the stamp designs depict characters doing such thrilling things as lounging in armchairs and going shopping - a thrill a minute.

The designers of the issue are identified as Andrew Lo and Lau Wan-kit whether they want to be or not with printing being carried out in lithography by Enschedé, the $20 miniature sheet additionally having ‘sand varnish and spot varnish’ applied to it. The 6 stamps and 2 miniature sheets are perforated 13.5 and the date of issue will be 16 September 2021. Rating:- *.

Of course it may just be that Feel 100% really is a modern classic, a sort of 21st century Jane Austin tale of manners and fashions set in the Far East. Perhaps someone can enlighten me. But that young man on the $2.80 really does need to get his lockdown hairstyle seen to. 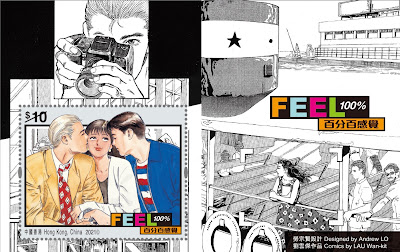 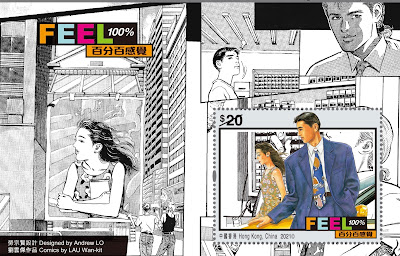 🇲🇺 Mauritius has been very much in the philatelic news in recent weeks what with the sale at auction of the cover bearing an 1847 Mauritius Penny Orange which had been used to carry an invitation to Lady Gomm’s ball for a record price for any philatelic item - almost US$12 million. Likewise the Mauritius government’s success in persuading the Universal Postal Union to issue a dictum that stamps of the British Indian Ocean Territory should not receive international recognition has received a lot of interest in the general and philatelic media. 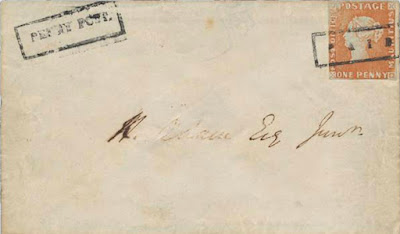 We might also add the news that an important figure in the modern history of Mauritius, the former prime minister and former President of Mauritius, Sir Anerood Jugnath, father of the present prime minister, Pravin Jugnauth, died on 3 June 2021 at the age of 91. Mauritius politicians when in power seem to know how to use stamps as propaganda since we may recall that Mauritius Post issued a set of 5 stamps no less in 1990 to commemorate Jugnauth’s birthday. Imagine the fuss if national postal services issued stamps to commemorate the birthdays of current leaders in the West such as Johnson or Trudeau.

The subjects for the designs were artfully chosen to project Jugnauth as a statesman - one design pictured him with the Father of the Nation, Sir Seewoosagur Ramgoolam, and another with the much loved Pope John Paul II and another depicted Jugnauth sitting in his office in a statesman-like pose.

Now, one suspects, Mauritius Post will be lining up another issue to commemorate Jugnauth and no doubt his son would hope to bask in his late father’s philatelic reflected glory. It’s hard to believe that one design of such a set would not depict the father and the son together. Aaah! the manipulations of politicians. 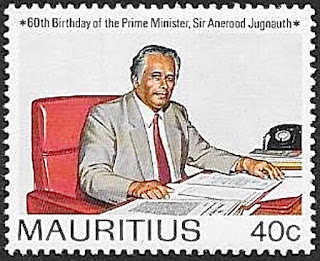 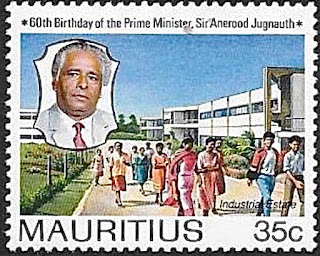 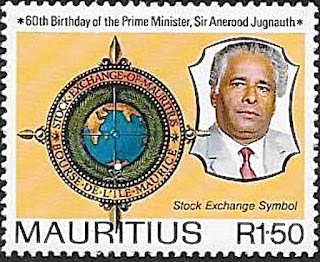 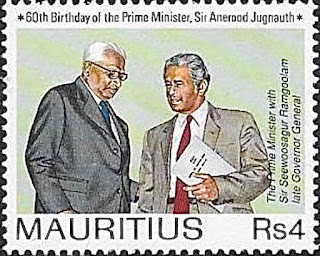 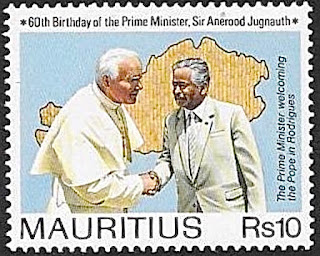