🇬🇮 Royal Gibraltar Post Office issued a set of 6 stamps on 9 February 2021 to commemorate the 95th Birthday of Queen Elizabeth II.The issue was designed by Creative Creation (Worldwide) Ltd (is that related to Creative Direction (Worldwide) which is responsible for the production of stamps for some South Atlantic, Antarctic and Caribbean territories?) using photographs supplied by Getty Images. The stamps were lithographed by Cartor. The theme of the issue is ‘Devoted to your service’ and the stamps are very similar to those to be marketed by Isle Of Man Post Office later in the month (see Blog 1815) which also have the same theme. Those stamps are described as being designed by Andrew Robinson but one has the feeling that there is a mini-omnibus in the making here. Rating:- ***.

🇮🇪 It’s clear that having replaced its annual St Patrick’s Day stamp issue with a rather more ambiguous and obviously more secular ‘Stamp for Ireland’ series the postal service of the Republic of Ireland, An Post, really does not have any idea on how to actually illustrate this concept. This year’s design is as weak as last year’s was and the designer has had to resort to prettying up the word Fáilte (Welcome) and surrounding it with a swirling pattern. Unless designers can come up with something a little more interesting this is a series which should rapidly be consigned to philatelic history along with the very dull annual Love stamps. Perhaps An Post could bring back dear old St Patrick who really didn’t seem to be doing too much harm to An Post’s new issue programme.

The unfortunate designer of this issue was (were?) The Stone Twins and the stamp was lithographed by Enschedé. Rating:- *. The date of issue will be 18 February 2021. 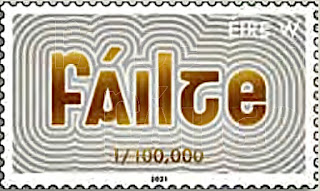