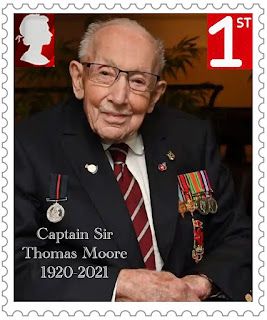 🇬🇧 It’s hard to believe that there’s anyone in Britain who does not feel saddened and moved by the news of the death of Captain Sir Tom Moore, the centenarian who raised £31 million for the National Health Service charities, whose wonderful personality and brave actions during the COVID-19 crisis raised the morale of everyone in the country and helped to make the dark days seem a little bit brighter.

After walking 100 times around his garden supported by a Zimmer frame to support health charities (his initial target was just £1000) this splendid gentleman, a veteran of the British struggle against the Nazis in the Second World War and a proud Yorkshireman to boot, captured the hearts of all those who heard or read of his story and overnight he became a national treasure and an icon of the struggle against the fatal virus.

On his 100th birthday he was honoured by a RAF flypast of his home by spitfires and hurricanes, the aircraft which saved the country in 1940 when Hitler’s forces did their best to destroy the country, and he was presented with a cap of the England Cricket team by former captain Michael Vaughan, cricket being one of his great loves. Remarkably he topped the British music charts with a record he made with the singer Michael Ball. He was knighted by The Queen to honour his achievements. So the question is, if The Queen can honour this wonderful man who has personified the whole nation’s fight against the pandemic then surely Royal Mail can do the same by issuing a dignified and respectful and joyous stamp to commemorate his life?

True, Royal Mail did use a special postmark to commemorate Captain Tom’s 100th Birthday but now it’s time for him to be given a place in the national stamp album (if Del Boy can have one then certainly there should be a place for Captain Tom) by him having his face appear on a British stamp, fittingly sharing the stamp with the Queen’s head. Royal Mail is always so inflexible with its new issue programme and misses the opportunity to mark important events and unplanned occasions which catch the national imagination. Now here’s a chance for Royal Mail to do the right thing and commemorate Captain Tom. I think such a stamp would be a bestseller too if Royal Mail got a move on with releasing such an issue. It doesn’t take long to design one (my own above took less than five minutes) and we know from the previous London Olympics gold medal winners series that printing can be done in a day or two. Here’s a chance for Royal Mail’s stamp programme planners to do something which will be universally popular as well as to commemorate the passing of a British gentleman and icon. But I don’t hold my breath.

Post scriptum to Royal Mail - don’t forget the passing of another icon and national treasure who helped Britain to make it through its darkest days; I mean of course Vera Lynn (see Blog 1690). 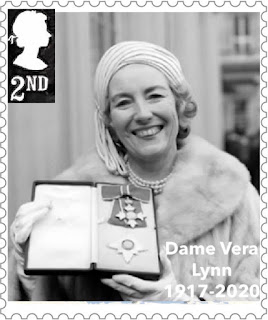