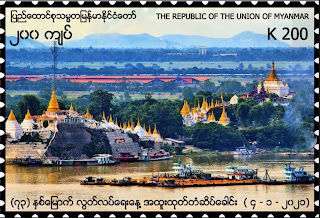 🇲🇲 Though Myanmar has never been a Commonwealth member, in recent years I have included reports of its often excellent new stamps here in the Blog. The British have had links with what was once Burma since 1617 when the East India Company opened trading posts in the territory. Burmese territory was incorporated in the Indian Empire on 1 January 1886 and Indian stamps were used there until 1 April 1937 when the territory was transferred to direct British rule when stamps were issued inscribed with the name of Burma on them.

Burma was occupied by Japanese armed forces from April 1942 until 1945. Burma became the first country after the end of the Second World War to achieve Independence from Great Britain on 6 January 1948 as a republic which at the time prevented Burma from joining The Commonwealth. A military coup took place on 2 March 1962 led by General Ne Win and since then the military has dominated the government of Burma. The country’s name was changed to Myanmar in 1989.

Although the military remained a powerful force in the politics of Myanmar it did allow a process of reforms to be made from 2011 to 2015 when a general election resulted in victory for  the party of Aung San Suu Ky, daughter of the leader of the Independence movement in the 1940s. Myanmar seemed to be facing a bright new future and the prospects of its eventually being able to apply for Commonwealth membership if it wished strengthened greatly. That is when I started to collect the country’s stamps again and reporting on them here. Further general elections were held on 8 November 2020 when Aung San’s party strengthened its position in Parliament and the Military’s own party received just 6% of the total vote. The Military disputed the election results and claimed that they were fraudulent and on 1 February 2021 staged a coup removing Aung San Suu Kyi from power. Myanmar seems to be back to square one.

I will continue to feature the stamps of Myanmar here because of its historical links with Commonwealth countries though there is no prospect of the country joining The Commonwealth under present circumstances. 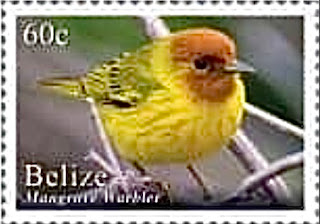 🇧🇿 Where are the definitive stamps of Belize featuring local birds which Gibbons Stamp Monthly listed in its Catalogue Supplement last year but which have not yet appeared on the sales lists of any new issues dealers? The date of issue was said to have been 29 April 2020 but nothing happened. It was later reported that the issue had been delayed. The excellent internet site Birds of the World on Postage stamps compiled by Chris Gibbins reports from time to time on any progress with this particular issue that can be discovered and on 5 January (2021) he reported that “the package (I assume this means ‘the package containing the stamps’) was sent to Harry Allen (philatelic agents of Belize’s postal service) but they were closed due to Covid and HA (Harry Allen) cannot trace it yet!”.

I have been bemused for a long time as to why postal administrations continue to use Harry Allen as their philatelic agent when there is the obvious superb alternative of using the services of Creative Direction/Pobjoy Stamps which produce a fine continuing programme of new issues, neither excessive nor  so inadequate as to result in loss of interest by collectors, for their client territories. Stamp issues from Creative Direction/Pobjoy are imaginative, relevant in subject matter, well designed and produced and are of a sensible total face value and publicity to collectors about the issues is first rate. 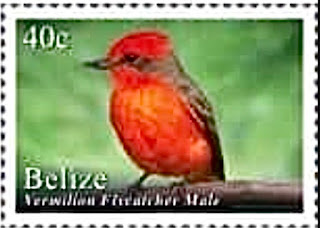 I recall the St Helena Napoleon Bicentenary issue of a few years ago when the authorities in St Helena were holding a rather grand event on the island with visiting foreign dignitaries and were planning to distribute examples of the commemorative miniature sheet to their visitors. The St Helena authorities (Harry Allen is the philatelic agent for the St Helena postal service) suffered the embarrassment of not having the items on the island in time to hand out to their guests. The reasons for the inability to distribute the philatelic items were never spelt out but one has one’s suspicions. The event took place towards the end of 2015 but the miniature sheet was not issued until January 2016, too late for the official celebrations. 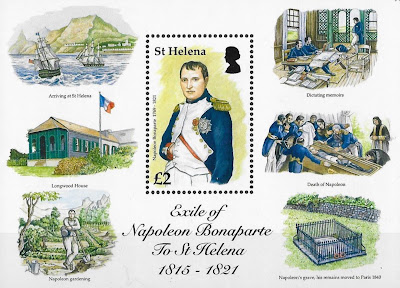 As January comes to a close and winter is two thirds over, the world of Commonwealth stamps carries on with the first of this year’s issues nestled comfortably in my albums and the Pfizer COVID-19 vaccine has been doing its work in my left deltoid muscle for the last 11 days which may mean I might be able to go to a philatelic exhibition this year (and I don’t mean a virtual one) which would be nice. And so it’s time to take a first look at which Commonwealth philatelic entities have not yet issued stamps (or are soon to do so) during 2021:-

St Vincent and The Grenadines

This means that a grand total of 65 Commonwealth philatelic entities have yet to issue stamps during 2021. Then again, there are still another 11 months left of the year for them to do so.