1391. 🇲🇾 Anyone For Deep Fried Grasshopper?

🇲🇾 Pos Malaysia will issue a set of 3 stamps and 1 miniature sheet on 19 February 2019 on the subject of 'Exotic food'. The dishes featured are sea cucumber (which I tried many years ago and found to be very unappealing), grasshoppers (which, deep fried, I recently had in an upmarket Birmingham restaurant served, improbably, with the dessert and which was appealingly crunchy but really didn't have a very nice flavour to it especially with a deconstructed tiramisu), porcupine and horseshoe crab featured on the miniature sheet. A colourful and interesting issue if, for many I suspect, not too appetising. Rating:- *****. 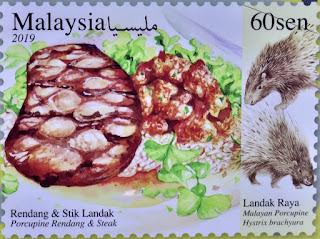 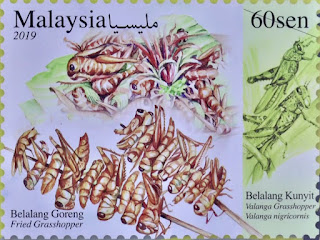 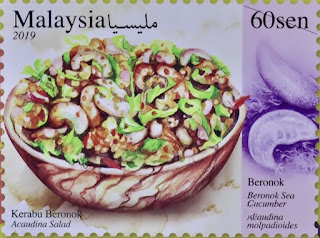 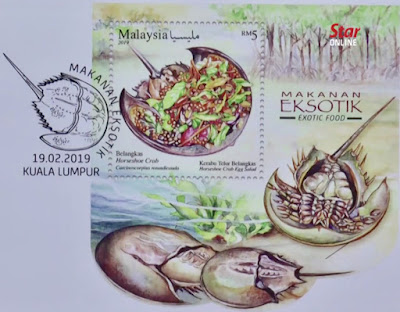 🇭🇰 Hong Kong Post will issue 6 stamps, 1 miniature sheet, 1 'mini-pane' containing 2 sets and 1 prestige booklet containing 4 different panes sold for HK$63 on 28 February 2019 on the subject of the Government air service. I'm not sure that there's a special reason why there should be a set of stamps released at this particular moment in time on this subject. The issue was designed by Lee Ying-chi and lithographed by Enschedé and perforated 13.5 x 14.5. Rating:- **. 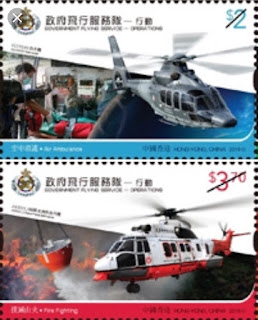 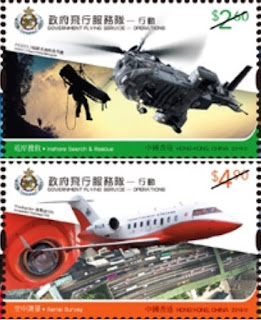 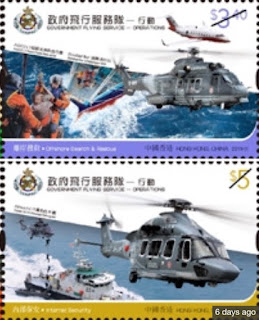 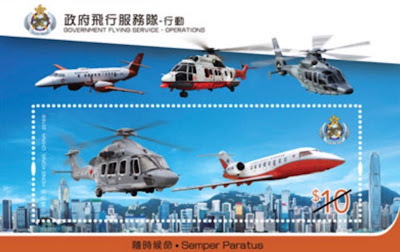 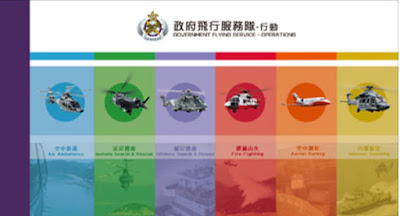 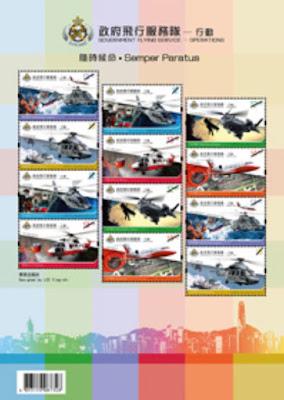 🇬🇬🇯🇪 In Blog 390 I wrote about my visit to the Jersey Post/Guernsey Post stand at Spring Stampex 2019 in London and illustrated the various Post and Go stamps which are on sale there. I forgot to include photographs I had taken of the recently introduced JE03 and GG03 desktop stamp dispensers and now do so here:- 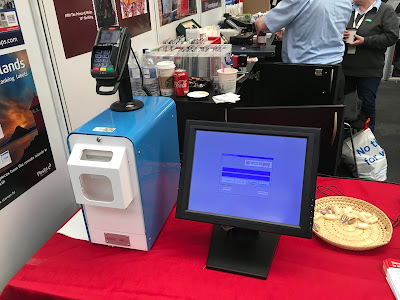 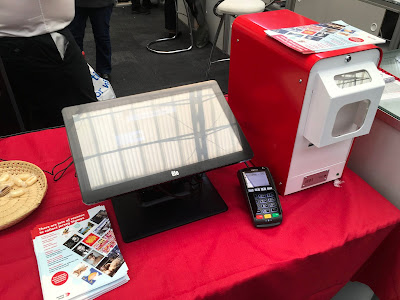 🇳🇿 New Zealand Post will issue a set of 6 stamps and 1 miniature sheet containing all 6 stamps on 6 March 2019 on the subject of 'Lighthouse perspectives' - that is - views from lighthouses. An interesting idea which manages to take advantage of the populat Lighthouse theme. The issue was designed by Hannah Fortune and lithographed by Southern Colour Print and perforated 15 x 14. Rating:- ***. 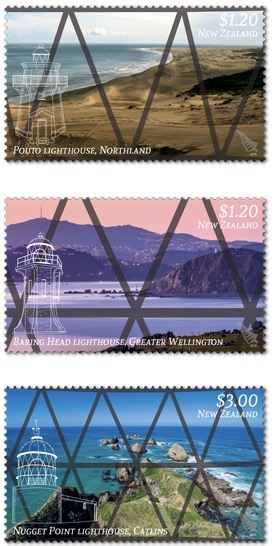 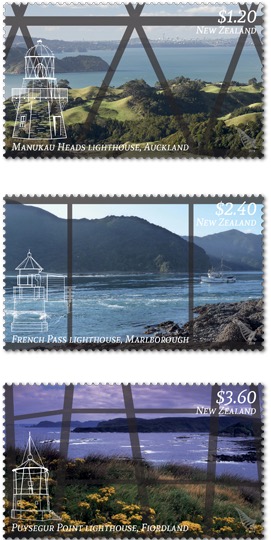 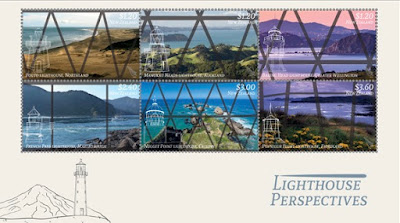 🇲🇼 In Blog 1387 I illustrated a sheetlet containing 6 different stamps which was issued by Malawi Post on 5 February 2019 on the subject of Malawi insects. I now illustrate the 6 accompanying single-stamp miniature sheets which are colourful if inelegant. Rating:- ***. 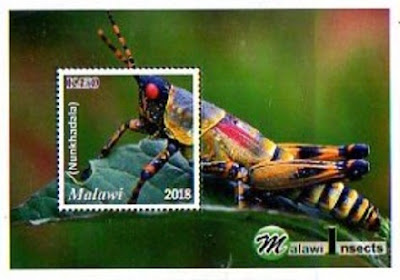 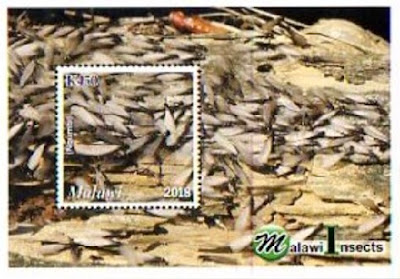 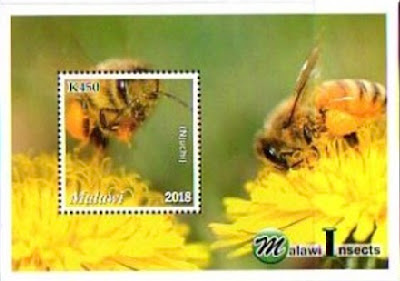 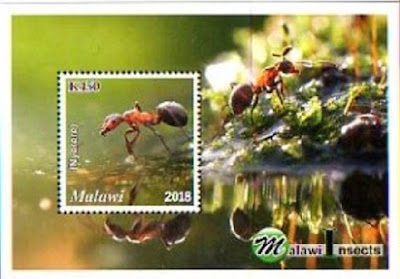 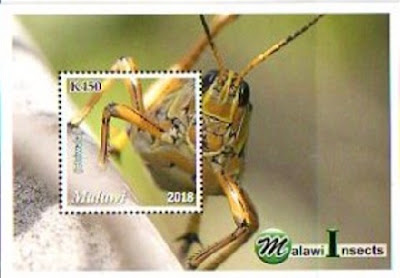 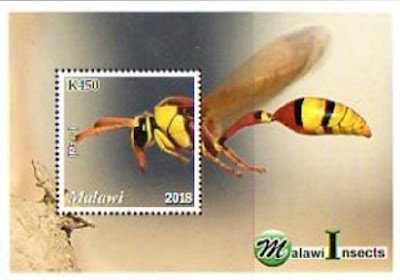 🇲🇿 Stamperija has released the first philatelic items of the year with the name of Mozambique printed on them. You might say that this is the first issue of 2019 from the country though whether or not they are actually on sale there is a moot point. There are the usual 10 sheetlets each containing 4 different stamps plus 10 accompanying single-stamp miniature sheets on various subjects few of which have any relevance to Mozambique. Particularly rebarbative is a sub-issue on the subject of 'Prehistoric humans' which, cartoon-style, depicts white-skinned people in animal skins, the woman having fashionable-looking hair, regardless of what the population of Mozambique would have looked like in prehistoric times. Rating:- 0.
Stamperija states that the 'date of issue' was 2 February 2019. 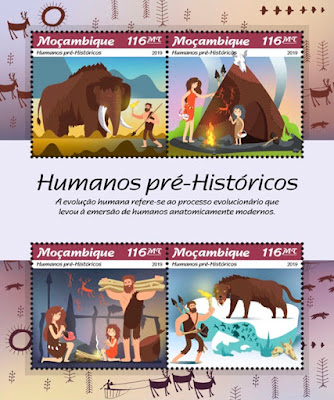 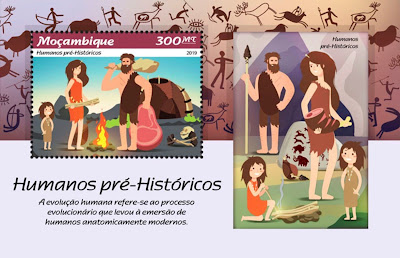