Now that the remarkable state funeral of, and the period of mourning for, the late HM Queen Elizabeth II are passed and her reign of more than 70 years steps into history where she herself may become known as Elizabeth The Great, the Elizabethan philatelic era is also ended and the Carolean philatelic age begun.

The Commonwealth, founded in 1949 with just a handful of members - United Kingdom, Ireland, Canada, Australia, New Zealand, Pakistan and India - has now evolved into a unique international association of 56 countries, some of which were never linked historically to the old British Empire from which The Commonwealth was born.

For many years the veteran stamp dealers, Stanley Gibbons, produced a catalogue, The Elizabethan, which included all the stamps issued by the various countries and territories of The Commonwealth during the reign of Queen Elizabeth as it proceeded down the years. Publication continued until, I think, the 1985 edition by which time, being entirely printed in book form and not available digitally - we were still of course in the pre-digital age - there were so many stamps to include that it was not feasible to feature all of them in an affordable single volume and publication of The Elizabethan ceased. 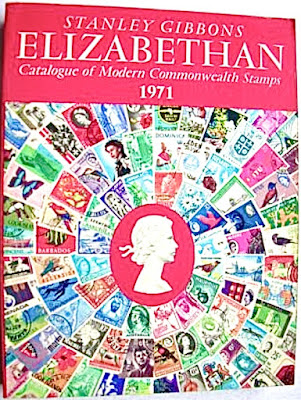 So let us start the new Carolean philatelic era with a new catalogue of Commonwealth stamps attempting to do what Gibbons’ Elizabethan did in the past - that is - to include in it all the postage stamps issued by the Commonwealth postage stamp entities during the reign of King Charles III which we date from 8 September 2022 when he succeeded to the throne. I will try to produce a list of stamps known to have been issued with a numbering system every couple of weeks or so. There will be some illustrations but many of the stamps will already have been featured in Commonwealth Stamps Opinion and so reference will be made to the edition of CSO in which the stamps were first announced and where they were illustrated to avoid repeating illustrating large numbers of stamps

Generally now, ‘countries’ do NOT issue stamps - they have them produced and sold on their behalf by governmental departments, private businesses or private philatelic agencies - and therefore it is more appropriate to include the issued stamps in the listing under headings which name the department or business or agency which release them rather than the country name; hence the stamps of Australia appear under the heading Australia Post and those of The United Kingdom under Royal Mail.

These lists will include all present Commonwealth philatelic entities as well as those countries and territories with former, and often continuing, close links with Commonwealth countries, which made an appearance in the former Elizabethan Catalogue.