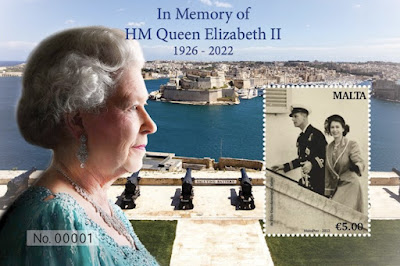 19 September 2022 - MaltaPost will issue a tasteful and dignified single-stamp miniature sheet on the day of Queen Elizabeth II’s state funeral to honour the late monarch who was Queen of Malta until it became a republic on 14 December 1974. Designed by MaltaPost and lithographed by Printex. Rating:- *****.

MaltaPost becomes the fourth postal service to announce its plans for a commemoration of the late Head of The Commonwealth there has already been news of issues from Grenada, Papua New Guinea and Tuvalu, all King’s Realms, but this is the first announcement by the postal service of a republic.

Note that the first day cover will be postmarked on the actual date of the Queen’s funeral so this may prove to be a souvenir of The Queen’s life much sought after by the non-philatelic general public. 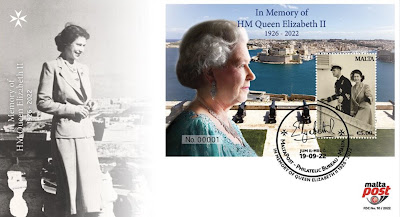