1801. 🇬🇧 Will The Archers Finally Make It On To A Royal Mail Stamp? 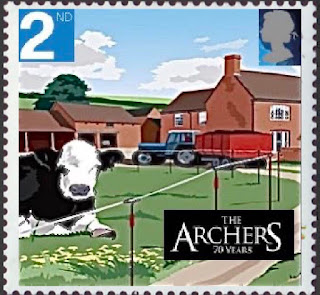 🇬🇧 In Britain, the general public could not give a fig for what subjects are featured on Royal Mail stamps in these present times. They tend not to use stamps or even write letters and so why should anyone really worry about what appears on a postage stamp which they probably will not be able to buy at their local small post office anyway? I did not have a single special Christmas stamp used on any of the Christmas cards popping through my letterbox this year and I certainly have not seen any of the multitude of other stamps released by Royal Mail on an ordinary item of mail received at my home in the past two or even three years. ‘Commemorative’ stamps, let’s be realistic, are redundant apart from being a means for Royal Mail, like other postal organisations, to make a little bit of extra money on the side. They may also be useful as a bit of national propaganda from time to time but as patriotism and love of country are out of fashion in Britain, stamps which might have that role are generally not issued for fear of offending some group or another.

But every year though, collectors still get excited, but decreasingly so I believe, about speculating what stamps are going to be released by Royal Mail in the coming new year.

1. Prince Phillip, The Duke of Edinburgh, will celebrate his 100th birthday on 26 June.

2. As mentioned in a previous Blog, 2021 sees the Centenary of a Briton, Professor John Macleod, sharing the Nobel Prize for Medicine with the Canadian Frederick Banting for his role in discovery of an insulin preparation which would save the lives of millions of people with diabetes.

3. The Archers, the world’s longest-running radio soap opera, set in the fictional English Midlands village of Ambridge, arrives at its 70th anniversary of regular broadcasting by the BBC. An issue to commemorate the anniversary has all the advantages of the programme remaining very popular among the middle classes and the elderly, who might buy any such stamps, as well as reflecting nostalgia (which Royal Mail sees as a great attraction to potential stamp buyers) for an English rural idyll of rolling countryside, simple countryside pursuits (cake baking, cricket on the village green, summer fetes, bee keeping, horse riding and so on) and decent gentle folk (with the working classes being comic and all either hardworking salt-of-the earth types (especially the women) or rogues in a mild, harmless sort of way (the males in the main part). It also has the advantage of never having been celebrated philatelically by Royal Mail before. And it does have a catchy memorable theme tune, once heard forever hummed. 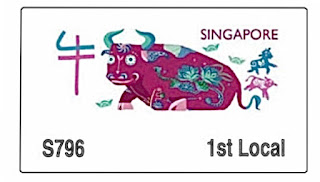 🇸🇬 Singapore Post will issue a new machine-dispensed stamp on 8 January 2021 to commemorate the Lunar new year which will be the The Year of the Ox. The design reproduces one of the designs of the Year of the Ox stamps (but reversed) which are due to be release on the same day. Rating:- ***.

🇳🇦 NamPost, the postal service of Namibia, plans to issue 3 sets of new stamps during 2021, all depicting different aspects of local natural history:-

🇲🇾 Pos Malaysia will issue a sheetlet of 10 different Se Temku (personalised greetings) stamps showing Christmas decorations on 23 December 2020 (a little too close to Christmas Day to be of any practical use on Christmas mail, I would have thought). The issue is sold only in a pack which additionally contains 3 postcards and 3 envelopes for RM25 (£4.58p). 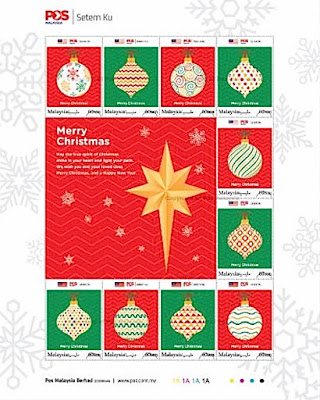