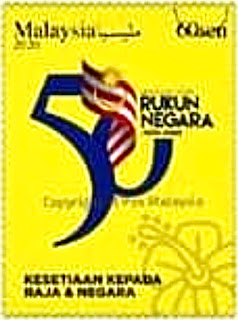 🇲🇾 As previously mentioned Pos Malaysia will issue a set of 5 stamps and 1 miniature sheet containing a single stamp on 18 August 2020 on the subject of the 50th anniversary of Rukun Negara,  the five principles of I believe in God, Loyalty to King and Country, Supremacy of the Constitution, the Rules of Law and Courtesy and Morality. Rating:- ***. 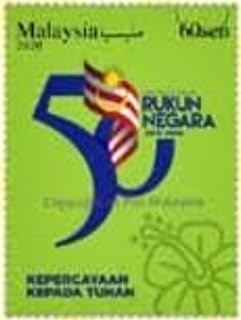 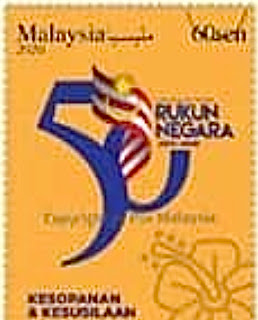 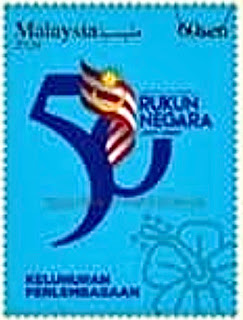 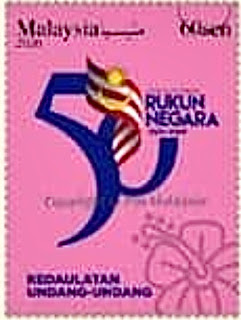 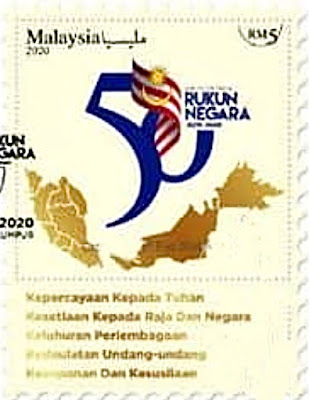 🇬🇧 The superb Norvic Philatelics Blog has just published a commentary piece by Ian Billings on the fact that Royal Mail will not be issuing any stamps to commemorate the Quatercentenary of the arrival of the Pilgrim Fathers - or whatever gender neutral term they are now known by - on board the Mayflower in America.
I tried to add a comment in response to his piece but my Google or Blogger or whichever is responsible still will not let me make comments either on this Blog or that of any other person’s so I am writing it here. I hope Ian will forgive me for reproducing part of his piece but by doing so I can put my somewhat light-hearted comment in context.
Ian comments that while Royal Mail has chosen not to commemorate the important and highly significant anniversary relevant to Britain as well as The United States it instead prefers to release what I imagine will be a vast and expensive issue of stamps on the subject of the American television and movie series Star Trek. I am curious to know how Royal Mail intends to link the subject to Britain if it even feels that there is a link that needs to be made. Here is part of the Norvic Blog:- 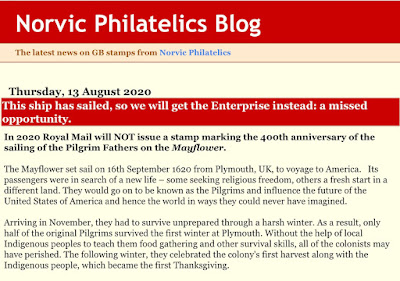 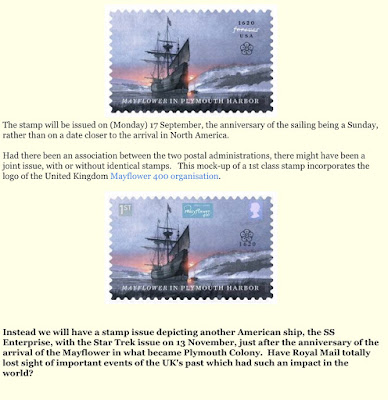 My intended comment goes something like this, “I suspect that this is to do with Royal Mail’s prevailing wish not to upset anybody. The Pilgrim Fathers are now viewed as a ‘bad thing’ because of the negative impact their arrival and settlement had on indigenous North Americans. By extension Star Trek might be viewed as a ‘bad thing’ because of the negative impact the arrival on a planet of the crew of the Starship Enterprise usually has on the planet’s indigenous alien life forms. The ‘Federation’ seems to be an advanced form of ‘Imperialism’. Therefore the issue of a set of stamps to commemorate Star Trek should be abandoned immediately as the programme celebrates imperialism and xenophobia and is therefore offensive”.
Needless to say I shall not be buying the Star Trek stamps.

Addendum - Much to my surprise my comment has appeared on Norvic’s Blog after all, so I apologise for duplication. Perhaps I will now once more be able reply directly to any comments left on this Blog. We will see.