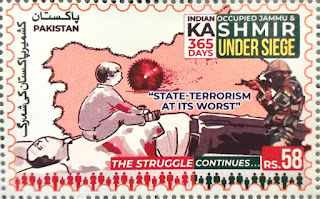 🇵🇰 There has been an ongoing sometimes military and always diplomatic conflict between Pakistan and India over the the disputed territory of Jammu and Kashmir for decades and from time to time both of them issue stamps to draw attention to their viewpoint of the simmering confrontation which could any time break out into a dire crisis. Now the postal service of Pakistan has returned to the philatelic facedown with a single stamp issued on 5 August 2020 which is titled ‘Indian occupied Jammu and Kashmir 365 days under siege’ and with a graphic design featuring an armed Indian soldier pointing a rifle at a child with blood stains on his arm and an adult male lying with blood stains on his chest and abdomen. The item also bears the inscription ‘State terrorism at its worse’ and depicts a saw cutting through the middle of Kashmir. No subtle messaging here. Strong stuff but an interesting item for anyone following the developing history of the Kashmir situation. Rating:- ***.

🇮🇳 India Post meanwhile issued a new My Stamp stamp on 5 August 2020 to commemorate the laying of the foundation stone of the new Shri Ram Janmabhoomi Mandir temple at Ayodhya which was attended by the Indian prime minister, Narendra Modi. The design features a model of the finished building. This takes the usual form of being issued in sheetlets of 12 with attached labels sold at a premium. 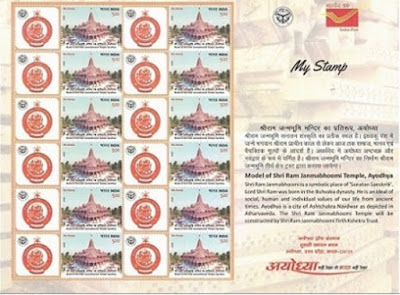 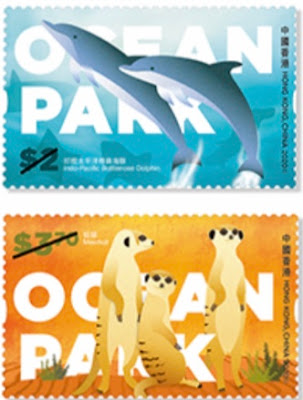 🇭🇰 Hong Kong Post will issue a set of 6 stamps, 1 miniature sheet and 1 ‘mini-pane’ containing 2 sets in blocks of six on 18 August 2020 on the subject of Ocean park, a theme park in the territory. The park is currently closed due to the COVID-19 situation and the issue does not coincide with any particular anniversary or event associated with the park and therefore the reason for issuing the stamps at this time amid a very busy new issue programme from Hong Kong Post is questionable.
The stamps, designed by Fun Fun Wong, lithographed by Enschedé and perforated 13.5 x 14.5 (P.14 for the miniature sheet), are pleasant and colourful but clearly excessive and therefore the issue’s rating is *. 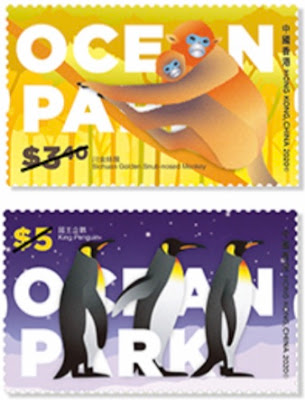 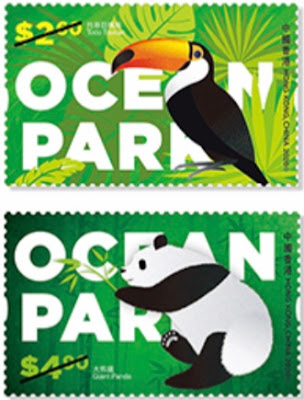 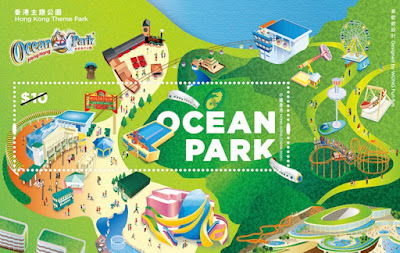 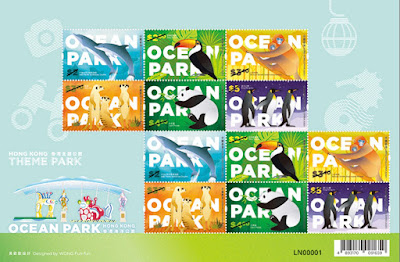 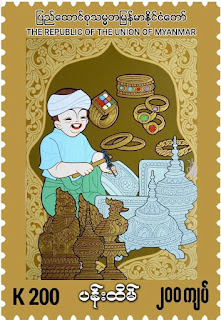