🇬🇧 Royal Mail will issue a large number of philatelic items on 17 March 2020 on the subject of the character James Bond created by Ian Fleming in a long series of novels and subsequently an even longer series of films. The release of the 25th movie of this film series is the excuse provided by Royal Mail for issuing this latest expensive philatelic extravaganza dealing with yet another aspect of  popular modern British and, sometimes, foreign culture.
The issue is made up of 6 stamps, 1 miniature sheet containing 4 different stamps with additional hidden features, 1 counter booklet containing 4 x 1st class rate Machin Head definitives and 2 x 1st class rate stamps from the set, along with 1 Prestige booklet costing £16.99 and containing the stamps from the set and miniature sheet as well as a pane containing 2 x 2nd class rate Scotland regional stamps, 2 x 1st class Union Jack greetings stamps and 2 x 2p and 2 x 2nd class rate Machin Head definitives the definitives have code M19L MPIL. As well as all these there is also a ‘Collectors sheet’ containing 5 x 1st class and 5 x £1.60 Machin Head definitives with attached labels and costing £12.60 and there is also, inevitably I suppose, a ‘Limited edition’ premium priced special edition of the Prestige booklet costing £64.99 .
An exciting set nicely designed by Interabang and lithographed by International Security Printers and perforated 14.5. Rating:- ***** (for the basic items of this issue) 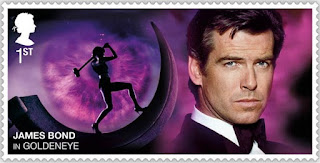 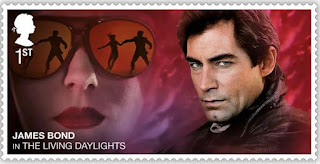 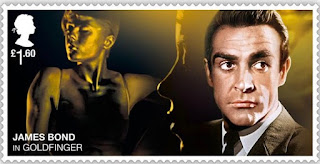 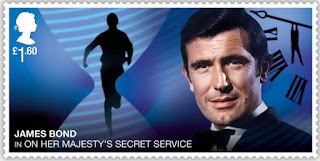 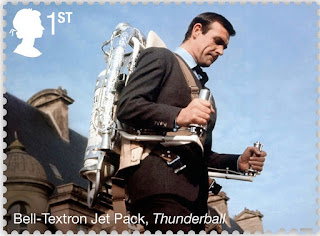 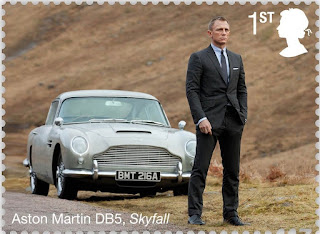 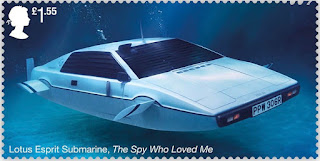 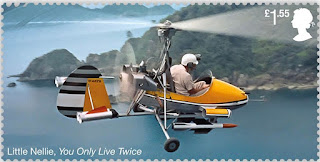 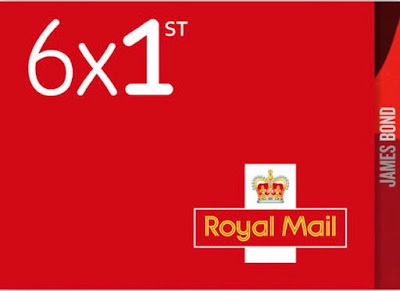 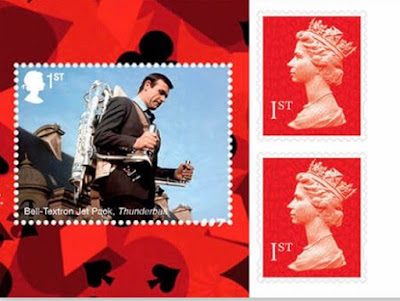 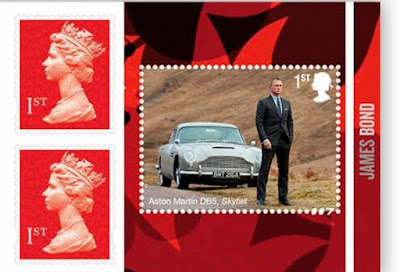 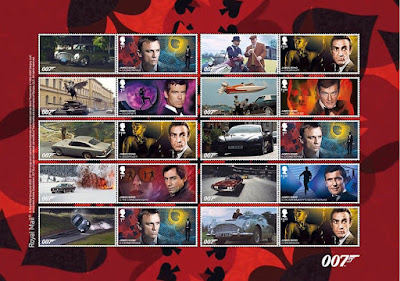 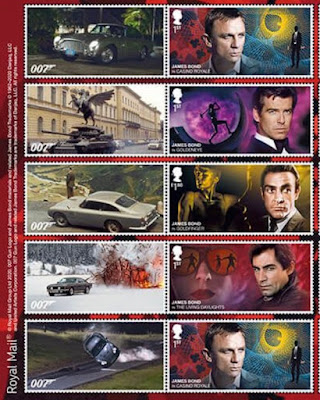 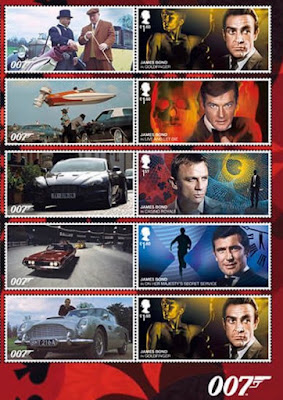 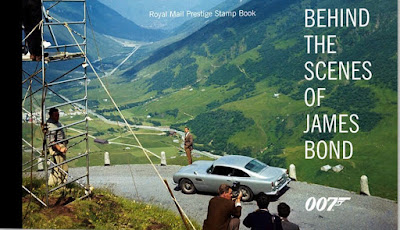 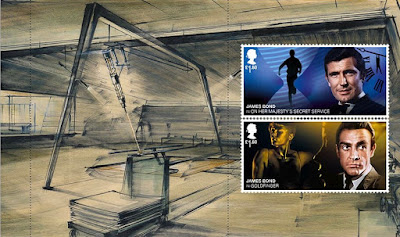 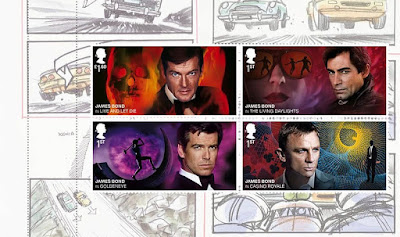 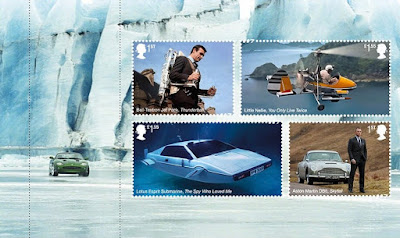 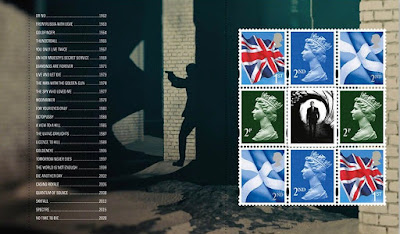 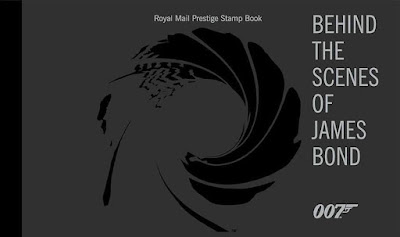 Royal Mail previously commemorated the James Bod character when it issued a set of 6 stamps, 1 miniature sheet and a Prestige booklet on 8 January 2008. The stamps depicted covers of various editions of some of the books and were designed by A2 and lithographed by De La Rue. 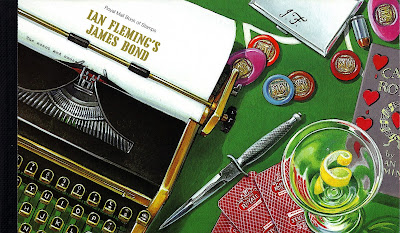 Subsequently a ‘Collectors sheet’ was released in 2012 to commemorate the 50th anniversary of the publication of the first James Bond book. The sheet contained 10 Union Jack stamps with attached labels each depicting a different poster from 10 of the movies. 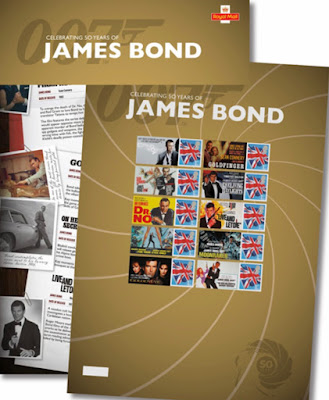 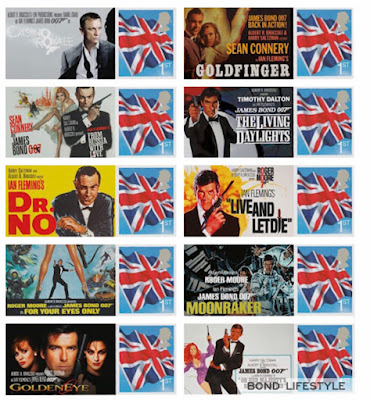 Guernsey Post issued a set of 6 stamps, 1 miniature sheet and a gold foil miniature sheet (‘sealed in acrylic crystal’ and sold in a ‘limited edition’ of 500 for a preposterous £95) on 30 July 2014 to commemorate the 50th anniversary of the death of the character’s creator, Ian Fleming. The issue was designed by Two Degrees North and lithographed by BDT International Printers. 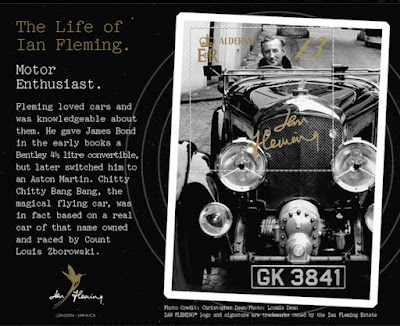 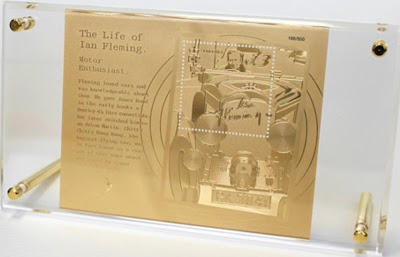 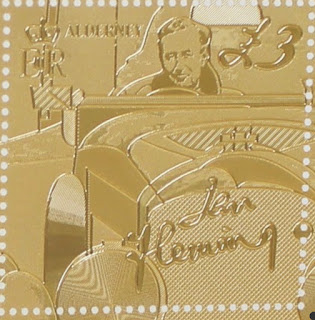