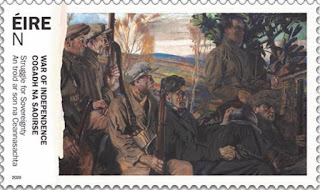 🇮🇪 An Post, the Irish postal service, released 1 stamp on 20 February 2020 to commemorate the Centenary of events which took place during the Anglo-Irish War fought between 1919 and 1921.
Several events leading up to the Easter Rising of 1916 (see Blog 731) have previously been commemorated philatelically and the Rising centenary itself was featured on a large number of stamps during 2016 but after 1916, with the Easter Rising crushed, the British Government turned its attention to defeating the Triple Powers as the First World War dragged on towards November 1918.
On 17 January 1919, the Irish rebels summoned the Dáil Éireann, the forerunner of the Irish Parliament (the Centenary of which was commemorated by a pair of stamps released on 17 January 2019, see Blog 1362) though the only party to be represented in it was that known as Sinn Féin. The Dail issued a Declaration of Irish Independence and set up the Irish Republican Army (IRA). Michael Collins set up ‘The Squad’, a group of gunmen responsible to himself who worked as assassins of the police and suspected informers within the IRA.
On the very same day that the Dáil was convened, 21 January 1919, members of the IRA attacked and shot two policemen in County Tipperary. This event, known as the Soloheadbeg Ambush is considered to be the opening incident of the Anglo-Irish War. The IRA then began a general campaign of attacking government property, staging raids to steal arms and funds and murdering important figures in the administration and government, the first victim of which was Resident Magistrate John C Milling who was shot dead in County Mayo for sending Volunteers to prison for illegal assembly and drilling.
The Irish people were firstly disapproving of the violence but the government’s heavy-handed response changed the general population’s opinion. The IRA’s main targets were the 9500 members of the mainly Catholic Royal Irish Constabulary and on 11 April 1919 the Dáil announced a policy of ostracism against the RIC and the policemen became demoralised with many resigning from the police force. In 1919 the IRA killed 11 RIC policemen and 4 members of the Dublin Metropolitan police as well as injuring another 20 RIC officers.
Strikes were held against the government in various parts of Ireland and strikes by dockers and railway workers greatly affected the government’s ability to support the British troops in Ireland.
The stamp depicts the second version of the painting Men of the South, also known as An IRA Column, by Seán Keating. The paintings date to late 1921 when the Anglo-Irish War was drawing to a close and were based on photographic studies carried out by the artist in his studio of the gunmen. The first and second versions of the painting are depicted below together with one of the photographic studies. The stamp was designed by Ger Garland and lithographed by Enschedé and perforated 13.5 x 14. 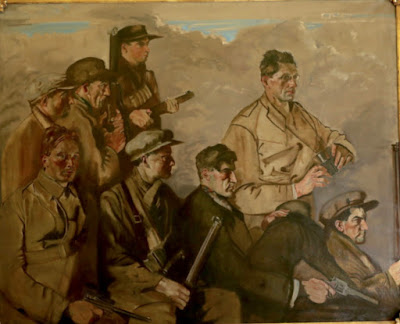 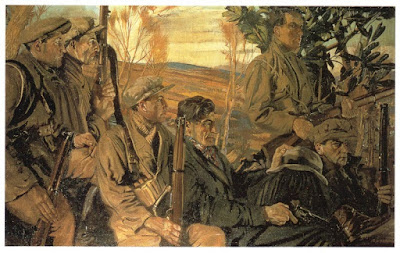 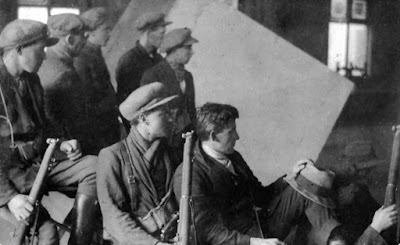 A second stamp in the set was preadvertised in An Post’s quarterly bulletin, The Collector, but made a non-appearance on the prescribed date of issue. It was intended that this second stamp should commemorate the Centenary of The Government of Ireland Act passed in the Westminster Parliament on 11 November 1920 and which passed into law on 23 December 1920. The law set up two distinct entities with Home Rule in the island of Ireland - that which was made up of the six counties of Northern Ireland and the larger entity of southern Ireland. It was intended that the design of the proposed stamp would depict a map of the two entities and of the border between them. I assume, without seeing any official explanation, that the stamp was withdrawn following political pressure since the depiction of a non-United Ireland was just asking for trouble. This may be particularly pertinent as Sinn Féin, following recent parliamentary elections in Ireland, may be on the verge of forming the government for the first time in a century.
There’s another philatelic lesson here - the issue of stamps depicting maps showing national boundaries is as dangerous as releasing stamps depicting flags and national emblems. 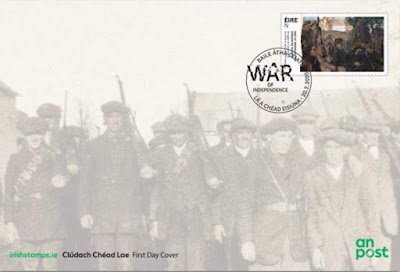 Sadly I can only include here a poor quality picture of the Map stamp. Interestingly I cannot now download the first edition of 2020 of The Collector and I assume that the non-issue of the Map stamp featured in it may be the cause of its disappearance. 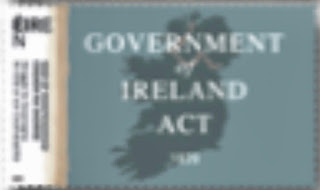 An Post intends to issue another 2 stamps marking the Centenary of the war in the latter part of the year and we will take the story forward then.