🇳🇷 The Republic Of Nauru commemorated its 50th anniversary of Independence on 31 January 2018. A number of regional leaders including the Presidents of Micronesia, The Marshall Islands, Fiji, Vanuatu, the Governor General of Australia, the prime ministers of Samoa, Tuvalu and Cook Islands and representatives of New Zealand, Japan, Indonesia, Taiwan and Palau all attended the celebrations. There were also representatives present, bizarrely, from Abkhazia and South Ossetia, both states largely unrecognised by the international community.
So far I have not been able to find any news of a stamp issue which commemorates this important anniversary.
Below is a photograph of the President of Nauru, Baron Waqa, addressing the guests at the Independence celebrations. 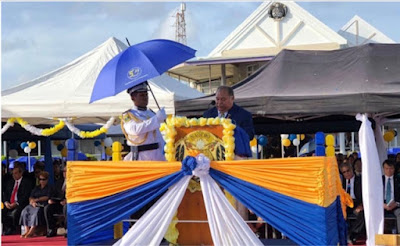 🇲🇺 Following on from Nauru, the Republic Of Mauritius will celebrate its 50th anniversary of Independence on 12 March 2018. Again, I have not yet seen the details of any stamp issue related to this anniversary but I don't doubt that such an issue will be released soon. 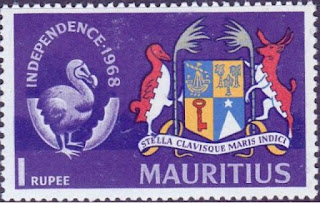 🇸🇸 The various surcharges issued by the postal administration of South Sudan during 2017 (see Blogs 1134, 1149 and 1165) are certainly more complicated than they may initially appear to be. There is a clear difference in the two 300SSP on 1 SSP values of the 2011 Flag stamp which are depicted below.
I have also noted that there are 2 varieties of surcharge on the 2012 Shoebill stamp - the 150SSP, 200SSP and 250SSP values have surcharges in either seriffed or sans-seriffed lettering. I have not found an example of the 150SSP on a blue sun surcharge with sans-seriffed lettering.
In Blog 1134 I mentioned the surcharges on the Bearded vulture stamp of 2012 but did not draw attention to the fact that the 75SSP value has also been produced in seriffed and sans-seriffed lettering.
I suppose it is possible that other surcharge values also exist in the 2 formats of lettering.
These surcharges have certainly made this country's stamp issues very interesting. Rating:- *****. 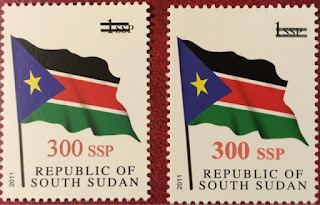 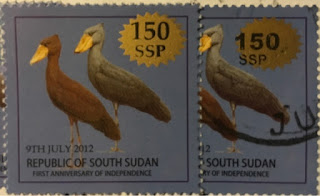 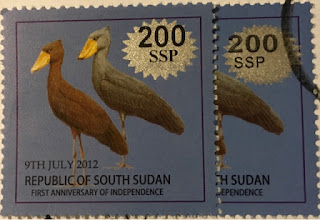 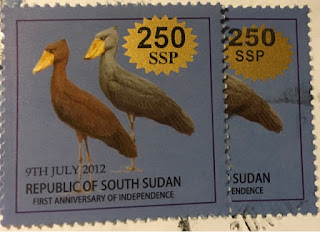 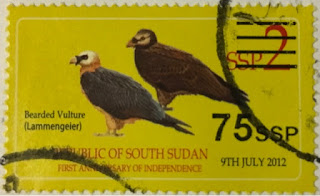 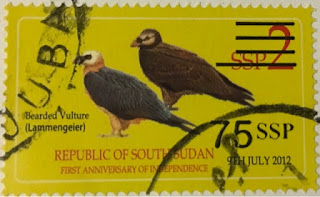 🇳🇬 Will the Nigerian Postal Service issue a set of stamps to commemorate the country's first ever participation in the Winter Olympic Games to be held soon in South Korea? The country is sending a Women's Bobsleigh team to the Games in PyeongChang. It appears that NiPost issued no stamps during 2017 so this unique event in Nigeria's sporting history offers a chance for it to renew its stamp issues with an interesting set.
The postal service of Jamaica issued a pair of stamps in 1988 to commemorate its men's Bobsled participation in the Winter Olympic Games held in Calgary. At the time this seemed like a rather improbable issue but the team was greatly celebrated and hopefully the Nigerian Women's team will follow in the Jamaican team's footsteps. 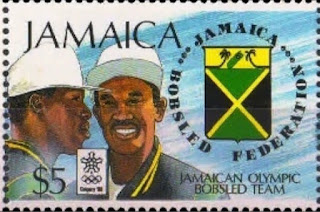 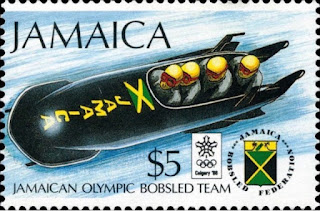 🇱🇹 And so, inevitably, to this week's paraphilatelic items from Stamperija which have the name of a Commonwealth territory printed on them. This week it is Solomon Islands which benefits from being associated with 12 sheetlets, each containing 4 different 'stamps', and 12 miniature sheets hardly any of which can be said to feature subjects of relevance to that Pacific island country.
The featured subjects are, for the record, Kingfishers, Big Cats, High speed trains, Orchids, Kangaroos, Horses, Extinct species, Dolphins, 110th anniversary of the Scout movement, 85th birth anniversary of Elizabeth Taylor, 95th anniversary of the death of Ernest Shackleton and the 80th death anniversary of Pierre de Courbertin. The stated 'date of issue' is 7 December 2017. The total face value of this little lot is 960 Solomon Islands dollars which is equal to £87.94p! Rating:- 0. 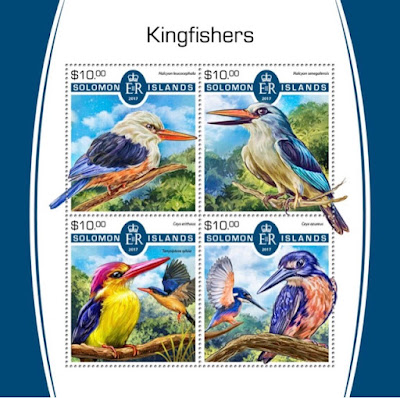 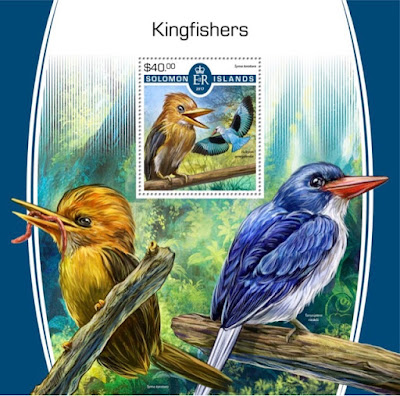