🇦🇺 The husband of Queen Elizabeth II, the soon-to-be 96 year old Duke of Edinburgh, will be featured alongside his wife on one of the 2 stamps to be released by Australia Post on 4 April 2017 to commemorate the Queen's 91st Birthday. The issue also acknowledges the Platinum Wedding anniversary of the royal couple which falls later this year on 20 November.
The issue is made up of 2 gummed stamps, 1 gummed miniature sheet, 1 x $1 self-adhesive stamp from a booklet of 10 and 1 x $2.95c stamp from a booklet of five.
Despite their advancing age the royal couple continue to fulfill their duties and this seems like a worthy commemoration particularly for the Prince who really now is of an advanced age. His appearance on this stamp goes someway to make up for the intense meanness of spirit towards The Duke which swept Australia in 2015 when he was awarded the honour of the Knighthood of the Order of Australia at the recommendation of the then Australian prime minister, Tony Abbott, as a "recognition  of his long life of service and dedication".  Australian politicians and the country's press reacted to the award of the honour in such a vicious way that Abbott was eventually forced to resign and the ungracious way that Australia had behaved to an elderly man showed the country up in a bad light. At least Prince Philip has now been treated more graciously by being featured on an Australian stamp.
The issue was designed by Simone Sakinofsky and lithographed by RA Printing and perforated 14.5 x 14. Rating:- *****.

Collectors will not be surprised to find that the royal birthday issue is just one of a multitude due to be released by Australia Post in the next couple of months.
A set of 4 gummed stamps, 1 gummed miniature sheet, 2 self-adhesive $1 stamps sold in booklets of 10 (5 se-tenant pairs) and a $30.95c "Prestige booklet" on the subject of rare Australian gemstones will be issued on 30 March 2017. The issue was designed by Gary Domoney of Visua and lithographed by RA Printing and perforated 14.5 x 14. An attractive enough issue but against a background of extremely excessive issuing there seems be to no special reason for its release so I rate it:- *. 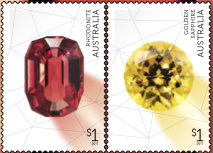 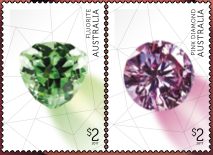 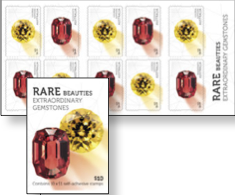 The designs will also be used as a basis for 4 miniature sheets, one being issued on each of the 4 days of the Melbourne 2017 International Philatelic Exhibition from 30 March to 2 April 2017. Each one of these sheets will additionally be issued with postmarks applied and individually numbered in limited editions of 250. Rating:- 0.

Australia Post will release 2 genuine commemorative stamps on 30 March 2017 which celebrate the anniversaries of 2 notable Australian artists - the 150th birth anniversary of the birth of Sir Arthur Streeton and the Centenary of the birth of Sir Sidney Nolan. The stamps were designed by Lynette Traynor and lithographed by Ego and perforated 14 x 14.5. Rating:- *****.

Australia Post will also issue a set inscribed "Australian Antarctic Territory" on 7 March 2017 on the subject of East Antarctic deep sea creatures. The set is made up of 4 gummed stamps and 1 gummed miniature sheet which were designed by Stacey Zass and lithographed by Ego and perforated 14.5. Rating:- ***.

The final upcoming issue from Australia Post is another important commemorative - the 4th part of the five year long series which commemorates the Centenary of the First World War. The issue is made up of 5 gummed stamps, 1 gummed miniature sheet, 5 self-adhesive $1 stamps sold in a $10 booklet of 2 x 5 different designs and a $20.95c prestige booklet which is titled "Ties to Home". The stamps feature aerial warfare during World War I, a scene from the Third Battle of Ypres, Support for the troops at home, the Sinai-Palestine Campaign and the war correspondent, Charles Bean. The issue was designed by Phil Ellet of Creative Ethos and lithographed by Ego and perforated 14.5. A well designed set that commemorates an important subject with taste, rating:- *****.