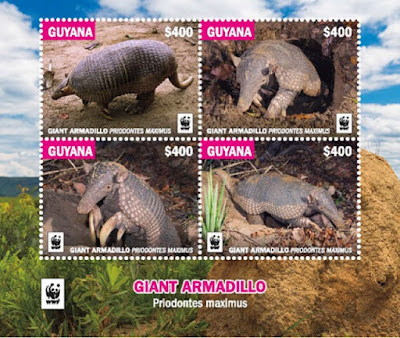 🇬🇾 The World Wide Fund For Nature (WWF) stamps issued by IGPC in the name of Guyana on 17 November 2016 which depict the Giant armadillo appears on IGPC's January 2017 new issue listing with an additional item not mentioned in Blog 910 - a miniature sheet of 4 stamps (1 of each design). No-one can dislike stamps which depict such appealing creatures and this additional miniature sheet is an attractive item. Rating:- ***.

This latest listing of issues from IGPC is rather interesting. Many of the items on it were shown on the previous month's list and very few of them are the usual IGPC-produced items. This is a pattern which has been going on for some months - there has been an obvious decline in the number of IGPC-designed and manufactured products. Some products have carried on appearing - stuff related to the Chinese New Year (it seems that IGPC's Beijing office is more important than that in New York nowadays with so many China-related products) and stamps related to WWF themes, which have a guaranteed market, and Star Trek-themed items which probably have a market among the enthusiasts of the television programme rather than among stamp collectors, continue to appear.
I can not recall so few IGPC produced items being listed on its website and the list having to be swollen with items produced by other entities such as Guernsey Post (some issues going back to 2015), the Israel postal administration and Bhutan Post. The list is even swollen by the inclusion of "Star Trek" coins. Postage stamps are quite expensive to produce if a respectable  security printing company is employed in their production. I wonder if there are problems at IGPC which are leading to this reduction in the release of IGPC-produced stamps. I look forward to seeing IGPC's February new issue list.

🇸🇬 Singapore Post has issued a "My Stamp" sheetlet of 10 identical stamps with attached labels on the subject of The Year of the Rooster. The labels are charmingly amusing. Rating:-***. 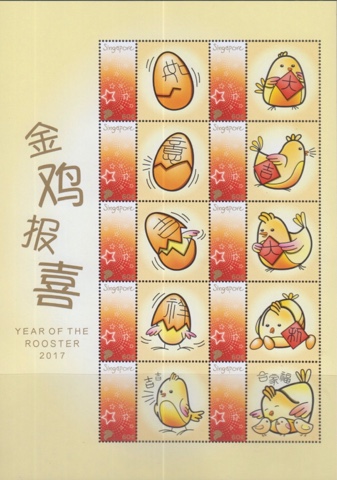 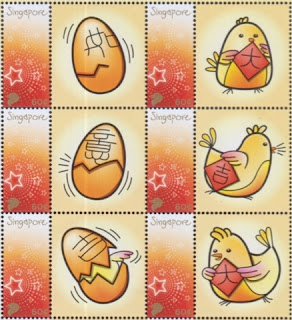 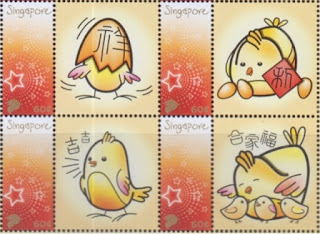 🇱🇰 Sri Lanka Post Issued a single stamp on 3 February 2017 to commemorate National Integration and Reconciliation Week which had been held from 8 to 14 January. The rather unexciting design depicts a cliched white dove against the background of a map of Sri Lanka. Rating:- **. 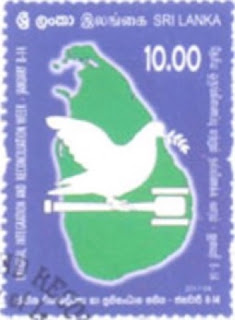 🇯🇪 In Blog 857 I listed the proposed new issue programme from Jersey Post for the first half of 2017 and in Blog 900 I mentioned and illustrated the new shell Post and Go stamps which will be launched at Spring Stampex 2017 in a few days time. It's already a packed programme and greedy little Jersey Post has many more "goodies" up its sleeve. As well as the Shell labels Jersey Post will also be selling "Jersey Flag" labels with the additional inscription "HM The Queen/Accession 1952" at Stampex from 15 February 2017. The issue will be sold in the inevitable "Collectors strips" of 6 different values. The cost of a strip will be £4.38p. Rating:- 0.

Cashing in on the domestic stamp fairs market, Jersey Post will be selling Post and Go labels at the Southern England Stamp Show to be held in Farnborough in Hampshire on 10 and 11 March 2017. The issue will be made up of Collectors strips of the "Jersey Crest" labels with the added inscription "Southern England Stamp Show 2017" dispensed from kiosk B002. This suggests to me that there will not be a kiosk situated at the stamp fair but previously dispensed labels from the "back office" kiosk will be sold across the counter (the list of dealers at the show includes Jersey Post (Post and Go) but whether it includes a kiosk is not clear). Apart from the dealer list I do not see any mention of Post and Go kiosks being used at the Stamp Show in the advertising for the event - so far - and if that is the case then the issue of labels commemorating the event is really nothing but sheer opportunism. The price of a strip is £4.38p for those who must buy it. Rating:- 0.
Post scriptum  - The Intelligent AR website has now announced that kiosk JE01 will be present at the Stamp show and that the new shells labels will be dispensed from the machine along with the Crest labels with the added inscription. (8 February 2017).

🇬🇮 I'm interested that there has been no announcement of new Post and Go stamps from the Gibraltar Philatelic Bureau to coincide with Spring Stampex, as has happened before, just as there were no new Christmas labels in 2016. There's still a few days to go so we may yet discover new Stampex-related products being announced for Gibraltar or perhaps sales are not as good as they once were and not worth the effort.
Coupled with the apparent slowing down in IGPC western-orientated issues as mentioned above along with this possible slowing down in Post and Go issues from Gibraltar, one just wonders if things are beginning to change. Ever hopeful!

🇮🇪 The previously mentioned (see Blog 897) single stamp from An Post, the postal service of Ireland, on the subject of "Love and Marriage", presumably intended for use on mail associated with St. Valentine's Day, was issued on 2 February 2017. The self-adhesive stamp was lithographed in booklets of 10 and "collectors strips" of 2 identical stamps by Cartor and perforated 13. The stamp was designed by Zero-G. Rating:- **. 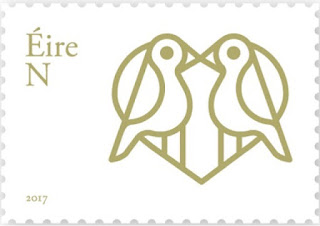 🇧🇹 Bhutan Post issued a sheetlet of 6 different stamps and 1 miniature sheet on the subject of "The six elements of longevity" during 2016 though I do not yet know the precise date of issue. This is a very interesting and colourful issue and continues the programme of highly relevant issues which have been coming out of Bhutan in recent years. Rating:- *****. 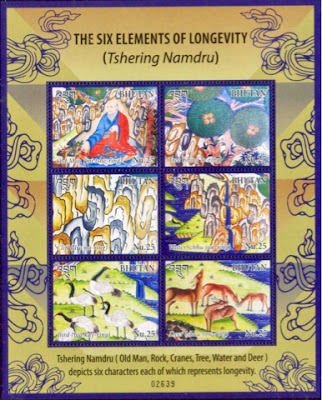 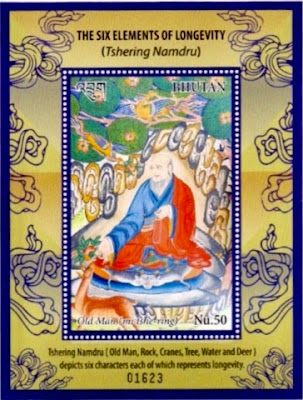