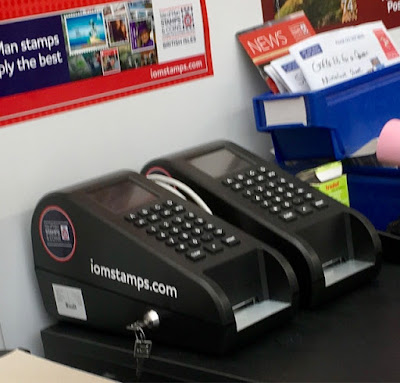 🇬🇧 Against my better judgement I embarked on a train to London and endured the enormous crowds at Euston Station and on the underground where numerous elevators were being serviced thus adding to the crowding and made my way to Islington and the Business Centre there where Spring Stampex 2017 looked like it was breathing its last gasps. It was Saturday - the final day - but the whole place looked pretty lifeless or at least like something out of the 1950s.
I was reminded of the movie which I think had the title "Dawn Of The Dead" where zombie-like figures were wandering around aimlessly looking like they were in need of resuscitation as they shuffled and stumbled past ramshackle stalls, most of which seemed to be doing very little business. Goodness, someone needs to take hold of this "national" exhibition and breathe fresh life into it.

🇬🇮🇬🇬🇮🇲🇯🇪 The Royal Mail stand seemed to have a few people buying odds and ends - there were many products to buy - and there were one or two using the various "Post and Go" kiosks. There was a very crowded stand which housed Guernsey Post, Royal Gibraltar Post Office, Jersey Post and Isle Of Man Post Office where those selling their products from each administration dealt with only their own stock so that the collector who wanted to buy stamps from all 4 postal services had to wait for the attention of 4 different assistants rather than having the convenience of dealing with just one individual. When I visited the stand I suppose I must admit that this was not too inconvenient as there were not many people wanting to make purchases (though rather more than the unfortunate Kyrgyzstan Express Post stand and the Turkish Post Office stand).
The by far most interesting items to buy at the Isle Of Man Post Office stand were the new "Variable Value" stamps. There were two machines at the stand on which the values were printed on to the basic stamp designs (see illustration at the head of this Blog) and it was interesting that the text as printed off the machine is different from that on the stamps being sold to collectors by the philatelic bureau (see illustrations below). 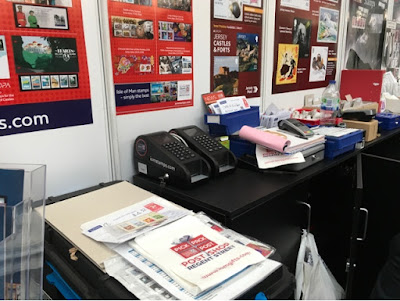 I had a session at the "Post and Go" kiosks - I have long given up buying "Collectors strips" and taking on the costs that that involves but now just buy a single example of the lowest value available and that is perfectly suitable for my needs and pleasingly cheap. Indeed I think I'm starting to enjoy Post and Go items again and not experiencing the extreme annoyance of spending so much on the stuff.
I also bought a single example of the Royal Mail special miniature sheet being sold exclusively at the exhibition in a limited edition of 6000. Bearing in mind that this was the last morning of the show with only a few hours left, my sheet was numbered 2581 which, if the sheets were sold in strict numerical order, means that less than half of the sheets had been sold. This suggests one of two things - either the number of visitors to Stampex was very small or there had not been much interest shown by those collectors attending in buying the sheets. Of course they may not have been sold in numerical order but if they were then with less than 3000 likely to be around they become quite a rare item. Of course Royal Mail could unload them on to a dealer but it may make a Royal Mail think twice about producing such items at future shows. 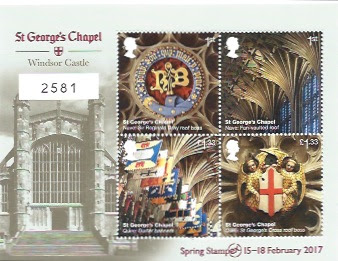 I spent far less time at Stampex than I had intended to as there was so little to interest me. Dealers in new issues have all but disappeared especially now that Nigel Haworth no longer takes a stand there. I tried to look at the exhibits but found everything too close together to be able to view them without frequently having to move aside to let people walk by and this did nothing to increase my will to concentrate on the exhibits.
I was relieved to leave the Business Centre and to head back to Angel Station. My visit to Stampex had left me feeling thoroughly dispirited. In the, er, Conveniences, I had heard a couple of dealers saying to one another, "It's convenient our stands being so close to the toilets" with the reply, "Yes but it would be nice if some of the customers took a look at our material on the way here". That sounded like someone who was not altogether happy with the business he had done at the exhibition.
I suppose most of the people who were there will be back in the autumn excepting those who have died but whether there will be anything there to attract new collectors is a question which needs addressing urgently.

🇬🇧 Meanwhile, just to lift the spirits that little bit more, and just when I've said that I'm starting to enjoy Post and Go stamps again, Royal Mail's Post and Go news brings us details of a whole flood of Museum labels.
Thus we are told that the "Mail by Rail" labels will be sold in 1st Class strips at the Steam GWR museum in Swindon from 20 February to 15 March.
IAR kiosk A005 will be moved from the Royal Marines Museum in Plymouth on 24 February to be operational at the East Anglian Railway Museum in Colchester from 20 March with Union Jack and Locomotive labels being identified by the added inscription "EARM".
Kiosk M005 which is currently situated at Croydon Enqury Office will be relocated elsewhere in March. These relocations all suggest to me that sales of Post and Go labels at these various sites have been poor. I have noticed on a number of visits to the Stratford upon Avon Shakespeare Birthplace gift shop that the kiosk has never been used by anyone else apart from me (at the times I've been in the shop) despite numerous tourists milling around buying trinkets to take back to the furthest corners of the world. It was only on the first day of operation that others - all stamp collectors or dealers - were obtaining labels from the machine.
The problem is, I believe, that Post and Go labels just aren't interesting enough. If they had more interesting designs with subjects relevant to the individual sites where they have been placed, I'm sure they would be far more to desirable to collectors and the general public alike. The rail museums are fortunate in having Locomotive designs and Mail By Rail stamps to be put on sale but even those are becoming dull and repetitive.
Posted by White Knight at 04:19