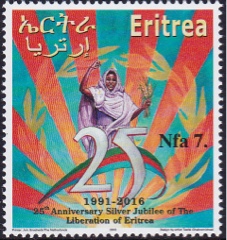 Currently, Eritrea, which was under British rule from 1941 to 1952 but at present is something of a pariah state under the rule of an oppressive government which has led to many young Eritreans fleeing from the country, has issued a pair of stamps to commemorate the 25th anniversary of the country's liberation from rule by Ethiopia to which country Eritrea was handed by the British. I do not know the date of issue at present but suspect that it was probably 24 May 2016, the precise anniversary date.
The issue was designed by Teslai Ghebraimichael and lithographed by Enschede. An interesting issue from a postal service with a very conservative new issue policy. Rating:- *****. 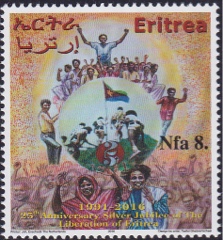 Prior to this issue, the previous releases from the Eritrean Post Office dated back to 2013; one was another one of those sets which commemorate Chinese diplomatic relations with a particular country and donated by the Chinese to that country. The issue appeared on 27 May 2013 to commemorate the 20th anniversary of Sino-Eritrean diplomatic relations and took the form of a sheetlet which contained 8 different stamps featuring Chinese and Eritrean subjects. This was yet another interesting and attractive issue and was the first issue to appear since 2011. The issue was designed, not surprisingly, in China by Ma Xiao Ling.
Also issued in 2013, were 8 new definitive stamps, released on 27 June 2013, which depicted a view of Ge'a'lo and which also were lithographed by Enschede. (See Blog 358). 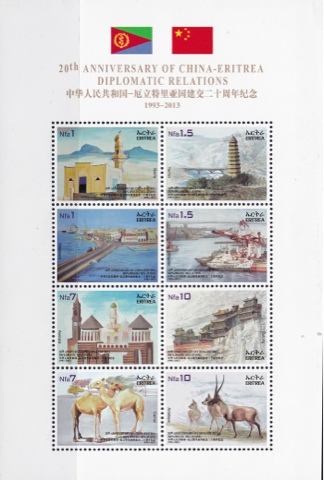 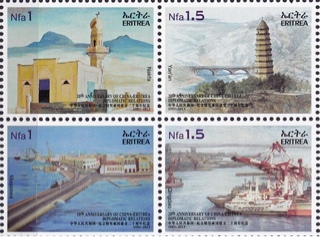 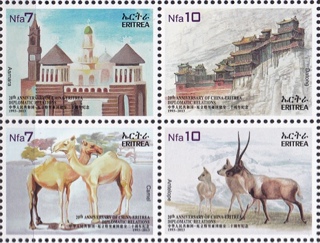 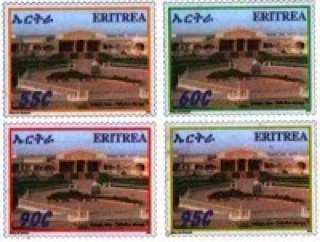 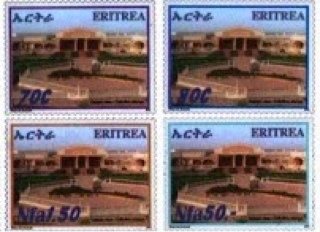 Another item has appeared which commemorates the Achievement of Queen Elizabeth II in becoming the longest reigning British monarch. I have not yet seen any information about the set and therefore do not know the date of issue. The item is a sheetlet of 13 different stamps and a double-sized label plus a single-stamp miniature sheet from the Turks And Caicos postal administration on the theme of the travels of Queen Elizabeth II. The issue is rather unusual for a philatelic item coming out of he IGPC stable. Rating:- ***. 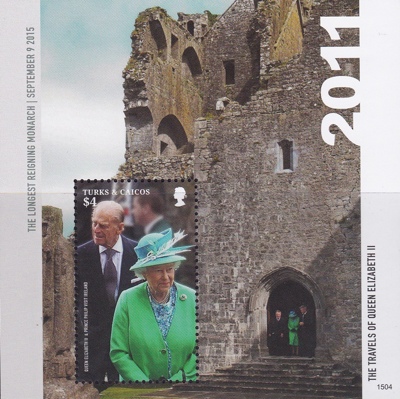 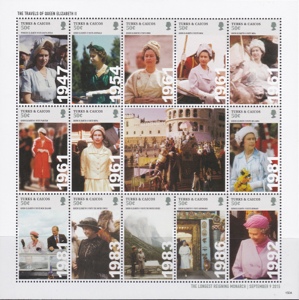 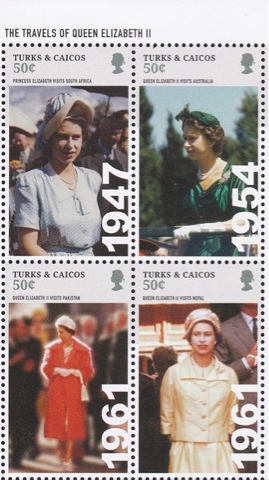 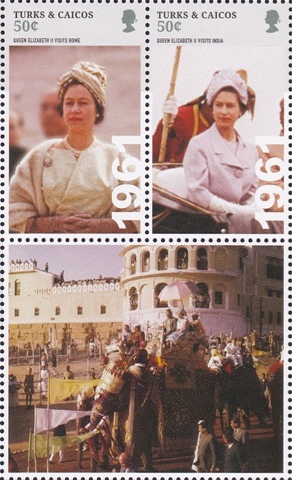 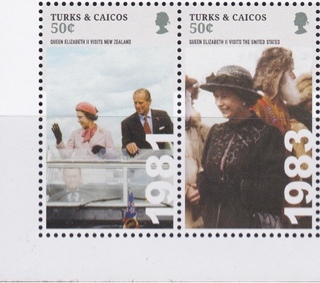 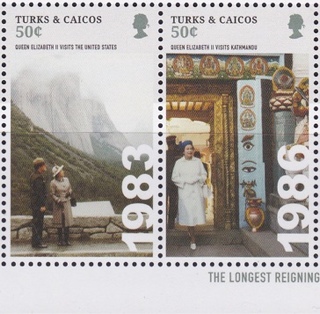 Pobjoy Stamps has announced another excellent new issue from the Tristan Da Cunha Post Office. A set of 4 stamps will be released on 14 August 2016 to commemorate the Bicentenary of the establishment of the British garrison on Tristan Da Cunha. The very interesting and beautifully illustrated set was designed by Robin Carter and lithographed by Cartor and perforated 13.5. Rating:- *****. 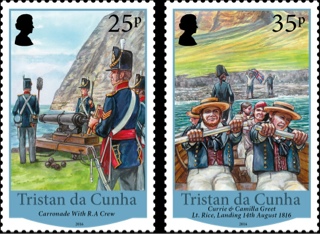 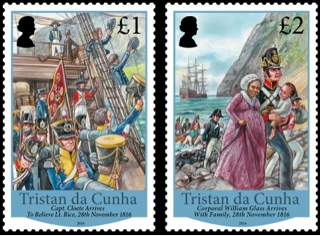 Fiji Post has released a set of 4 stamps on the subject of the 80th anniversary of the Rotary Club of Suva. The designs appear to show items which have purchased particularly for health services in Fiji by Rotary including a dialysis and Braille machines. I do not yet know the date of issue. Rating:- ****.
Fiji Post continues to release excellent and sometimes superb stamps along with Vanuatu Post and the Kiribati Post Office while some of their South Pacific neighbours such as Samoa Post, Tonga Post and the awful Tuvalu philatelic bureau have sacrificed their national and philatelic reputations by allowing some pretty awful stuff to be released in their names by foreign agencies in exchange for 30 pieces of silver. 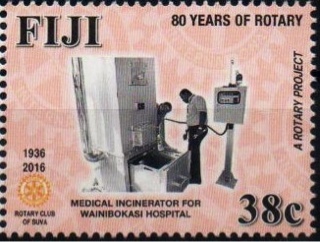 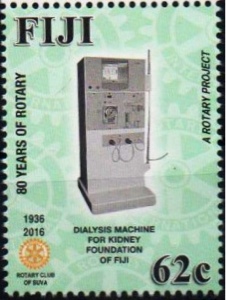 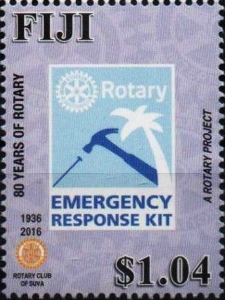 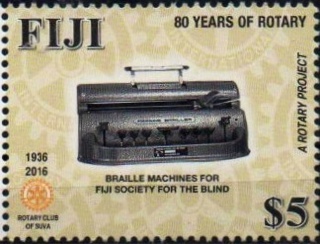 Bogus "stamps":- recently seen on an Internet auction site being offered for sale by a seller in India are 2 sheetlets inscribed "Botswana" each containing 6 different "stamps" - a sheetlet on the subject of "King of Rock and Roll" with pictures of the late US entertainer, Elvis Presley, and "Actress" with illustrations of the late Marilyn Monroe, a US film actress. Both items are imperforate. These items are plainly bogus and illegal and not worth a farthing. 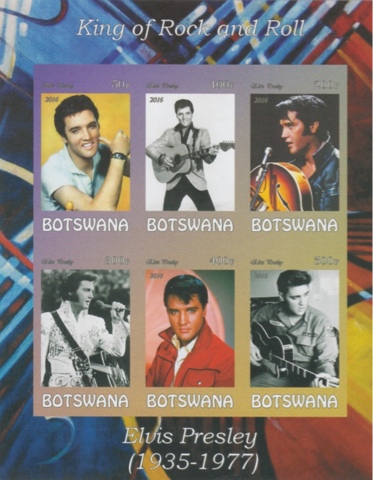 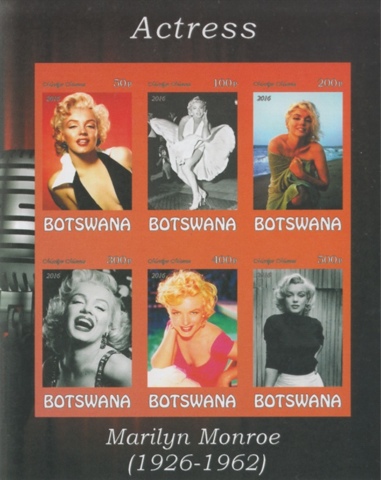