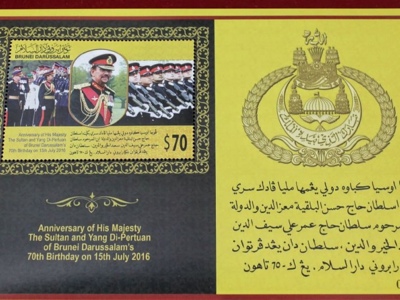 The postal administration of Brunei Darussalam issued 5 vertically se-tenant stamps, a $3.50c booklet, a $3.50 miniature sheet and a $70 (£39) miniature sheet on 15 July 2016 to commemorate the 70th birthday of The Sultan Of Brunei.
An interesting set but the Brunei Darussalam Post Office really is stretching collectors' patience with these excruciatingly expensive miniature sheets which it releases from time to time matching the face value to the number of years of the particular anniversary the sheet commemorates. One dreads a possible future bicentenary commemoration of some important national anniversary when, no doubt, a $200 miniature sheet would make its appearance on the scene.
In the mean time, we can expect a $50 sheet next year when the Sultan celebrates the Golden Jubilee of his succession to the Throne of Brunei. Or, even better - and here's an idea worth thinking about - why not issue 50 different $50 miniature sheets to make sure that the philatelic commemoration of the important anniversary is truly memorable. Just an idea. Rating:- ***. 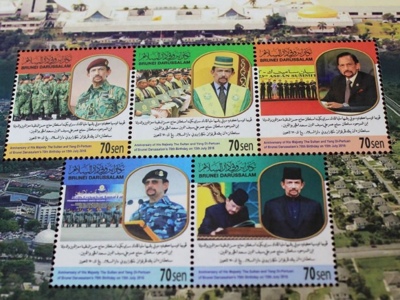 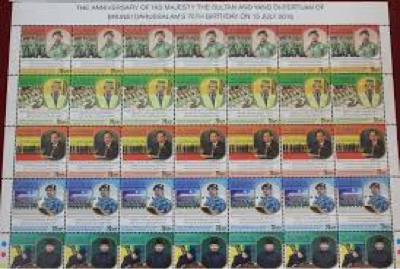 In Blog 784 I mentioned the Jersey Post issue due on to commemorate the Centenary of the First World War and depicting various battles of the war. Since I don't like to write a new Blog without mentioning yet another new item from Jersey Post, on this occasion I include illustrations which depict the six new upcoming stamps. Rating:- *****. 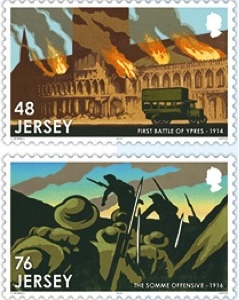 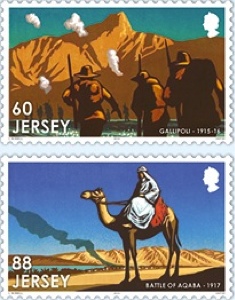 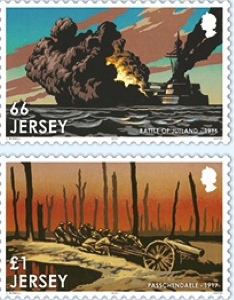 Cyprus Post issued a single stamp on 8 July 2016 on the subject of Euromed and which depictsuu a fish which is the theme of this year's omnibus issue. The stamp is lithographed in sheets of 10 stamps.
On the same date, Cyprus Post also released 2 stamps on the subject of the Fountains of Cyprus. Rating:- ***. 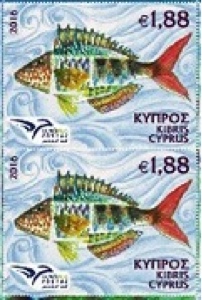 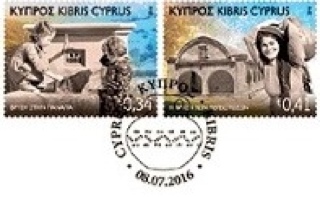