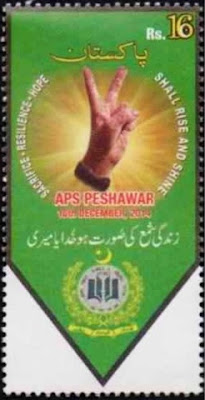 Pakistan Post issued a single stamp on 16 December 2015 which remembers the terrible attack on the Army Public School in Peshawar by the militant Taliban. This single awful deed resulted in the deaths of 141 people, including 132 school children between the ages of 8 and 18, and was carried out by 7 terrorists belonging to Tehrik-I-Taliban. A rescue was launched by the Pakistan Army's Special Services Group which led to the killing of all 7 terrorists and the rescue of 960 people. A further 4 militants involved in the massacre were subsequently executed by hanging.
The stamp was designed by Major Ubaid Nasir and printed in lithography by Pakistan Security Printing Corpoation, Karachi. This is an important and moving issue and highlights the continuing importance of stamps in commemorating people and events of national and international significance and why catchpenny issues put out by exploitative philatelic agencies trivialise such important issues as this latest Pakistan issue. Rating:- *****.
See Blog 601 ("The Age Of Terror").


The relentless outpouring of philatelic products with the name of Commonwealth countries printed on them continues from Stamperija despite the closeness of Christmas. This time Mozambique and Sierra  Leone are honoured to have yet more items produced in their names by Stamperija in limited editions of 1000 which of course makes the products even more desirable than they already were.

The name of Mozambique is printed on 15 "sheetlets", each of 4 different "stamps" along with 15 miniature sheets and the stated date of issue is 15 August 2015. The subjects featured on these products are :- Ludwig van Beethoven, Mushrooms, Mother Theresa, Space mission to Pluto, Motorcycles, Orchids, Pandas, Pope Francis, Shells, Rugby, Sledge dogs, Special vehicles, Tall ships, Marilyn Monroe and "Stamps on stamps". Rating:- 0.
Meanwhile the name of Sierra Leone has been inscribed on 10 "sheetlets", each containing 4 different "stamps" and 10 "miniature sheets" which have a stated date of issue of 23 October 2015. This is the second part of the "French art" series which I mentioned in Blog 678. The subjects in this release are Gustave Caillebotte, Berthe Morisot, Alfred Sisley, Thoeo van Rysselberghe, Paul Gauguin, Henri de Toulouse-Lautrec, Georges Seurat, Pierre Bonnard, Emile Bernard and Paul Sereusier. Rating:- 0.
I do not include any illustrations of the above items as there is nothing in the designs that we have not seen before and it is a complete waste of time reproducing them.
Let us hope that scientists soon come up with a vaccination for the philatelic world against further infection from more of these appalling products. I fear that the philatelic world will be carrying this particular virus around in its blood for some time yet to come.

As mentioned in Blog 675, the New York-based philatelic agents, IGPC, issued a sheetlet of 4 different stamps and 1 miniature sheet on behalf of the Tuvalu postal administration on the subject of (foreign) "Waterfalls". The "Official website of the Tuvalu Philatelic Bureau" now depicts and reveals that the date of issue was "8 September 2015" but then goes on to state that "Not available yet, delay in delivery. Pre-ordering is possible." Presumably then, the stated dated of issue was when the New York agents put the items on sale rather than when they would have been available for sale in Tuvalu since there had been "delay in delivery". What a nonsense it all is.
For anyone with AU$11.10 to spare who feel that they must buy these "stamps" this is what they will be getting for their money (the miniature sheet was illustrated in Blog 675):- 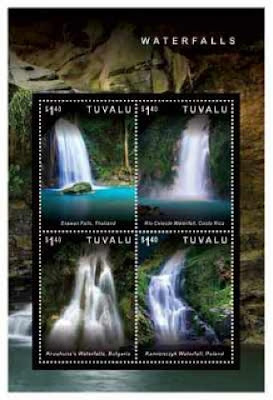 As mentioned in Blog 678, Guernsey Post's Post And Go kiosk situated in Envoy House in St. Peter Port has been dispensing "Guernsey Flag" Collectors' strips of 6 different values during the period 8 to 24 December 2015 with the added inscription "Envoy House Merry Christmas" as depicted below. Rating:- 0. 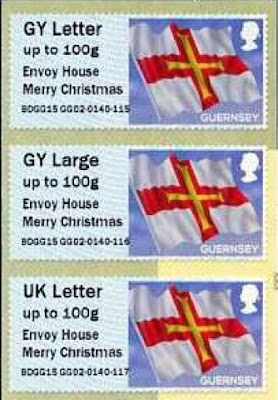 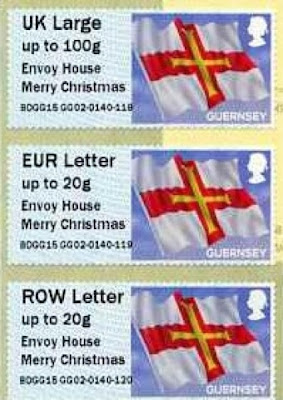