What is the point of a Philatelic Bureau? Not, it seems, to be of any useful benefit to stamp collectors.

Why does a postal administration issue stamps which its philatelic bureau can not be bothered to sell to stamp collectors? Is it expecting too much (apparently it is) that a philatelic bureau might provide a specialist service to its philatelic customers whereby they can obtain stamps (the key word is stamps) from the bureau  which they can not buy themselves from the post office's counters because they don't actually live anywhere near the point of sale?

Hence buyers of stamp-related tat might be able to buy from a philatelic bureau ultra-expensive versions of, for example, stamp booklets sold in metal cases with holograms stuck on their covers or even tea-towels or bags with stamp illustrations on them but the bureau does not provide the collectors with, for instance, varieties of current definitive stamps which collectors view as important because they have a range of annually changing, visually obvious security codes on them.

A new source of complaint about its lack of usefulness to collectors is the Gibraltar philatelic bureau. The Gibraltar postal administration has spent a lot of time this year promoting its "Post And Go" philatelic products which for several months were not even available from a kiosk sited in Gibraltar itself. Then 2 kiosks were finally sited in Gibraltar - at the Main post office and at the Parcels Office. Excellent! - at last, real Post And Go stamps from Gibraltar except that collectors and dealers who did not actually live in Gibraltar, or were perhaps visiting the territory, could not actually obtain any of the real stamps because the Gibraltar philatelic bureau, for whatever reason, was not handling them.

Is it expecting too much for a bureau employee to stand in front of the 2 kiosks and obtain Collectors' strips from them for onward sale to collectors who would like to buy these stamps?

And now, without any publicity of which I am aware - certainly not from the philatelic bureau - it appears that Christmas "Post And Go" stamps (see Blog 656) in 2 designs have been dispensed from the local kiosks since 16 November 2015. It was only by looking at Internet auction sites that I became aware of the existence of these stamps. The designs used for the Post And Go stamps are taken from 2 of the designs of the 2015 Christmas stamp set and, as before, there is a total of 12 different values available from the kiosks which means that there are 24 new Post And Go stamps to obtain deriving from this issue. Still they are quite interesting given that they represent Gibraltar's first special design, apart from the Gibraltar Flag design, to be used on the territory's Post And Go stamps.
If only the Gibraltar philatelic bureau would sell these items there would probably be more sales to be made from them. Here's a little free advice to the manager of the Gibraltar philatelic bureau - get on top of things and despatch one of your employees off to the Main post office and Parcels office and set them to work producing a few of these strips so that you can provide a good service to your (potential) customers and do this with every new Post And Go issue that appears. You might be surprised and not only increase sales income but also make collectors happy. It's all about providing a service.
By the way, Q Post, the Qatari postal service appears to be just as guilty as the Gibraltar postal service in not providing a worthwhile service to its philatelic customers when it comes to "Post And Go" stamps since its philatelic sales office is not offering stamps from its kiosks situated in the main Qatari post office after they were moved there from the previously mentioned philatelic exhibition (see Blog 643). 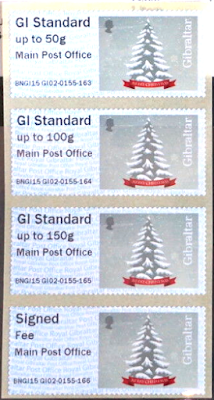 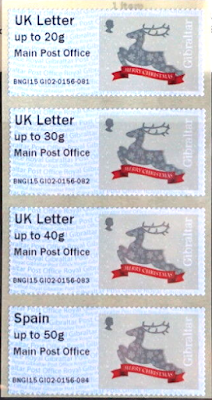 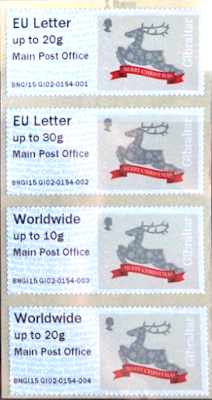 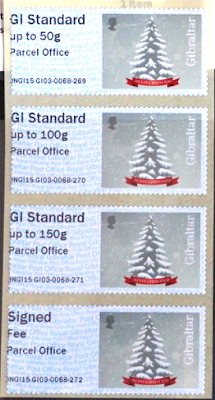 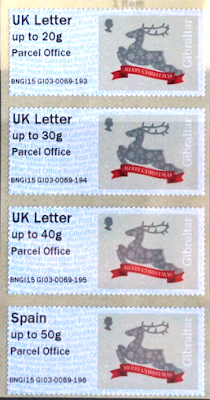 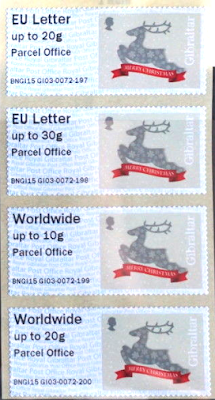