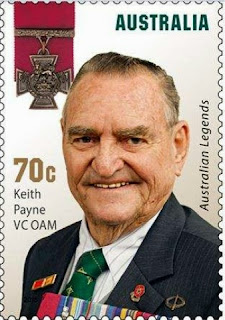 I often moan about the large numbers of stamps issued by Australia Post in recent years but sometimes I have to admit that the postal administration gets things just right. It has been announced that the 2015 "Australian Legends" set due to be issued on 22 January will commemorate Australian recipients of the Victoria Cross. Australian forces have been heavily involved in recent years in Afghanistan and carried out great acts of valour as well as having suffered losses from among their ranks.
The designs feature 5 Australian VC recipients - above is depicted the stamp which shows Keith Payne, Australia's oldest living VC recipient, who received his award for his bravery in rescuing injured soldiers during the Vietnam War in 1969. Mark Donaldson was awarded the VC for drawing Taliban fire away from wounded soldiers in Afghanistan in 2008:- 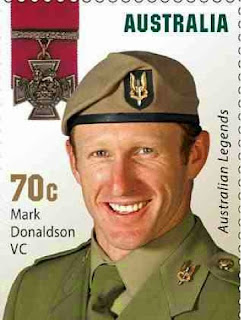 Daniel Keighran received his VC for his actions during a fire fight in Afghanistan in 2010:- 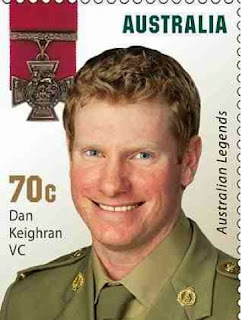 The VC was awarded to Ben Roberts-Smith for his action in drawing enemy fire in Afghanistan in 2010:- 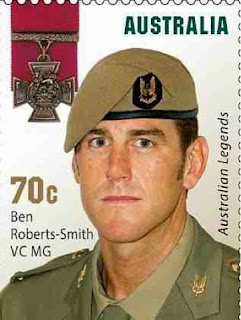 Finally, the VC was awarded to Cameron Baird who was killed in Afghanistan in June 2013:- 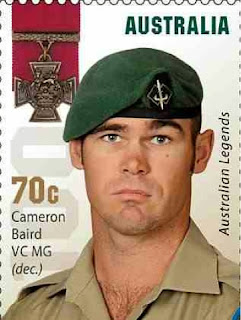 These are excellent stamps and feature brave Australians whom Australia Post rightly recognises as worthy subjects for the honour of being depicted on a postage stamp. So many postal administrations and philatelic agencies devalue the honour given to such worthy subjects when they are commemorated on a national stamp because so many other stamps feature subjects which have no relevance to the country whose name appears on the stamp or, in the pursuit of squeezing money from stamp collectors, feature popular "celebrities" whose significance is ephemeral and whose contribution to the country on whose stamps they appear is transiently newsworthy but ultimately negligible.
The stamps were designed by Lynette Traynor and lithographed by McKellar Renown.
Congratulations to Australia Post for issuing a set of stamps whose designs are clear and understandable unlike the upcoming "Inventive Britons" set from Royal Mail (see below) which commemorates the important achievements of truly notable Britons but in obscure designs which, without the attached text, are incomprehensible in meaning.
Details of the various products being issued in the 2015 Australian legends set are given in Blog 499J. The accompanying miniature sheet includes all 5 stamps and lists the Australian recipients of the Victoria Cross and compliments the miniature sheet (also detailed in Blog 499J) which is also to be released on 22 January 2015 and which commemorates the first award of a Victoria Cross to an Australian during the Boer War. 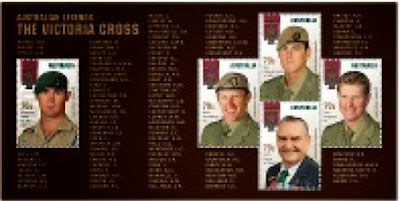 The next special stamp issue from Royal Mail will be released on 19 February 2014 on the subject of "Inventive Britons". One of the designs is said to feature the "World Wide Web", the invention of which is ascribed to Tim Berners-Lee in 1990. The design of the stamp needs some explanation to those of us who have difficulty understanding such things and is remarkably similar to the stamp issued in 2000 to commemorate the new millennium and titled "National Space Centre/Leicester". Since the upcoming stamp does not depict the inventor (it does not even name him) but depicts an interpretation of the invention perhaps the issue is wrongly titled and would be better called "British inventions" rather than "Inventive Britons".

The other inventions to be featured in the set and their inventors are:- 1st:- Colossus, the first electronic computer (Tommy Flowers, 1943) and World Wide Web; 81p:- Cat's Eyes (Percy Shaw, 1933) and Fibre optics (Kao and Hockham, 1960's); £1.28p:- Stainless steel (Harry Brearley, 1913) and Carbon fibre (RAE Farnborough, 1963); £1.47p:- DNA Sequencing (Sanger, 1979) and i-Limb advanced prosthetic limb (Gow/Touch Bionics 2007).
The designs by GBH are interesting but, as mentioned above, obscure so that without reading the text ordinary members of the general public would not have a clue as to what is being commemorated on the stamps. The set was printed in lithography by International Security Printers and the issue will include the first of Royal Mail's prestige booklets to be released in 2015:-


The second part of Cyprus Post's Intellectual personalities definitive series will be issued on 4 February 2015. It consists of a further 12 stamps (2 each of 4c, 50c, 60c, 75c, €1 and €1.50 values). The set was designed by Costas Panayi, Marianna Iacovou, Sofia Malecos and Xenia Christodoulou and printed in lithography by Giesecke and Devrient Matsoukis SA of Greece:- 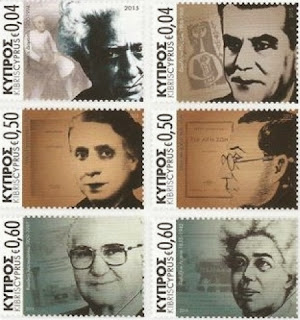 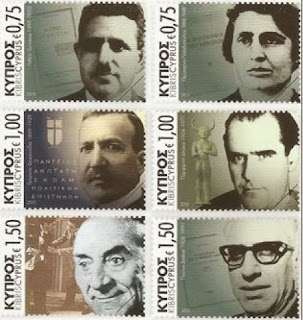