512. Birds From Falkland Islands, World War II From Isle Of Man And Gold From Malaysia. 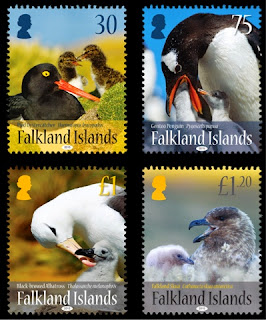 Another lovely set from the Pobjoy Stamps/Creative Direction stable - this time from Falkland Islands - to be issued on 11February 2015 on the subject of Birds And Their Young (depicted above).
In Blog 511 I mentioned the new Isle Of Man Post issue due to be released on 17 February 2015 to commemorate the 175th anniversary of the Penny Black and there is now another issue to mention - 2 miniature sheets which will be released on 26 February 2015 to commemorate the 70th anniversary of Allied victory in the Second World War. The designs of the stamps which are in the VJ Day miniature sheet are taken from original artworks by James Fenton, a resident of Port Erin, which reflect his wartime experiences and depict a Burmese Gurkha and a British soldier, the 2 stamps being joined by a label which depicts the Burma Star medal. The miniature sheets were designed by Isle Of Man Advertising and lithographed by BDT International:- 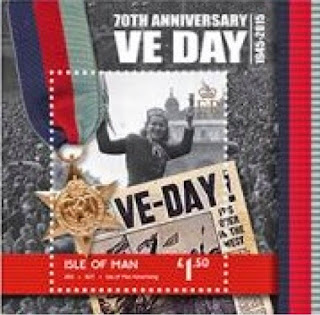 A surprising philatelic item from Pos Malaysia was released on 1 December 2014 which took the form of a postally valid RM50 stamp made from 22k gold plated copper. The design repeats that of one of the Baba and Nyonya heritage stamps of 2013 and was designed by Reign Associates and printed by metal stamping by Cartor. The stamp was issued in a special pack in an edition of 5000:- 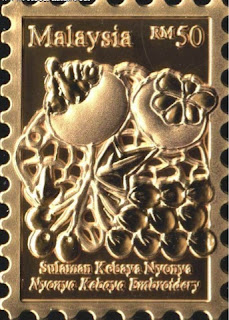 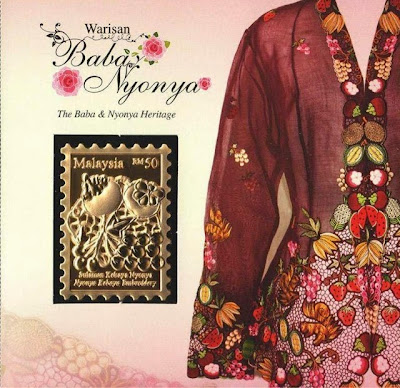 I have previously detailed the Hong Kong Post Lunar New Year issue for 2015 in Blog 479 and simply repeat here the designs of the the basic set of four which will be released on 24 January 2015:-