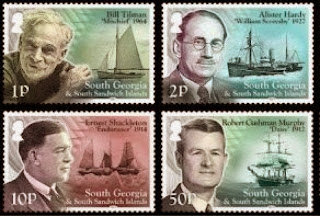 South Georgia And The South Sandwich Islands issued a new definitive set on 5 January 2015. The subject of the 12 stamps is Ships, scientists and explorers associated with the territory. The set was designed by Andrew Robinson and printed in lithography by BDT International:- 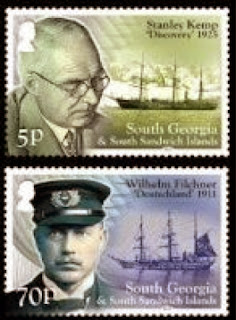 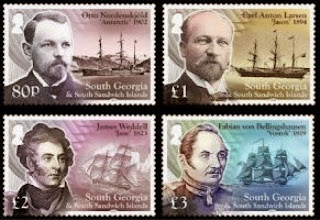 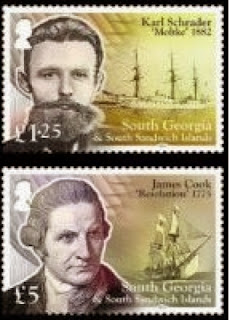 Jersey Post will sell for one month only from 25 January 2015 from its resident JE02 Post and Go machine sited in the Broad Street Post Office in St. Helier strips of the Jersey Flag issue with the added inscription "Churchill 24. 1. 65" to commemorate the 50th anniversary of the death of the former British Prime minister. In an attempt to talk up sales of the item a spokesman for Jersey Post has exhorted collectors to place early orders for the issue before it is sold out since it foresees that the subject of Sir Winston Churchill will be popular among collectors. Well, we'll see.

In Blog 499F I described the issue of a miniature sheet by Isle Of Man on 2 January 2014 which commemorated the Lunar New Year. To underline just how important an event the beginning of the Year of The Sheep is to  Isle Of Man, a sheetlet of 16 identical 10p stamps has also been released. The face value of a single stamp is very modest of course but the price of a complete sheetlet added to the miniature sheet adds up to a grand total of £4.70 which is a lot to pay for items which really have no meaning to a little island in the middle of the Irish Sea:- 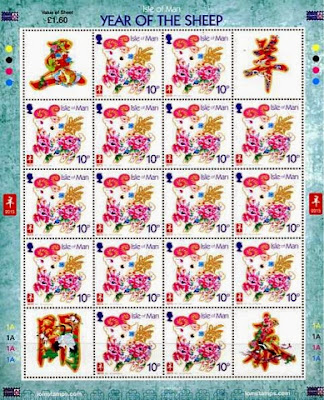 It occurred to me after writing Blog 503 about the portrayal of King John on Commonwealth stamps that I had overlooked several other stamps which portray King John before he succeeded to the throne though I'm not sure that they attempt to present an historically accurate portrait of John. From the early nineteen eighties to the very end of the nineties the prolific USA-based philatelic agency IGPC had the licence to portray numerous characters from Walt Disney cartoon films on the stamps they produced on behalf of a large number of Commonwealth postal administrations and the agency took the opportunity to depict characters from the film "Robin Hood" on a small number of sets. One of the characters which appear in the film is the villainous Prince John and in the movie the character is portrayed as a lion of dubious character. A Christmas set of 9 stamps was issued on behalf of Grenada on 7 December 1982 and the 1c value depicted the feline Prince sitting on his throne with his henchmen, a lupine Sheriff of Nottingham and the snake Sir Hiss, around him:- 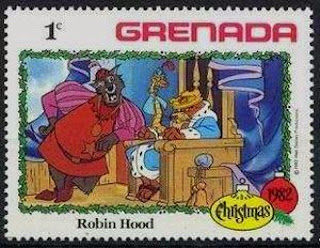 Prince John appeared again on a 50c stamp from a set issued on 16 November 1987 on behalf of Grenada which commemorated the Hafnia'87 Philatelic Exhibition held in Copenhagen which is why Prince John is portrayed stripped to his crown and boxer shorts thus re-enacting a scene from Hans Christan Andersen's "The Emperor's New Clothes"! 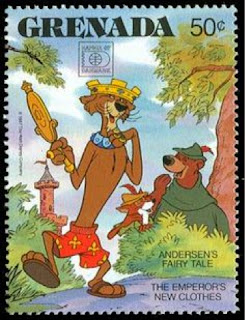 Yet another Disney-themed philatelic item portrays Prince John - this time a miniature sheet produced with the name of Guyana printed on it - the theme being "Disney's Robin Hood Train". The design depicts Prince John and Sir Hiss chasing Robin and Little John who are making their escape on a rail vehicle with a bag of the Prince's treasure in their paws! The issue was said to have been released on 1 March 1999:- 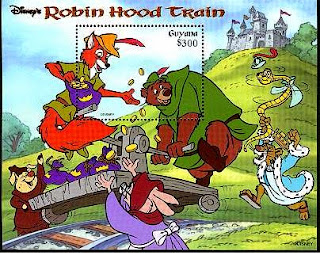 The above three items add nothing to the story of the real King John but are an interesting illustration of the sort of products which have appeared on the philatelic market in the last 30 years or so in the continuing efforts of philatelic agents and postal administrations to persuade stamp collectors to part with their money.

Following on from Blog 500 ("Stamps....The End), I have been fascinated by statistics released by the Universal Postal Union which I discovered being quoted on the Zimpost website. The statistics detail what happened to world-wide mail services during 2013.
Global parcel traffic volumes increased from 2012 to 2013 by 3.7% (a total of 6.7 billion items were carried) with rises in all areas apart from Africa and Asia-Pacific where a slight decline occurred. On the other hand, global letter post traffic declined from 2012 to 2013 by 2.9% to 339.8 billion articles (336.3 billion items consisted of domestic mail and 3.5 billion were international in nature). Imagine if all of these items of mail had had postage stamps attached to them - 336.3 billion commercial covers being produced in a single 12 month period all with postage stamps on them. Such numbers would certainly have justified all the new stamp issues produced during 2013. Unfortunately, as my own experience detailed in Blog 500 shows, very few of these covers were likely to have stamps attached.
Letter post accounted for 43.4% of global public postal revenues, actually up 3% on the previous year, and in industrialised countries, this figure actually reached 59.6% of revenues. Presumably, despite a fall in letter post volume, revenues increased because postal administrations greatly increased their postal rates to compensate as well as reducing some services and increasing postal mechanisation  to improve efficiency.
Worldwide, there was activity at 663200 post offices with a total staff of 5.4million people serving postal customers. 448382 (70%) of establishments were staffed by postal officials while the remainder of staff were not direct employees of the postal administrations.
In 2013, the average number of letter post items posted annually per capita was 289.2 for inhabitants of industrialised countries, 33.9 for inhabitants of Eastern Europe and members of The Commonwealth Of Independent States, 18.9 for Latin America and The Caribbean, 10.2 for the Asia-Pacific area and just 2 for Arab countries and Sub-Saharan Africa.
89% of the world's population received mail home-delivery services (96% in industrialised countries). In Africa only 43% received home mail delivery. 3% of the world's population had no mail service but this rose to 13% in Africa and 8% in Arab countries.
This information was obtained from 150 of the 192 members of the UPU.