I illustrate at last the stamps which were issued on 9 October 2014 by Seychelles and Mauritius and which feature the same design - a green turtle (see Blog 480):- 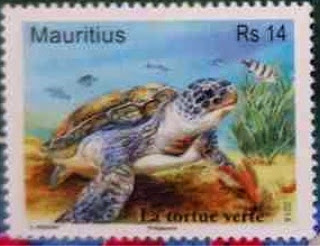 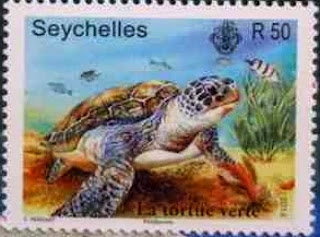 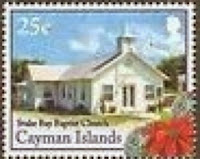 Illustrated on the Internet are depictions of the Royal Mail's first set of 2015 - 10 stamps and 1 mixed retail booklet to commemorate the 150th anniversary of the publication of Lewis Carroll's exceedingly weird Alice's Adventures In Wonderland.
As a child I never liked this book which I found to be very sinister and not funny in any way and my view of it has not improved with age. Nevertheless Royal Mail has produced an excellent set of stamps, each depicting a different scene from the novel and one or two of the designs convey the unpleasantness of some of the characters in the book, especially the horrendous Queen Of Hearts who constantly orders the beheading of the novel's other characters which is not something to be dwelled on. 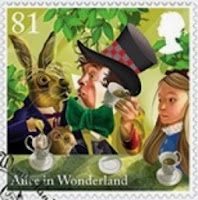 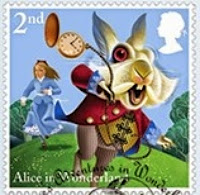 Among the designs is a depiction of the permanently grinning Cheshire Cat, another extremely sinister concept, even more so since its fate in the novel is to gradually fade away until nothing is left of it but its grin which remains hovering in the air when all else has disappeared. Unnervingly this feline has been depicted on 2 previous British stamp issues and the version which is to appear in the 2015 set is the least sinister of the three. One monstrous version of the Cheshire Cat appeared on one of the ten Greetings stamps which were issued as a se-tenant pane in a loose booklet on 6 February 1990. The value of all the stamps in the booklet was expresssed as "20p". The stamps were released again in a booklet se-tenant pane on 26 March 1991 but with the value expressed as "1st". The stamps were once more printed in photogravure by Harrison.
Subsequently, on 22 May 2000, the designs were reissued as the first Smilers stamps in a sheetlet with attached labels as part of the issues which coincided with The Stamp Show 2000 philatelic exhibition held in London. The set, including the Cheshire Cat, was designed by Michael Peters And Partners and printed in photogravure by Harrison but the 2000 reprints were printed in photogravure by House Of Questa.
A new version of the Smilers sheet, including the Cheshire Cat stamp, was issued on 3 July 2001 but this time printed in lithography by Questa.
A set of 4 stamps, designed by F. Hughes, was issued on 11 July 1979 to commemorate the International Year Of The Child and scenes from 4 children's books made up the designs of the set. While other stamps depicted the reassuring presence of Winnie The Pooh and Peter Rabbit, the 13p showed Alice and The Mad Hatter with the Cheshire Cat looking down at them as though it is thinking of gobbling them up (illustrated below):- 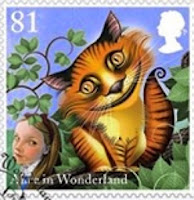 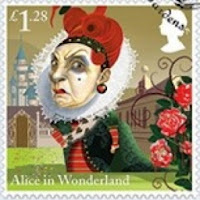 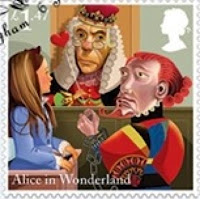 The self-adhesive  retail booklet features the 2 first class mail designs with Alice holding the bottle that says "Drink me" and the other depicting the results of following the instructions as an enlarged Alice has problems with the furniture. The 4 Machin vermillion 1st class definitives stamps which also appear in the book will be the first of the year to include the M15L MCIL date code and so the booklet will produce 3 new stamps in addition to the 10 gummed Alice stamps from ordinary sheets:- 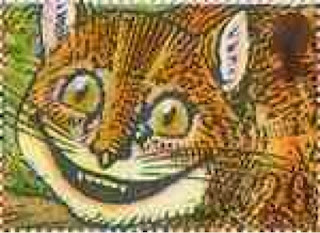 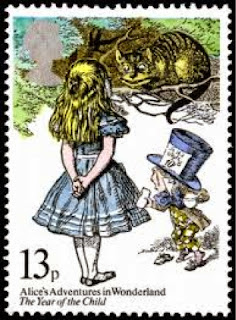 Two further characters from the Alice stories appeared on 1 of the 10 Greetings stamps which Royal Mail issued on 2 February 1993 - this time it was the rather unpleasant-looking twins, Tweedledum and Tweedledee. the stamps were again sold in booklets of 10 different designs and were designed by Newell And Sorrelll and photogravure printed by Harrison. Newell And Sorrell also designed the ten Greetings booklet stamps which were issued on 1 February 1994 and managed to include one stamp in the set which depicted Alice herself. We were spared any more Alice In Wonderland stamps when Newell And Sorell designed the 1995 Greetings set and the last Greetings set was released in 1996 and was again an Alice Free Zone.
Royal Mail however still had one Alice stamp up its sleeve. It released a set of 5 stamps titled "Magical Worlds" on 21 July 1998 which depicted Alice and The Red Queen running as fast as they could to stay on the spot. The set was designed by Peter Malone.

I almost forgot - there was yet another British Alice in Wonderland stamp which was released on 10 January 2006 and that depicted the White Rabbit as part of a set of 10 "Children's Favourite Book Animals". The set was designed by Rose Design and lithographed by De La Rue:-

This means that prior to the 2015 issue, Alice In Wonderland enthusiasts have 4 different versions of the 1990 Cheshire Cat design to track down plus 5 other Alice-related British stamps so that in all there will be 21 British stamps when the 2015 issue is placed on sale. This means that Alice In Wonderland has appeared on more British stamps than Harry Potter, the plays of Shakespeare and the novels of Jane Austin, Charles Dickens, JRR Tolkein, Agatha Christie and Ian Fleming.
In the past, one or two other Commonwealth countries have issued stamps depicting the adventures of Alice but more as a way of cashing in on images taken from the Walt Disney cartoon movie version of the story rather than to honour the Rev. Dodgson or his literary achievement. Thus, The Maldive Islands was provided with a set of 9 stamps and 1 miniature sheets which was issued on 22 December 1980:- 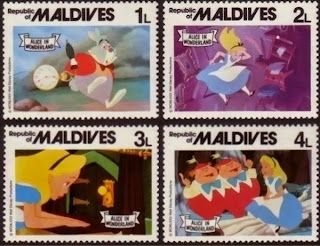 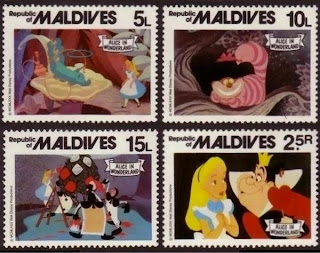 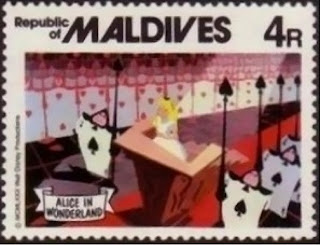 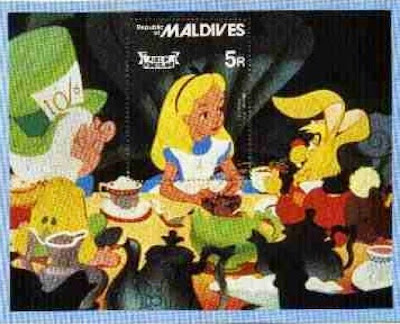 A set was also issued by Grenada with a date of issue of 9 September 1987. This enormous set of 54 stamps (issued as 6 sheetlets each of 9 different stamps) and 6 accompanying miniature sheets commemorated the 50th anniversary of the first full-length Disney cartoon and one of the sheetlets and 1 miniature sheet featured scenes from Disney's Alice In Wonderland (the other featured movies were Peter Pan, Snow White And The Seven Dwarves, Sleeping Beauty, Pinocchio and Cinderella).

Of course it is impossible to think of any link between Maldives and Grenada and the subject of Alice In Wonderland unless one suspects that one of the many stamps depicting turtles which both countries have issued in the past actually depicted a mock turtle with whom Alice had an encounter during her Wonderland excursions, and I never added, nor want to add, either of the above issues to my collection but the 2015 Royal Mail issue does look very well designed and interesting and I will be pleased to add it to my Great Britain stamp album.