498. Pay And Post Labels/Stamps Of The Isle Of Man.

In Britain, a lot of attention has been given to Faststamps, more popularly known as Post And Go stamps, since the various machines which dispense them began to appear at philatelic exhibitions, museums and in real post offices, the first having been installed at Bristol Post Office in October 2008. Royal Mail, and more latterly, Jersey Post, have flooded numerous variations of these stamps on to the philatelic market so that in a relatively short time enthusiasts for collecting them have become worn down by the deluge of issues.
However I am thoroughly annoyed with myself because I find I have overlooked up to now another notable development in the postal history of the British offshore islands - machines placed in the main post office in Regent Street in Douglas, Isle Of Man as well as other situations such as privately-owned supermarkets, which are called Pay And Post kiosks. The kiosks are multi-functional and as well as the customer being able to weigh an item of mail and pay for an appropriate bespoke postage label/stamp  (this role is similar to Royal Mail's Post And Go kiosks) various other functions may be carried out including the payment of some types of bill and even fines and parking penalties.
The first Pay And Post kiosk was installed in the Regent Street Post Office in 2010 and kiosks are now situated at the Ferry Terminal in Douglas, Douglas Sorting Office, Wessex Garage in Douglas, Shoprite supermarkets in Douglas, Port Erin, Peel and Ramsey and in the Station garage in Castletown. A kiosk was also installed at the Crosby Hotel in March 2013 after the village's sub-postmaster had retired in 2010 and no suitable replacement could be found. 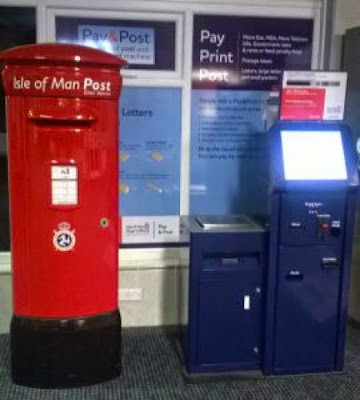 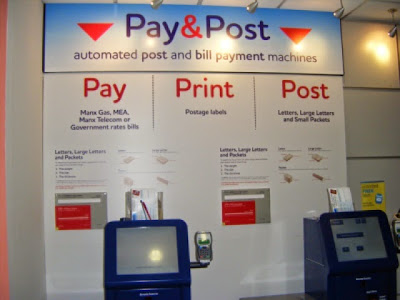 I am annoyed with my ignorance about these kiosks because I visited The Isle of Man about a month ago and was in both the Regent St. Post Office and Ferry Terminal but did not notice either of the machines and therefore missed the opportunity to send some mail with the Pay And Post labels/stamps attached to it. I can not find any depiction of the labels/stamps on the Internet and so I currently do not know what the items produced by the machine actually look like. However I am keen to try to obtain examples of these stamps since they clearly fulfill the role of indicating the prepayment of postage which is broadly what I accept as the definition of a postage stamp so the omission of examples of them from my Isle Of Man collection means that some significant items in the story of Manx stamps are missing from my collection. I hope to persuade some friends who live on the island to take a trip to Regent Street, or perhaps the local supermarket, to obtain some examples for me.
I have received mail from the island in the past with machine produced labels affixed to it and I presume these labels were counter-printed and similar to the Horizon labels which are affixed to mail at the counters of post offices in The United Kingdom. Both of the examples depicted below were produced at the Regent Street post office - the first is dated 16/03/2010 with the postage being £2.09 and the second item is the detail of a cover with the label/stamp dated 02/04/2005, the postage being £0.93. The postmark ironically bears the slogan "COLLECT ISLE OF MAN STAMPS" which I presume was a promotion of Manx commemoratives, something on which the use of these counter-printed stamps had the exactly opposite effect:- 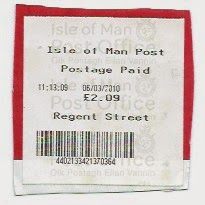 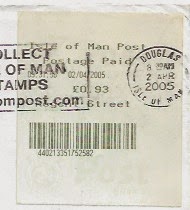 Again I feel these counter-printed stamps, like the Horizon labels, represent a significant development in the postal history of the island and a collection of Isle Of Man stamps should include examples of these items.
Addendum - see Blog 517 for illustration of Pay And Go stamps.
Royal Mail's latest "Post And Go" stamps were issued on 13 November 2014 and unusually consisted of only 4 designs rather than the usual six. I have added to my collection the set in a pack sold by the Philatelic Bureau in Edinburgh and a "Collectors' Set" with inscription printed by an NCR kiosk. The "Collectors' Set" is comprised of 3 of each 1st Class design, each in a different value, and 2 x 2nd class designs as depicted below:-


During the past year the New York-based philatelic agency, IGPC, has been busy releasing numerous stamps on the subject of art in the name of its various client territories. Now another prolific philatelic agency, Stamperija, has struck back with products with the name of Mozambique printed on them - 15 sheetlets each of 4 different "stamps" and 15 miniature sheets all on the subject of the history of art.

It must be that paintings are a popular theme at present because there are a huge number of such stamps currently flooding on to the philatelic market. I presume that these agencies would not produce them if they thought that they would be hard to sell.
For the record, the subjects of the sub-issues are:- Prehistoric art, the art of ancient Egypt, the art of ancient Greece, Roman art, Byzantine art, African art, Baroque and Rococo art, Realism, Impressionism, Post-Impressionism, Surrealism, Indian art, the art of ancient China, Japanese art and Renaissance art. These items are said to have been "issued" on 30 June 2014. Apparently they have been printed on "foil".
The extraordinary face value of this set is MZN3404.00 which, at current conversion rates, is £70.50p. For Stamperija it's like having a licence not just to produce stamps but to print their own money. 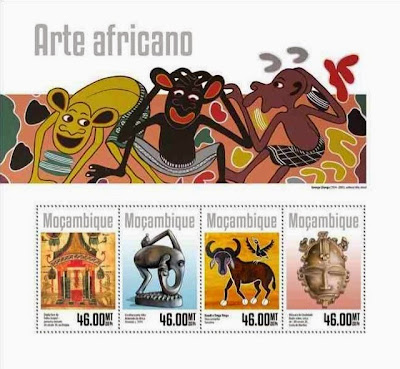 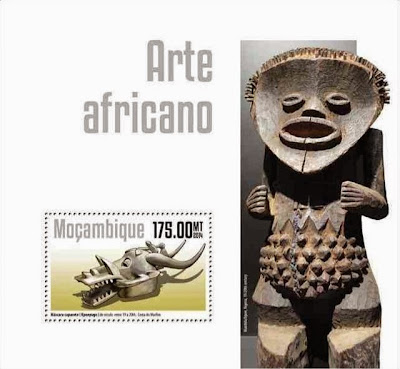 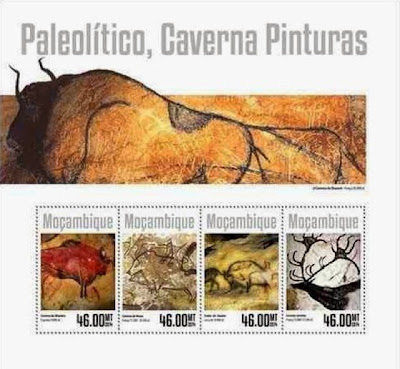 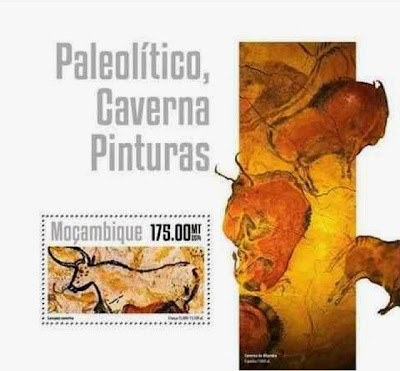