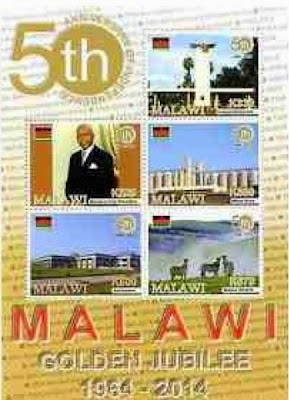 Malawi issued a set of 5 stamps, 1 miniature sheet which combines all 5 values and a booklet on 5 July 2014 to commemorate the 50th anniversary of the country's achievement of Independence. The central design of the set depicts Dr. Hastings Kamazu Banda, Malawi's first President and founding father:- 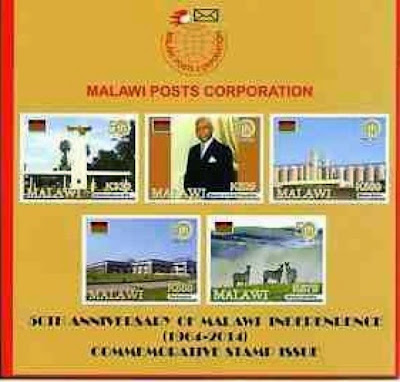 We must also expect commemorative stamps from Zambia which celebrated the 50th anniversary of its Independence on 24 October 2014 but I have not seen details of any such issue yet. Malta celebrated the 50th anniversary of its independence on 21 September 2014 and released 1 miniature sheet on 15 May 2014 (see Blog 410). Grenada celebrated its 40th anniversary of independence on 7 February 2014 and 4 stamps and 1 miniature sheet were issued which depicted the country's first prime minister, Eric Gairey (see Blogs 366 and 397). Brunei Darussalam achieved the 30th anniversary of its Independence on 1 January 2014 and its 30th National Day was commemorated on 23 February 2014 with the release of 4 stamps, 1 miniature sheet and 1 booklet (see Blog 387).
The Gambia will celebrate its 50th anniversary of Independence on 18 February 2015 but left The Commonwealth in 2013 (see Blog 310) so even if its foreign philatelic agents produce stamps to commemorate the country's important anniversary (though that particular agency is far more likely to produce Gambian stamps which depict Elvis Presley and Marilyn Monroe) I shall not need to add any such stamps to my Commonwealth collection.
Full marks to Gibraltar for its Christmas set of 5 stamps and 1 accompanying miniature sheet which will be issued on 3 November 2014. The designs are extracted from a collage constructed by 33 artists at the St. Bernadette Resource Centre in Gibraltar and celebrate International Day Of People With Disability which takes place on 3 December. The stamps were designed by Stephen Perera and lithographed by Cartor. These are colourful, attractive and festive stamps of important local relevance - if only other philatelic entities could copy this effort:- 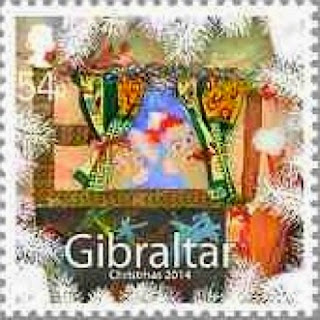 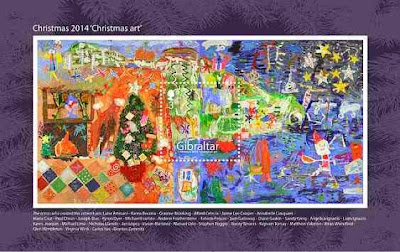 In the last few weeks Jersey Post has been particularly greedy in trying to extract money from stamp collectors by releasing large numbers of new stamps and beyond a shadow of a doubt the amount of material that it is unloading on the new issue market must be considered to be grossly excessive (see Blog 484). I have collected the island's postage stamps since postal independence was granted in 1969 but now feel I must draw a line under my collection and stop buying most items that are released. I feel sad about this since many Jersey stamps continue to be very attractive and often interesting and I have collected the island's stamps for a long time but the amount of items produced and the total face value make continuing to form a collection of all Jersey stamps an unappealing activity.
I shall continue to collect some of Jersey's stamps but only when they are released to commemorate a locally notable and significant anniversary or event. By following this plan and choosing not to buy the last 4 issues of 2014, including 1 prestige booklet, I shall be saving the remarkable sum of £41.46  between October and November 2014 alone. I hope those who are responsible for Jersey's new issue programme will eventually come to their senses and return to a more sensible new issue policy. I have already started to follow this plan with the issues of Australia Post and I do not feel that my collection of Australian stamps is any the poorer for having done so.
There are a number of booklets which have recently been issued by Commonwealth postal administrations. In Blog 487 I mentioned the set and miniature sheet which was issued by Brunei Darussalam on 9 October 2014 to commemorate the centenary of formal teaching in the country and those items were accompanied by a booklet containing a strip of the 4 stamps which was also issued on 9 October 2014. In Blog 488 I also mentioned a Malawi booklet which has been issued (although I can not yet give any details of it) which contains definitive stamps.
It appears that the Cayman Islands Commonwealth Games set (see Blog 483) has also been accompanied by a $2.50 booklet of 10 x 25c self-adhesive stamps which feature a smaller version of the design which depicts a swimmer:-