498A. Jersey's JE01 Post And Go Kiosk Finally Makes An Appearance In Jersey. 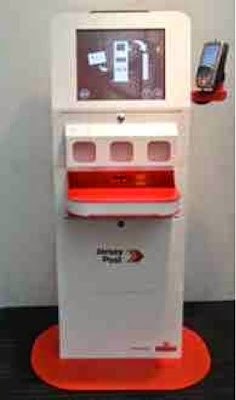 Jersey Post's peripatetic JE01 Post And Go kiosk has led an exciting life for one so young - since it made its debut appearance at the Spring Stampex philatelic exhibition in London in February 2014, it has popped up at various other venues - the 85th Scottish Congress in Perth from 11 to 12 April 2014,  Philakorea stamp exhibition in Seoul in South Korea from 7 to 12 August 2014 and then back to London for Autumn Stampex in September 2014 and in all those places it has been busy churning out Post And Go labels in countries where they were not valid for postal usage. The fact that the items had no postal validity in the countries where they were produced gave me an excuse not to spend my money on them and allowed me to call them exhibition souvenirs rather than postage stamps.
But now JE01 has gone home for Christmas. Jersey Post transported the machine to Jersey itself and sited it at the Jersey's Lifestyle Exhibition which was held from 7 to 9 November 2014. The kiosk dispensed two designs - the Jersey flag design and the Royal Mail Post And Go Union Jack design (the latter of course would have no postal validity in Jersey). The show was not a philatelic exhibition but a platform for exhibitors to highlight home and lifestyle products to the Jersey general public and so one could say that these Post And Go labels were genuinely available to the general public even if they were on sale for a very limited time period (3 days).
The stamps did not have special inscriptions applied to them for the show but are identifiable as being sold there by the identification numbers unique to the machine and a session number which identifies where and when they were issued. The stamps were only available at the exhibition. As far as I can see, these are the first true postage stamps dispensed by JE01 but also those which are likely to be the rarest produced by the machine since the number of philatelists at the exhibition is likely to be small. At the time of writing, I have not seen any of these particular items offered for sale on E Bay or elsewhere. I believe the machine is to make another appearance at another venue on its home soil before Christmas but this second venue has not yet been revealed. After that, JE01 will be off on its travels again - back to London for Spring Stampex 2015.
Post scriptum. Strips of both the Jersey Flag and Royal Mail Union Jack stamps have now been put on sale by a dealer on the E Bay auction site (19-11-14).