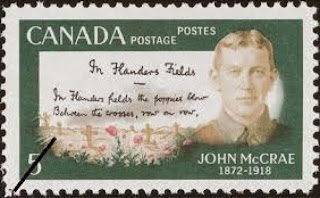 In Flanders fields the poppies bent
Between the crosses, row on row
That mark our place; and in the sky
The larks still bravely singing, fly
Scarce heard amidst the guns below...

The 11th hour of the 11th day of the 11th month, 1918. Armistice Day- the day the First World War ended.
A large number of stamps have been issued during 2014 to commemorate the centenary of the beginning of the First World War and those from Commonwealth countries have been featured in various Blogs in the past few months. Many of those stamp issues had a recurring motif incorporated in their various designs - poppies - indeed 2 stamps from Jersey have even had real poppy seeds incorporated in them! It is interesting to look back on a couple of older stamp issues which recall the First World War and the place of poppies as a symbol of honouring those who were lost in The Great War and in Remembrance of them.
A stamp of Canada which was issued on 16 October 1968 commemorated the 50th anniversary of the death of Lt. Col John McCrea who wrote the poem In Flanders Fields. McCrae was a physician and poet from Guelph in Ontario who, at the age of 41, enrolled with the Canadian Expeditionary Force at the outbreak of the First World War. Instead of joining the Medical Corps he chose to join a fighting unit as a gunner and medical officer. He had previously seen military action having served in the Second Boer War. McCrae believed in serving his country and the Empire. He fought in the second Battle of Yrpes during which the Germans attacked the Canadians with chlorine gas on 22 April 1915. Despite this the Canadian line held for 2 weeks and McCrae wrote of the "nightmare" experience of the battle in a letter to home. His close friend, Alexis Helmer, was killed on 2 May 1915 and McCrae supervised his burial and afterwards noted how poppies grew quickly around the graves of those who died. The following day he wrote the poem "In Flanders Fields" whilst sitting in the back of an ambulance.
McCrae himself never saw the end of the war. He was promoted to the rank of Lt. Colonel but in early 1918 contracted pneumonia and meningitis and died on 8 January 1918 at the military hospital in Wimereux. His poem has become an important part of Remembrance Day ceremonies in Canada and an iconic piece of Canadian poetry.
Another Canadian issue which is of relevance to the subject is that which was released on 19 October 2009 titled "Lest We Forget". The single stamp and miniature sheet depict a detail of the Canadian National War Memorial in Ottawa. Poppies once more feature prominently in the stamp design as shown below:- 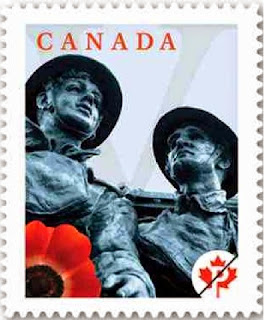 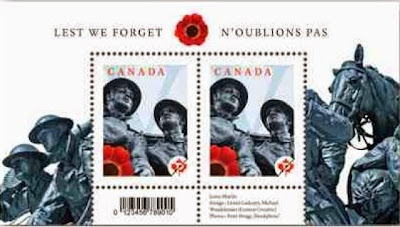 In 1917 Newfoundland became a Dominion of The British Empire, a status which it retained until 1934 when its constitution was suspended by its own request because of severe financial problems and it fell under direct British rule until 1949 when it became part of Canada. The Dominion issued a set of 12 stamps on 2 January 1919 to commemorate the role of the Newfoundland contingent of the imperial forces. The design featured the head of a caribou and the inscription "Trail of the Caribou" and each value featured the name of a different military action in which Newfoundland forces had participated. The 2c, 5c, 8c and 12c values were inscribed "Royal Naval Reserve, Ubique" in place of "The Trail of the Caribou". The military actions mentioned on the stamps were Suvla Bay (1c), Gueudecourt (3c), Beaumont Hamel (4c), Monchy (6c), Steenbeck (10c), Langemark (15c), Cambrai (24c) and Combles (36c). 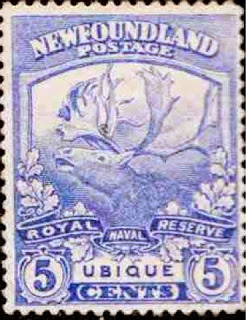 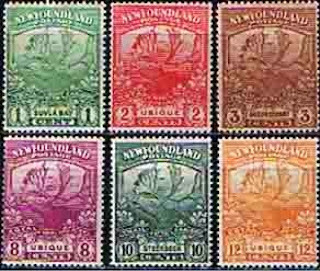 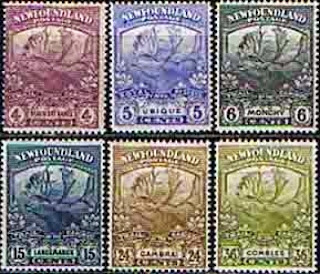 Subsequently, Newfoundland depicted the statue of "The Fighting Newfoundlander" on the 3c value of a definitive set which was issued on 9 July 1923:- 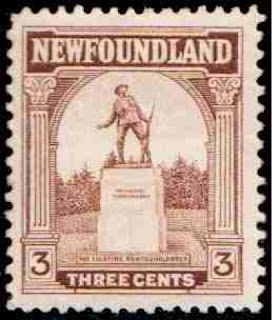 The war memorial in St. John's was depicted on the 10c value of the Newfoundland "Publicity" issue which was released on 3 January 1928:- 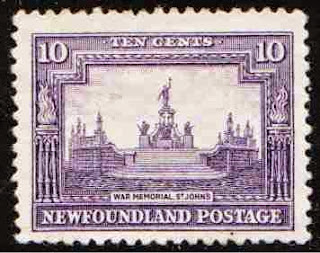 These stamps from Canada and Newfoundland are honourable commemoratives of the sacrifices of the people who fought in the First World War for King, Country and Empire dating back to as long ago as the year after the end of the war. Recent Blogs have also highlighted other excellent, more recent philatelic commemorations of the events of the First World War and, sadly, some less worthy stamps on the subject, usually produced by exploitative philatelic agencies, have also been mentioned. Doubtless we will see many more First World War-themed stamps appearing on the philatelic market over the next 4 years leading up to Armistice Day 2018 - I hope they respect those who sacrificed themselves in the war rather than exploiting the subject just to add to the financial profits of one or two greedy philatelic agents.
Turning to new Commonwealth stamp issues which are on the subject of the centenary of the First World War, among the latest issues announced by a large New York philatelic agency are:-
Ghana - 19 March 2014 - 1 sheetlet of 4 different stamps and 1 miniature sheet of 2 different stamps. The depiction of tanks seems to have little to do with the involvement of the people of The Gold Coast in the conflict. These items are additional to another sheetlet of 4 different stamps and 1 miniature sheet which depicted foreign rulers of the major powers during the First Wold War - again, a subject of no direct relevance to Ghana (see Blog 464):- 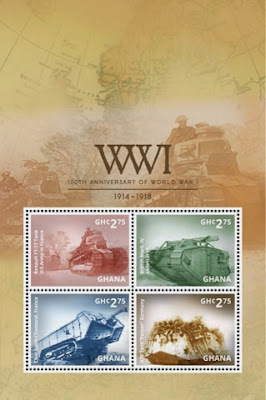 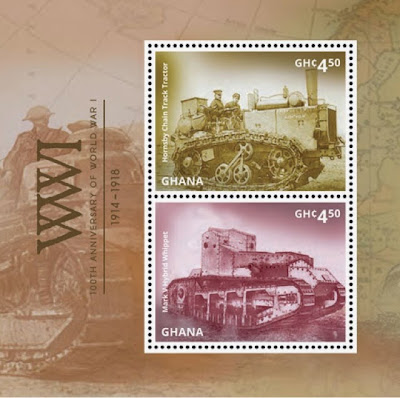 St. Kitts - 4 September 2014 - 1 sheetlet of 4 different stamps and 1 miniature sheet containing 2 stamps. Again, the designs have no relevance to the role of the people of St. Kitts in the Great War and make no attempt to honour the sacrifice of the people of that little country. Instead the designs seem to concentrate on the role of the United States President Wilson though The United States did not enter the war until 1917 so any First World War centenary-related stamps which deal with the role of the USA in the war are 3 years too early! These items are additional to the sheetlet of 4 stamps and 1 miniature sheet which featured tanks (see Blog 487):- 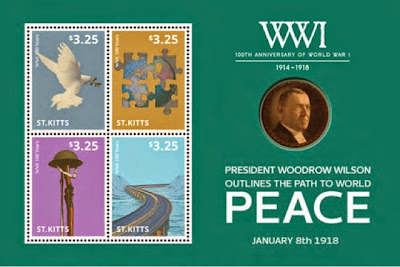 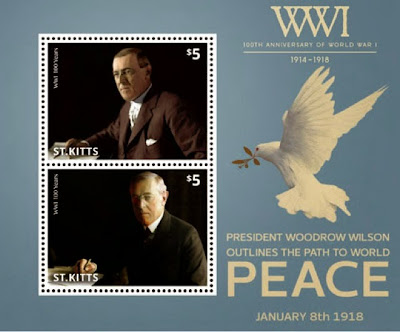 Finally, leaving the First World War, the next issues from Cyprus will be:- 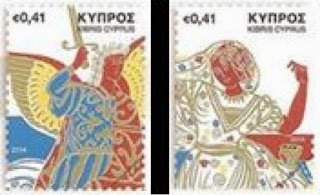 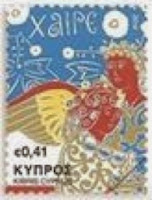 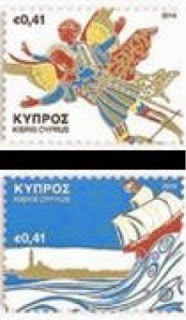