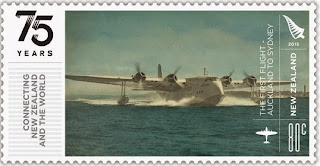 New Zealand Post's first issue of 2015 will be released on 14 January when 5 stamps and 1 miniature sheet will commemorate the 75th anniversary of the New Zealand national airline. The airline began as Tasman Empire Airways Ltd. (TEAL) and was then known as National Airways Corporation (NAC) before becoming the Air New Zealand of present times. The issue was designed by Insight Creative and printed in lithography by Southern Colour Print:- 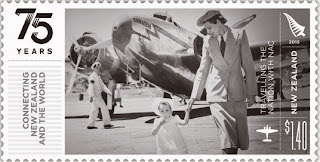 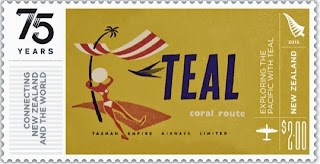 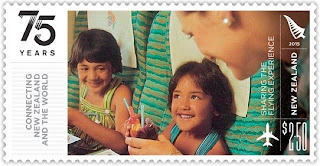 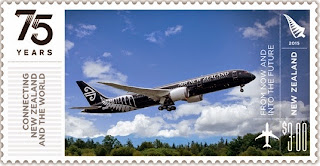 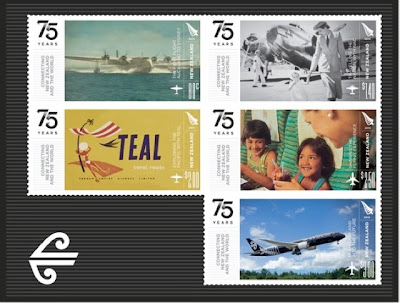 Also to be issued on 14 January 2015 is a set of 4 stamps and an accompanying miniature sheet to commemorate the lunar new year which will be the Year of the Sheep (a fitting subject for New Zealand). The issue was designed by Asiaworks and lithographed by Southern Colour Print:- 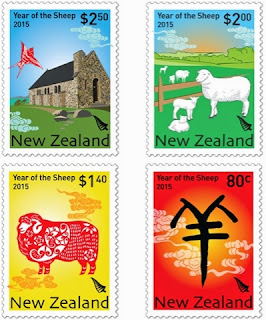 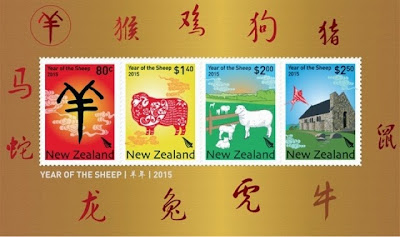 Just when you thought Jersey Post must have issued as many stamps as possible during 2014 another set comes along - cheap to produce but not so cheap to buy. With Post And Go machine JE01 paying  its first ever visit to Jersey itself (see Blog 489A), it has now been located in the foyer of the Headquarters of Jersey Post in Rue Des Pres where it will reside from 1st December to 1st January 2015. There, it will happily churn out collectors' strips of 6 values of the Jersey Flag Post And Go stamps for the entire month with the added inscription "Merry Christmas", as will the JE02 machine in the Regent Street Post Office, enabling the collector to rid himself of the sum of £4.07 per strip. Thus Jersey has now issued 122 stamps and 9 miniature sheets and 1 prestige booklet during 2014 and seems to have needed to issue 14 Christmas stamps.

It is planned to issue the island's first "Post And Go" stamps of 2015 on 24 January as another set of "overprints" from the JE02 machine which will have a limited sales period of 1 month only. 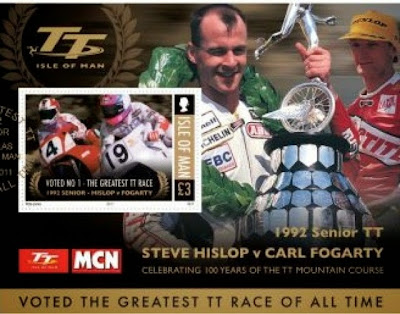 Isle Of Man Stamps And Coins are selling currently a special cover which commemorates the "Voted No. 1 Greatest TT Race of All Time" between Steve Hislop and Carl Foggarty which took place in 1992. The IOM Stamps And Coins website variably says that the cover is limited to an edition of 400 or 500 covers and is autographed by Carl Foggarty and cancelled by a gold foil postmark. The cover includes the miniature sheet issued on 1 April 2011 containing a £3 stamp on the subject of this notable motorcycle race and the entire "product" now sells for £20 (or £25.99 if you buy it from a dealer currently advertising the item on E Bay).
There's a lesson here for all postal administrations and philatelic agencies - do not get rid of your old unsold stamps but wait a few years and then sell them on a "limited edition" cover - even if stamp collectors will not buy them they're bound to sell like hot cakes to members of the public who lack philatelic knowledge - and why not? - these items provide motor cycle enthusiasts with an interesting souvenir and we've all got to spend our money on something, haven't we? After all - one may as well spend it on something that gives a little pleasure to oneself! 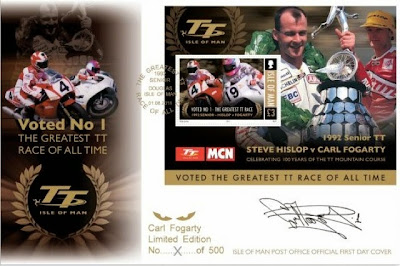 It isn't easy to understand why Grenada's foreign philatelic agents would think it appropriate to produce a set of stamps on the island's behalf which depict a lion and a snow leopard but the relevance of a stamp issue's subject matter to the country whose name appears on the stamp has long ceased to matter. So a set of 4 stamps and 1 miniature sheet has indeed been released for Grenada on the subject of "Big Cats" none of which, of course, are found in the island. I do not yet know the stated day of issue:- 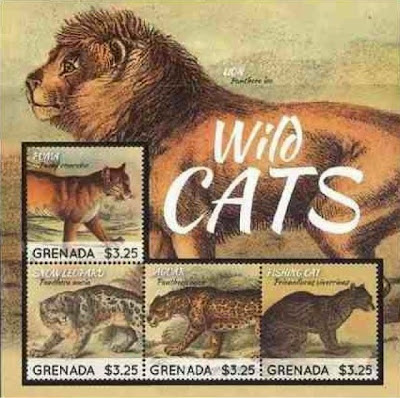 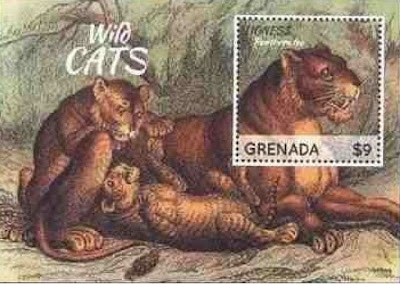 As pointed out previously in Blogs 495 and 499A, despite the ongoing Ebola crisis in Sierra Leone, the country's foreign philatelic agents continue to place stamps on the philatelic market with the country's name printed on them. Remarkably the subject of the latest issue could not have less relevance to Sierra Leone - Chinese New Year - the issue is comprised of 2 sheetlets - 1 of 2 x 2 different stamps and the other of 6 x 1 design.:- 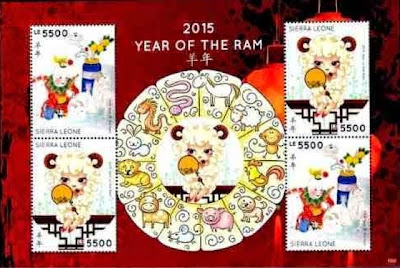 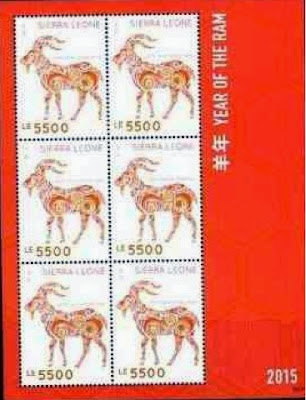 St. Kitts' foreign philatelic agents have issued a sheetlet of 4 different stamps and 1 miniature sheet which depict reptiles of the Caribbean region. I am not sure if any or all of the depicted species are actually found in St. Kitts itself but I believe that the miniature sheet depicts sphaerodactylus sabanus which, according to Wikipedia, is a regionally endemic species found in St. Kitts:- 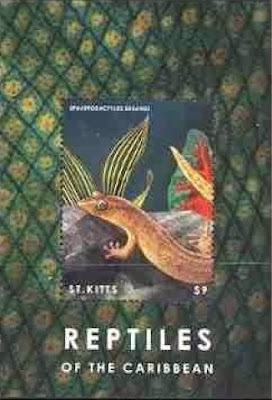 St. Kitts' philatelic agents have also produced another sheetlet of 4 different stamps and 1 miniature sheet to add to the items featured in Blog 494 on the subject of the centenary of the beginning of the First World War. There has been no attempt by the designer to link the subject of the new stamps to St. Kitts itself and these latest products feature First World War tanks:- 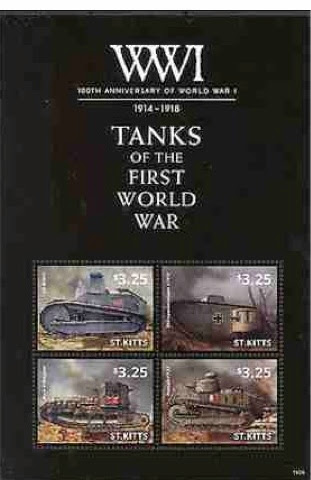 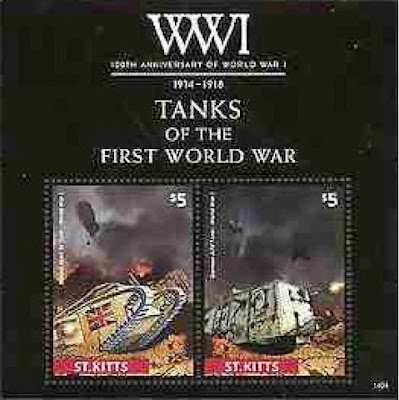 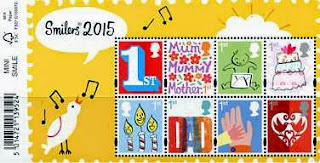 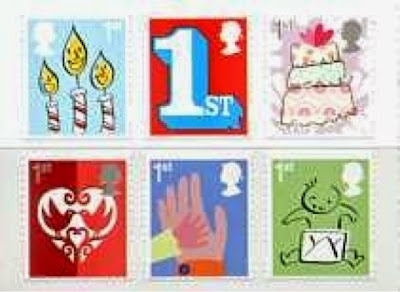 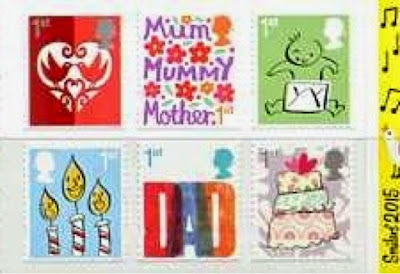 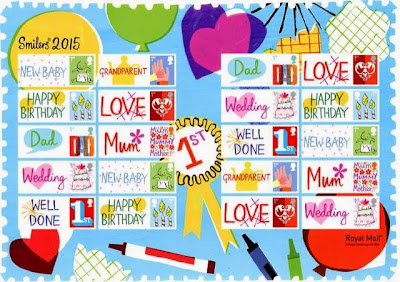