The recent history of Sierra Leone has been full of tragedy. From 1991 to 2002 the country experienced a terrible civil war which required foreign intervention to put an end to it, firstly by forces from other West African countries and then by British forces which finally defeated the Revolutionary United Front and retook the capital Freetown so that the Sierra Leone president, Ahmed Kabbah, was able to declare the war ended on 28 January 2002. Although Sierra Leone's foreign philatelic agents have issued many hundreds of stamps in the name of Sierra Leone in the years since the ending of the war, no philatelic items have ever been released to commemorate the end of the civil war or the nation's subsequent recovery.

In the ensuing years Sierra Leone did indeed recover from the events of the late 1990's but now a new disaster has struck the country. In May 2014 cases of Ebola virus disease began to be reported in the country, the outbreak having started in the neighbouring country of Guinea a couple of months before. The disease rapidly spread and is now causing many deaths in Sierra Leone and its neighbours  and has affected the country's postal communications with other countries.
I have recently obtained a 2014 cover from Sierra Leone which I describe below and which is relevant to the current postal and philatelic situation of the country. The stamps applied to the cover are reprints of the current definitive set which depicts local bird species and which first appeared in 1992. This definitive set is one which has had one of the longest periods of continuous use in The Commonwealth and as such is of great interest to collectors. It is fascinating that one rarely sees covers from Sierra Leone to which the multitude of agency produced thematic stamps have been applied and the cover below is a fine illustration of how day-to-day postal requirements are met by long-serving definitive stamps and that most of the non-definitive stamps on the market are an irrelevance to postal needs.
It is interesting to look at the 1992 definitive series and to reflect that it has become a surprisingly complex issue as the years have passed. The set originally comprised 21 values which were issued on 1 December 1992 and the excellent "Birds" designs were produced by the great artist and stamp designer, Jennifer Toombs, and printing was carried out by House Of Questa on unwatermarked paper. The values were 50c, Le1, Le2, Le5, Le10, Le20, Le30, Le40, Le50, Le80, Le100, Le150, Le170, Le200, Le250, Le300, Le500, Le750, Le1000, Le2000 and Le3000. All the designs are depicted above and below:-

A Le10,000 value was added to the series on 18 May 1999, this time depicting a Northern Shrike (Lanius excubitor). Again, the excellent design was by Jennifer Toombs and printing was in lithography by House Of Questa:-

The most recent reprint of these definitives was released with a "2006" imprint. On that occasion 9 values were issued - Le200, Le250, Le300, Le500, Le750, Le1000, Le2000, Le5000 and Le10000. The cover which I recently obtained, as mentioned above, has 7 of the Le1000 values of the 2006 reprints attached to it.
It is an airmail cover sent to The Netherlands and has a double ring cancellation of the town of Moyamba which is situated in the south-west of Sierra Leone and which had a population of 12000 in the 2004 national census. The postmark - "MOYAMBA SALPOST" - is dated 20 August 2014. This is an interesting date as regards the current Ebola outbreak since it is dated just 1 day before Royal Mail suspended its mail services to Sierra Leone after the suspension of international flights from The United Kingdom to Sierra Leone and Liberia. I suspect that mail services between Netherlands and Sierra Leone must also be suspended though I can not say if the date of suspension was the same as that as when Royal Mail services were suspended but if it were so then we may say that the cover illustrated here entered the mails only just in time for it to be carried to its intended destination:- 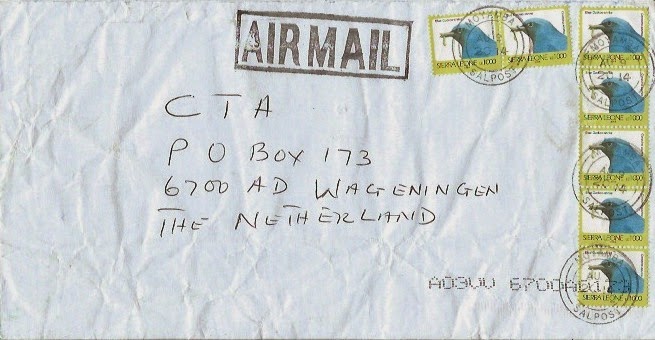 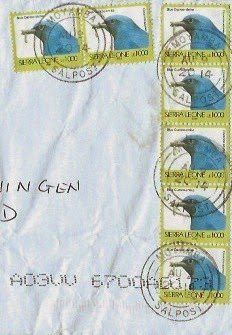 This cover then is an interesting item of the modern postal history of Sierra Leone and not only relates to the Ebola outbreak but illustrates that the prepayment of postage in the country is mainly indicated by definitive stamps which have been in use for 22 years rather than any of the multitude of thematic stamps which are produced by the country's prolific foreign philatelic agency.