Hot on the tail of the news that Stamperija has begun issuing stamps with the name of Uganda inscribed on them comes the news that the company has started to issue stamps for another Commonwealth country:- The Solomon Islands.  It appears that a large number of stamps were released on 5 June 2012 including 2 sheetlets of 4 and 5 stamps and a miniature sheet to commemorate the Diamond Jubilee of Queen Elizabeth II (she is, of course, Queen of The Solomon Islands as the sheetlet points out). The sheetlets in fact appear to be the sheetlet of 4 and the miniature sheet printed se-tenant with rouletting between them - possibly the first case of se-tenant miniature sheets. 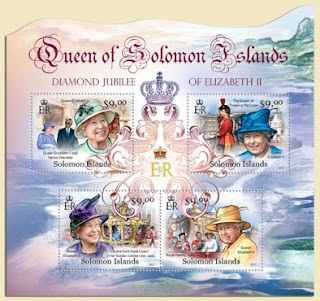 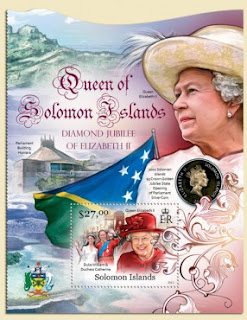 Such an issue is not therefore inappropriate but one may hesitate to say something similar about some of the other issues that have been produced among which are 2 sheetlets of 4 and 5 stamps and a miniature sheet which commemorate the US actress, Marilyn Monroe, and similar items released to commemorate the centenary of the sinking of the RMS Titanic in the north Atlantic (a long way from the south Pacific). Two sheetlets of 4 and 5 stamps and a miniature sheet are issued to commemorate Archbishop Desmond Tutu who helped set up the Solomon Islands Truth & Reconciliation. Commission in 2005. 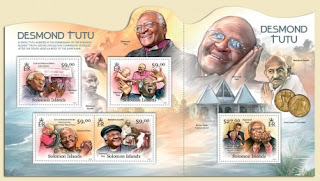 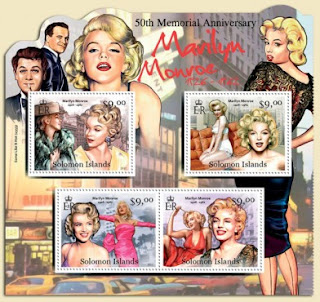 A few other of the sets which have been publicised do have a direct subject relevance to the islands such as Solomon Islands volcanoes, Solomons cathedrals (really just an excuse to depict the philatelically popular Pope John Paul II) and bats of The Solomons but I feel sure I will not buy any of them given the excessive nature of the number of stamps issued (24 sheetlets (108 stamps)and 12 miniature sheets) and the typically exploitative nature of the stamps. I shall be very interested to know if any of them actually get used on ordinary mail in the islands. O dear, things keep getting worse.
Posted by White Knight at 14:11