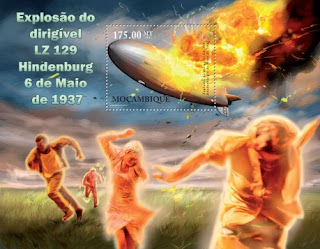 While the serious collector of modern Commonwealth stamps might wish to immerse him or herself in any number of fascinating collecting areas such as surcharged stamps of the last few years from Fiji or Tonga or Ghana or even the immensely difficult surcharged issues of Mozambique from 1998 onwards, there really are some astonishing distractions being produced by philatelic agencies. The agency Stamperija has just announced its latest productions for Mozambique which are really quite bizarre. With an issue date given as 28 February 2012 "Anniversaries in 2012 - I" a set has appeared which consists of 10 sheetlets each of 6 stamps and 10 miniature sheets centred around 10 different themes none of which, quite remarkably, have any relevance whatsoever to the country whose name appears on these items.  The most extraordinary item of them all is that pictured above which commemorates the "explosion of the Blimp LZ 129 Hindenburg May 6. 1937".  The illustration is of the Hindenburg with flames pouring out of it and ghost-like figures illuminated by the horrific fire running away from the crashing aircraft.  The "design" is utterly gruesome and horrific. Other sub-sets include a commemoration of the discovery of the bust of Queen Nefertiti  of Egypt:- 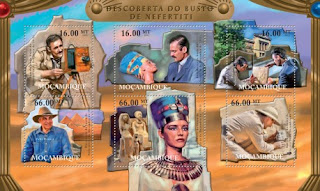 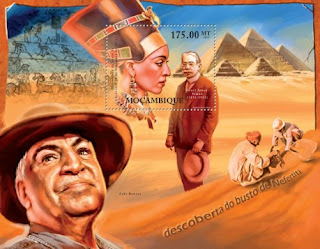 There is also a commemoration of the late Whitney Houston, a US popular singer who died on 11 February 2012 which means that if the issue date is correct then these stamps were "issued" just 17 days later. An extraordinary feat, you might think, to design the stamps, print them, fly them out to Mozambique and organise their sale over Mozambique postal counters for use on mail in such a short time. Or not, as the case may be. 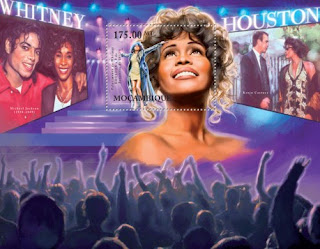 There is a commemoration of the film director, Milos Forman whose work included the Oscar-winning "One Flew Over The Cuckoo's Nest":- 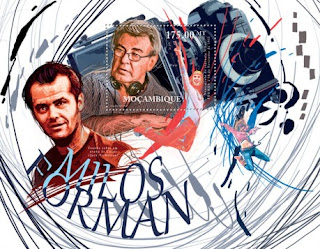 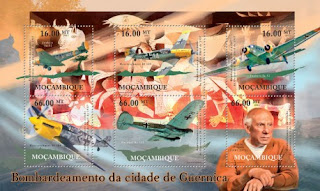 The cost of these items is very high and it is difficult to imagine any collector of modern Mozambique stamps (are there any?) wanting to add them to their collection even if they are the most obsessional completeist but are even thematic/topical collectors prepared to spend their money on such products? Apparently yes, because Stamperija keeps churning them out. Somebody must be buying them. Fascinating, isn't it?
Posted by White Knight at 04:00