The Cook Islands has announced its continuing new issue spree will include a set of 3 stamps issued in a sheetlet of six along with a miniature sheet which contains all three values (see below). The designs make no attempt to link the islands with the event. The designs look typical of those produced by Derek Miller and it looks as though Philatelic Collector Inc. is using him  to design many of the stamp issues it is producing for Tonga and The Cook Islands and their subordinate philatelic entities. I'm sorry to say that most of the designs are very uninspired. 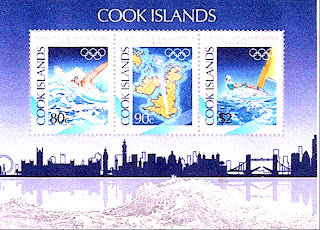 Philatelic Collector Inc. has also produced a barrage of issues for Tonga and Niuafo'ou. Thus we have a set of 3 stamps and a miniature sheet to commemorate the London Olympics, again designed by Derek Miller. 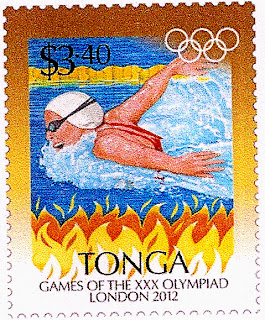 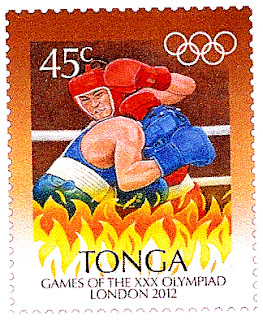 There is a sheetlet of 6 stamps to commemorate the 1st anniversary of the introduction of democracy to Tonga which resulted from the work of the late King George Tupou V. This is an interesting issue and features the prime minister, Lord Tu'puakano, in the middle of the sheetlet but the 6 stamps themselves seem to include some unnecessarily high values including $5, $8 and $10. 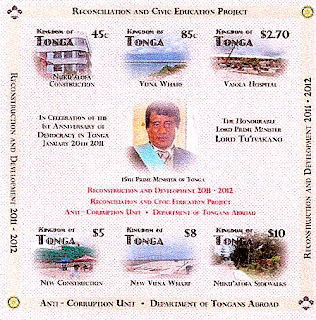 In addition to the above Tonga is also to issue a set of 4 stamps and a miniature sheet to commemorate ANZAC Day and 4 stamps in a sheetlet plus a miniature sheet of 2 stamps to commemorate the sinking of the RMS Titanic in the north Atlantic Ocean, a long way from the south Pacific (1 issue each for Tonga and Nuiafo'ou). Meanwhile, back in The Cook Islands, there is an issue of 12 definitive stamps for the island of Aitutaki, which features whales and dolphins. Needless to say, these stamps are also being produced in a sheetlet which includes all the values which means that completist collectors will have to buy double the number of stamps at, of course, double the cost. 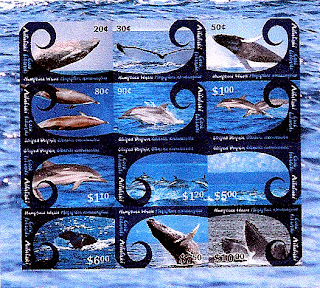 Sports and London is a big theme at the moment with the upcoming Olympic Games. Universal Mail United Kingdom has got in on the act by issuing a booklet of 5 different stamps on the subject of "Celebration of Sport". The imprint at the base of the booklet gives the date 11/11 but I think the item became available in early 2012, possibly January. The designs feature 5 Olympic sports (though there is no reference to the Olympic Games) with depictions of London landmarks used as backgrounds. The set has been added to the Universal Mail United Kingdom Checklist in the blog dated 19 June 2012.

In a previous blog (29 May 2012) I mentioned the depiction of the current British prime minister, David Cameron, on some stamps issued by The Gambia on 25 July 2011 to note the visit of the President of The United States to Britain. Mr. Cameron was not the only Commonwealth head of government to achieve philatelic depiction as a result of the US presidential travels - Julia Gillard, the Australian prime minister, has also appeared on a sheetlet of 4 stamps and a miniature sheet which was issued by Tuvalu on 15 June 2011 to commemorate the president's visit to Australia. It was a pity that the The Duke of Edinburgh was taken ill during the diamond jubilee celebrations of Queen Elizabeth II but in some ways not surprising given his age, 91 years, and the terrible ordeal that he and The Queen were put through during a long, wet, bitterly cold English weekend. In an act of gross cruelty, the organisers of a pageant of boats sailing up the river Thames made the elderly couple sit out in the cold, strong wind and driving rain for several hours. At least by being ill, The Duke escaped from having to sit through a long and tiresome concert, given largely by poorly-preserved aged musical performers who were well passed their sell-by dates as well as young musicians whose sort of music could not possibly be expected to appeal to an elderly lady. I mention all this merely to draw attention to a sheetlet issued by Royal Mail to commemorate the 90th birthday last year of The Duke Of Edinburgh. It fits in very nicely with the Diamond Jubilee theme. 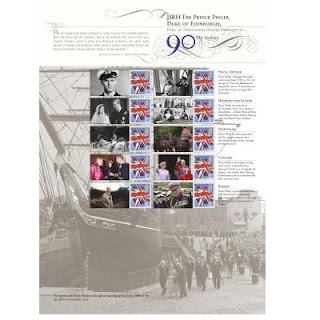 Finally, having recently drawn attention to Samoa's independence 50th anniversary set which is being issued this year, one worthwhile set which did escape mentioning at the end of 2011  was the pair which Samoa released to commemorate the alteration in the positioning of the International Dateline whereby Samoa became the first country in the world to experience a new day rather than the last to do so. By this alteration the citizens of Samoa lost a whole day. A momentous event for the island state and worthy of a stamp issue which was released on 1 December 2011. 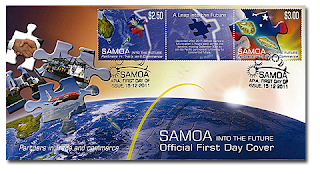