Over the years stamps have featured numerous unpleasant dictators, corrupt politicians, over-rated entertainment celebrities and overpaid sportsmen, but sometimes people of true worth find their ways on to postage stamp designs. On 10 April 2012, Australia issued a set of 5 gummed stamps and 5 self-adhesive coil stamps which commemorated medical doctors of great note and great worth. All 5 values were in the domestic postage rate of 60c and the designs featured Dr. Jane Stocks (1872 - 1939) who, with her sister, founded the Queen Victoria Hospital in Melbourne and worked to improve the health particularly of children of the time. Dame Kate Campbell (1899 - 1986) was a paediatrician who demonstrated the link between blindness in premature babies and oxygen levels in neonatal incubators. She was awarded the OBE in 1971. 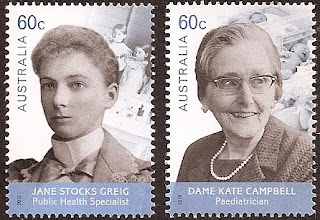 Victor Chang, a cardiac surgeon, established Australia's National Heart Transplant Programme and pioneered the development of an artificial cardiac valve. Professor Christopher O'Brien was a specialist in surgery of the head and neck and his work in cancer care was pioneering and this led to the establishment of a cancer treatment and research centre in Sydney. 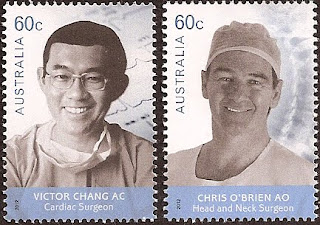 Professor Fred Hollows, an ophthalmologist, was born on 9 April 1929 in Dunedin in New Zealand and lived the first seven years of his life there before his family moved to Palmerston North where he attended Palmerston North Boys' High School. He enjoyed mountaineering and became a friend of Sir Edmund Hillary, the conqueror of Mount Everest. From 1961 to 1965, he studied ophthalmology as a young doctor in Great Britain (firstly at the world-famous Moorfields Hospital in London and then in Cardiff). He then moved to Australia to work in ophthalmology in Sydney and in the 1970's pioneered the treatment of trachoma, halving curable blindness in the Australian Aboriginal population. He worked in rural settlements surveying and providing health care services. As a consultant for WHO he attended a meeting in Egypt in the mid-1980's and subsequently paid his first visit to Eritrea and realised that people in such countries were suffering blindness because of the lack of basic medical resources. He established intraocular lens laboratories in Eritrea and Nepal where such lenses are produced for a tiny fraction of the cost of those produced in western industrialised countries as a result of his work. Professor Hollows died at the age of 64 on 10 February 1993. Eritrea issued a memorial set of 3 stamps which is reported to have been issued on that date though I think that that is improbable. 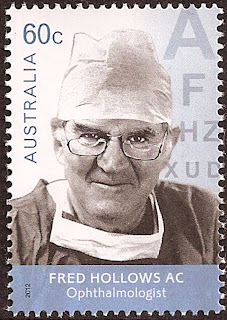 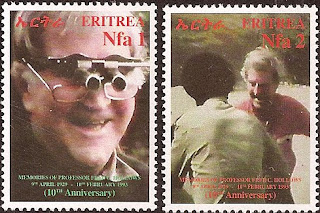 The stamps draw attention to the Eritreans' great respect for Professor Hollows. In the capital of Asmara there is a street named after him near the Presidential Palace and it is in that street that the Fred Hollows IOL Laboratory still carries on his work. These stamps are very interesting and very worthwhile and underline why the collection of Commonwealth new issues can still be very rewarding despite the tsunami of worthless new issues from so many philatelic agencies. 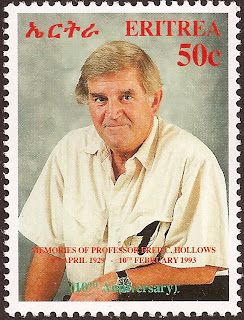 Another new issue of great interest is a set of 4 stamps from Anguilla which depicts "revolutionary coins" which were coins from Mexico and Panama and elsewhere which were counterstamped "Anguilla Liberty Dollar 11 July 1967" at the time of the Anguillan rebellion against rule from St. Kitts. About 1000 such coins were so treated and sold mainly on the US market to generate funds for "the revolutionary cause". The coins consisted of 3 differently valued coins from Mexico and one each from Panama, Philippines, Peru and, strangely, Yemen. Two such coins are featured on the 15c and 40c values. 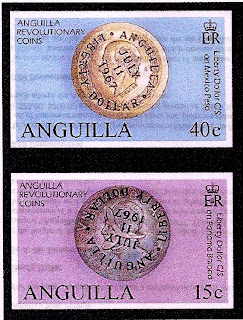 Commemorative coins were also minted to celebrate the 1st anniversary of "Independence" in values of EC$25, EC$200 and EC$1500. The coins depicted a portrait of Ronald Webster, the leader of the rebellion, on the reverse and and the three dolphins, the motif on the rebels' flag, on the obverse. The coins were produced in gold, silver and platinum (sounds like some modern philatelic collectibles from places like Jersey!) and the design of one of these coins is depicted on the $2.50 stamp. The $5 stamp shows a rare coin which features the Anguillan coat of arms which was minted in 1970. The design depicts the mahogany tree, a symbol of strength, which is a historic landmark at the geographical centre of Anguilla, and a dolphin leaping from the sea. It is interesting that these stamps have been produced now at the time of the Queen of Anguilla's Diamond Jubilee (I have not yet seen any reports of an Anguillan Diamond Jubilee stamp issue) - perhaps the issue has a continuing note of rebelliousness about it. 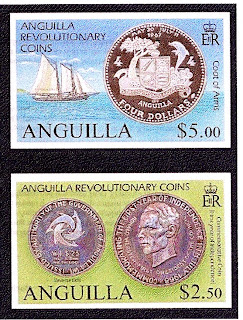 Finally, an interesting error in my collection on one of the 30c values of the 1995 Tourism set from Kiribati. The stamps were produced in a se-tenant strip of 5 different stamps,each of the same value, as well as in a booklet of 10 stamps as depicted below. 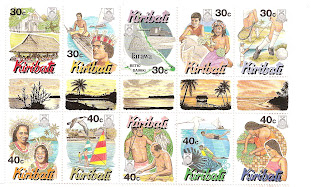 The "gun emplacement and map" design stamp in my booklet correctly names the island of Betio but the stamp from the strip taken from ordinary sheets names the island as Beito. This must be a constant error but it is not mentioned in the 2009 Stanley Gibbons Western Pacific Stamp Catalogue although it is hard to believe that it is not a known error, given the popularity of Kiribati as a country to be collected. 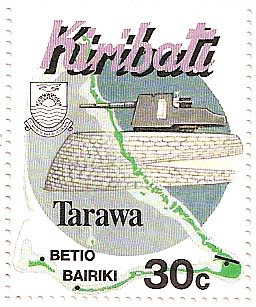 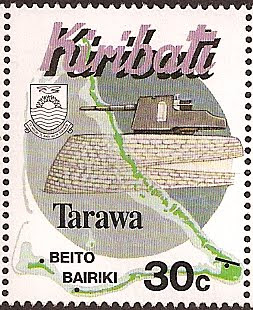