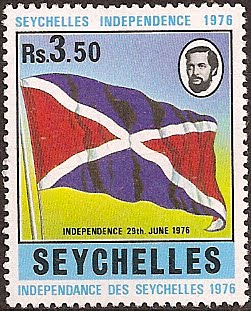 In Britain this weekend, the celebrations of the Diamond Jubilee of Queen Elizabeth are in full swing and on 5 June 2012 a service to mark the jubilee will be held in St. Paul's Cathedral which will be attended by many people including Commonwealth leaders. This is reminiscent of the Queen's Silver Jubilee in 1977 when many Commonwealth leaders were in London to attend the Commonwealth Heads Of Government Meeting. For one of them at least, it was to be a disastrous occasion. Seychelles had achieved independence on 29 June 1976 and became a republic within The Commonwealth with James Mancham as its first president and his political opponent, France Albert Rene, as the first prime minister. The philatelic consequences of these events were that while still using the Crown Agents to produce some of its stamps, the Seychelles Post Office also allowed a large New York-based philatelic agency to produce and market stamps on its behalf. The result was that a number of issues which appeared were more relevant in subject matter to the USA than Seychelles. One such issue was a pair of stamps which not only commemorated the independence of Seychelles but also commemorated the bicentenary of the declaration of independence of The United States. The pair are depicted below cancelled on the first day of issue at Victoria, capital of Seychelles. Both stamps include a portrait of President Mancham which was also a feature of the set of 8 stamps produced by The Crown Agents to commemorate Seychelles independence (the highest value featuring the first national flag is illustrated at the head of this blog). 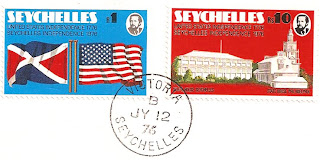 The following year was, as stated above, the year of the silver jubilee and President Mancham left Seychelles to attend the celebrations in London. On 5 June 1977, Albert Rene took moves to depose Mancham and make himself president and Mancham was exiled in London. A set of 8 stamps, 4 depicting items of the crown jewels and 4 depicting the Queen and distant views of islands of Seychelles, and a miniature sheet was due to be released by Seychelles to commemorate the silver jubilee but due to the fact that they depicted James Mancham, their release was delayed. The stamps were eventually released on 5 September 1977 with Mancham's portrait removed. 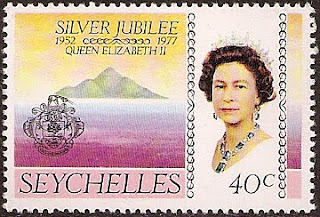 We get an impression of the original design of these stamps because the Crown Agents Bulletin had already published illustrations of some of the stamps as they were intended to be issued with the portrait of Mancham illustrated on them. 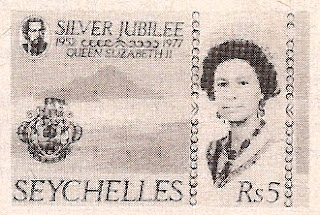 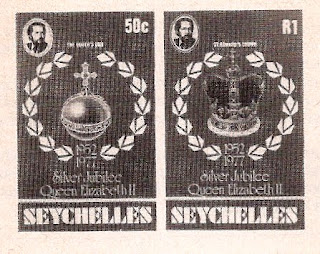 Apart from some overprinted definitives which had originally been issued in 1969, the first definitive set of The Republic Of Seychelles was issued on 10 November 1977 and consisted of 16 stamps which depicted Seychellois natural history. 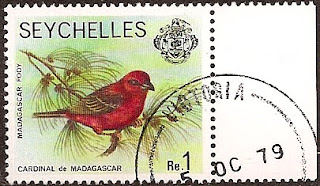 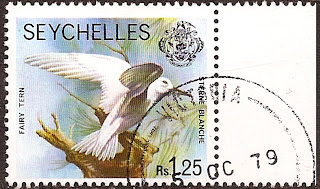 The release of this set was severely delayed by the coup as The Crown Agents Bulletin had illustrated the set at the same time as depicting the silver jubilee issue in 1976, again with President Mancham's portrait depicted on the stamps. 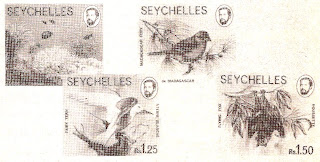 Another startling immediate philatelic result of the coup was the issue of a stamp and miniature sheet with a distinctly revolutionary look about it, which was printed at the State Printing Works in Moscow and commemorated the 60th anniversary of the "Great October Socialist Revolution". The items were typical in appearance of issues produced by The Soviet Union at the time. At least this issue heralded the end of any influence the New York Agency might exert on the type of stamps coming from Seychelles. 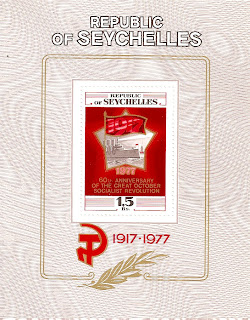 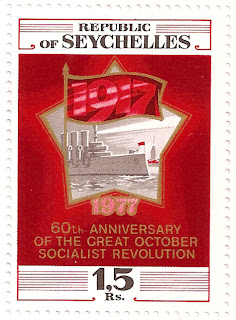 So, this political event had substantial outcomes for the contemporary and future stamp issues by Seychelles. If it had not occurred, we may well have seen countless later issues which depicted Mickey Mouse, Marilyn Monroe, Elvis Presley and other American icons. 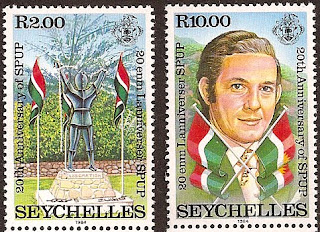 Albert Rene himself was only depicted on 1 postage stamp issued by Seychelles. The stamp was one of a set of four issued on 2 June 1984 to commemorate the 20th anniversary of Rene's political party, the Seychelles People's United Party (SPUP). The stamp also showed the new national flag which was adopted after the coup on 29 August 1977, being an adaptation of the party flag of the SPUP (this is another example of the change of a national flag following a political change as discussed in the previous blog). The R2 value depicted a rather unimpressive ironwork statue, the "Zombre Libre"which had been erected in Victoria. The name in Creole does not mean the "Free Zombie", as you might think when you look at this horrible piece of modern art, but instead it means "Free man". For years the air of radicalism hung over Seychelles and "Liberation Day" was celebrated annually. On 5 June 1978, a set of 4 stamps was released to commemorate Liberation Day and the designs had a distinctly revolutionary air about them which seemed quite out of step with the peacefulness of the beautiful islands. It really did not seem fitting to depict guns with bayonets fixed and soldiers with rifles on a Seychelles issue. 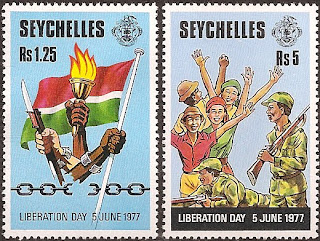 The subject also clashed terribly with the fact that Seychelles wished to attract tourists - the illustration below shows one of the 1978 Liberation Day stamps, admittedly less militaristic than the 2 values depicted above, postmarked rather incongruously by the slogan "Tropical Island Holidays Seychelles Indian Ocean". 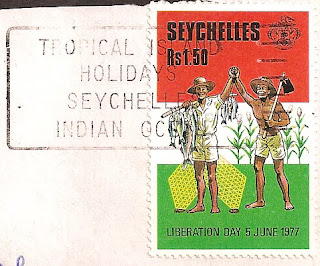 No doubt Commonwealth leaders in London for the diamond jubilee celebrations of 2012 will hope that they do not suffer the fate of James Mancham and fall victim to a "Jubilee Coup".