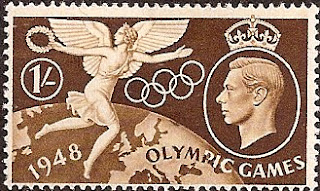 With the Diamond Jubilee celebration issues behind it, Royal Mail, the British Post Office can now concentrate on its outpouring of stamps to commemorate the Olympic Games to be held shortly in London. This will be the third Olympic Games to be held in London and there is a large number of British stamp issues which have drawn attention to all three occasions when the games were held in London. The first time the games were held in London was in 1908. No commemorative stamps were issued by Britain at the time. 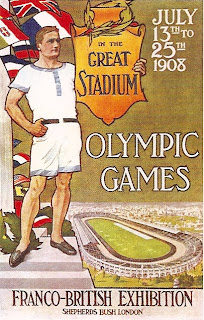 However, a sheetlet of 10 "Union Jack" stamps with illustrated labels attached, was issued by Royal Mail on 24 July 2008 to commemorate the centenary of the first London Olympic Games. The sheet, designed by Neon Design, is both very interesting and very collectable for Olympic Games collectors. 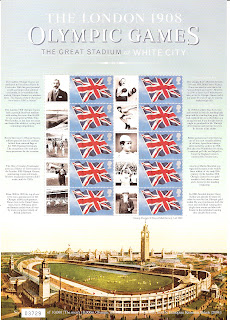 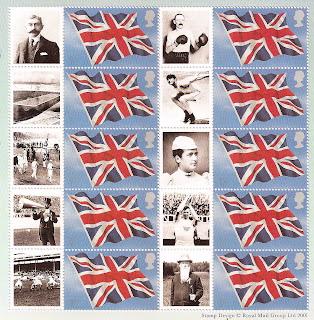 The fifth label in the left hand column depicts the US Tug of War team. The event was included in the games from 1900 to 1920 and it seems to me that it would be rather a fun event to reintroduce to the Games. All 3 medals were won by British teams in 1908.

The middle label in the right hand column depicts a splendid woman called Louie Dod who won a silver medal in archery in 1908 but in addition had won the Wimbledon tennis competition 5 times, won a national golf title and helped to found the England women's hockey team. If ever there was a sporting hero, Louie Dod qualified to be called that.

After the end of World War 2, London staged the first Olympic Games of the new peacetime in 1948. The Post Office issued a set of 4 stamps to commemorate the event on 29 July 1948 and the designs caught the art deco spirit of the age. The designers were Percy Metcalfe, Abram Games, Stanley D.Scott and Edmund Dulac and the stamps were perfectly printed in photogravure by Harrison and Sons. 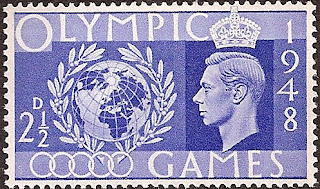 The ever increasing greed for financial profit, at whatever the cost, resulted in The Post Office issuing 2 stamps on 7 April 1992 to commemorate for the first time an Olympic Games held in a foreign country. The stamps marked the Olympic Games which were held in Barcelona that year and depicted the flags of the British Olympic and Paralympic teams.

The issue was accompanied by 5 definitive stamp booklets with the British Olympic and Paralympic logos on their covers - 4x 2nd class stamps, 10x 2nd class, 4x 1st class and 10x 1st class. They were printed in lithography by Walsall Security Printers and issued on 21 January 1992 while a 10x 1st booklet, printed in photogravure by Harrison was also issued on the same day. A sixth booklet, another 10x 2nd booklet, was released on 31 March 1992 and was printed by The House Of Questa. 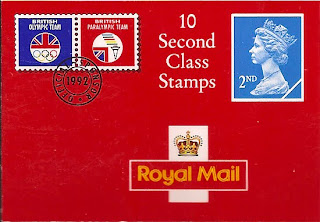 On 9 July 1996, 5 rather uninspired stamps were issued in a setenant strip to commemorate the participation of the British Olympic and Paralympic teams at the games in Atlanta.

These designs were reused in an even more uninspired miniature sheet which was issued on 5 August 2005 to commemorate the award of the games to London. 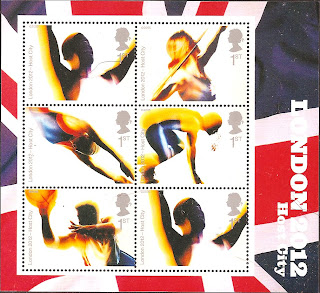 On 22 August 2008, at the end of the Beijing Olympic Games, Royal Mail issued a miniature sheet as a joint issue with The Chinese People's Republic, which contained 4 stamps and which commemorated the hand over of the Olympic flag by Beijing to London. The designs featured landmarks in London and Beijing including the London Eye and the Tower of London. 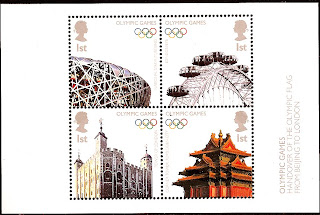 The first stamps to commemorate the 2012 Games were issued on 22 October 2009 and consisted of 2 setenant strips of 5 stamps each, a different sport of the Olympic or Paralympic Games being featured on each stamp. Each design was produced by a different artist although the overall designs were produced by Studio David Hillman. The set was the first part of what amounted to 30 stamps, 10 more being released in 2010 (27 July) and 10 more in 2011 (also, 27 July). 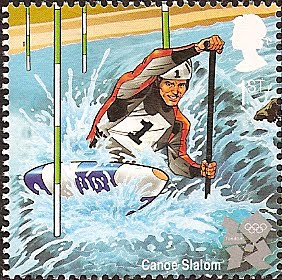 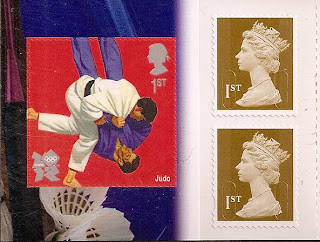 On 27 July 2011, a "stamp sheet", sold for £13.80p, was issued and contained all 30 stamps released between 2009 and 2011. It is so big it is impossible to decide how to incorporate it in one's collection. But it is rather colourful, I suppose. On 5 January 2012, 4 "Olympic definitives" were issued (previously described in the blog of 8 January 2012). Still to come is an Olympics and Paralympics "souvenir sheet", comprising 16x 1st stamps and 4x "Worldwide" stamps to be issued on 7 June 2012, Olympic and Paralympic "Welcome" issues, Olympic and Paralympic "Memories" issue on 27 September and, most worryingly, the "Team GB Gold Medal Winners" miniature sheets to be released within 24 hours of a Briton winning a gold medal. I feel particular alarm since an article in the June 2012 Philatelic Exporter states that "Team GB Gold Medal Winners stamps for both (ie Olympic and Paralympic (will be) produced and ready for sale the day following the victory". I hope this is not right.
Up until now Royal Mail has suggested to collectors that there will be about 20 miniature sheets produced for Olympic victories but if they are also produced for Paralympic winners, then we might be truly stung if we want an example of each since Great Britain was the second biggest Gold Medal winner in Beijing with 42 Paralympic champions. We may find that added to the £68.40p Royal Mail expects to obtain from each collector for the Olympic winners issues, a further £165.60 will be extracted for the Paralympic stamps. Surely this can not be so.
Remember too, that there are 6 different printers of these miniature sheets and many collectors will probably require an example of each printer's work which would amount to a total cost of £410.40 for the Olympics set and, wait for it, £993.60 for a Paralympics set (grand total £1404.00p!!!). Surely, Royal Mail can not really be planning to maul collectors in such a fashion. It is all a far cry from the modest set of 4 stamps which Great Britain issued for the 1948 Olympics,total cost: 1 shilling and 11 pence-halfpenny (just under 10p).