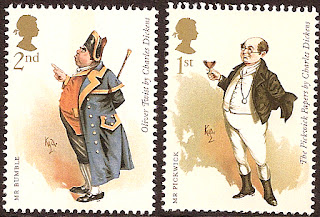 I have now received my set of 6 stamps and accompanying miniature sheet issued by Royal Mail to commemorate the birth bicentenary of the novelist Charles Dickens. Although I have previously written on this subject in the blog of 15 April 2012 I could not resist illustrating all the various stamps with their brilliant depictions of some of Dickens' splendid characters which appear in his various novels.  I really think that this could turn out to be the best Commonwealth stamp issue of 2012.  Admittedly, the art work used on the stamps is not original but the illustrations so fully capture the characters that they make perfect stamp designs. The art is by Joseph Clayton Clarke, known as Kyd, who prepared the pictures for the book Character Sketches From Charles Dickens which was first published c. 1890. Mr Bumble, the beadle in Oliver Twist, is shown on the 2nd class domestic rate stamp and surely no-one has ever so perfectly depicted the character before or since. In my previous blog I discussed Pickwick who appears on the 1st class domestic rate stamp. 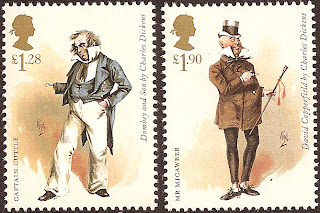 Captain Cuttle, from Dombey And Son, Dicken's 7th novel, written while he was living in Switzerland and Paris and published serially from 1846 to 1848, makes his first ever philatelic appearance on the £1.28 value and Mr. Micawber, from David Copperfield, is shown on the £1.90 value, looking for all his worth like the character played by WC Fields in the movie version of the novel some decades later. I think that with Micawber, Royal Mail missed a trick as the character would have made an excellent subject for a joint Dickens issue with Australia since at the end of the novel, Micawber and his family set off to emigrate to Australia and start a new life there. Perhaps the Australians would not have been too keen to include another Dickens character in the set - Magwich from Great Expectations - whom Pip, the selfish "hero" of the book meets at the start of the novel when Magwich is being transported to the penal colony in New South Wales only to return illegally some years later to see how Pip is doing with the "great expectations" that Magwich has conferred on him. 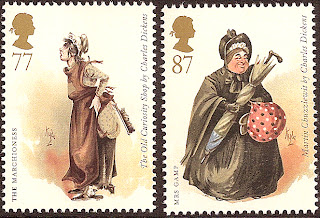 The dreadful midwife, Sairey Gamp, from Martin Chuzzlewit, is shown on the 87p and The Marchioness, from The Old Curiosity Shop, appears on the 77p value. Interestingly, both of these characters, along with Micawber and Barnaby Rudge, appeared on 1970 issue of The Cayman Islands which was  designed by the wonderful artist and designer, Jennifer Toombs (see blog of 15 April 2012). The 2012 British miniature sheet contains four 1st class (60p) stamps. One, depicting Nicolas Nickleby, is shown in the 15 April blog and another design features a scene from A Tale Of Two Cities,  Dickens' twelth novel. The two stamps illustrated above show a scene from Bleak House, the 9th novel published from 1852 to 1853, and depicts the philanthropist, Mrs. Jellyby, who neglects her own family while entirely devoting herself to foreign charities. The second illustration depicts a scene from Little Dorrit, the 11th novel published from 1855 to 1857. All the miniature sheet illustrations are taken from the work of Hablot Knight Browne, known as Phiz. The margin of the miniature sheet carries a facsimile of Dickens' signature and a quotation from his last completed novel, Our Mutual Friend, "No one who can read a book, ever looks at a book, even unopened on a shelf, like one who cannot". I hope that by the end of the year that other Commonwealth territories will have produced Dickens commemorative stamps and that they are as interesting and attractive as the Royal Mail issue is. Meanwhile I also include a much bigger and clearer illustration than I have previously shown of the Guyana miniature sheet which was prepared to commemorate the 75th anniversary of the accession of King Edward XIII (see blog of 23 March 2012). Although a correction has been made, I wonder if any examples of this hilarious design error will turn up. 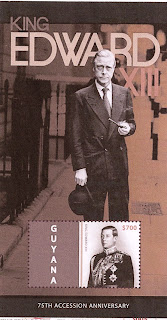 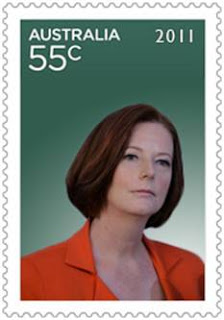 Finally I include an item I found on the internet after I had mentioned the stamps which were issued last year by Tuvalu which depict the Australian prime minister, Julia Gillard, with the US President. The illustration is that of a spoof stamp mocked up and posted with the accompanying, rather rude text: "Details on why the Julia Gillard stamp was almost recalled by Australia Post....Australia Post have created and marketed a new stamp displaying a picture of the current Prime Minister, Ms Gillard. The prime minister had requested an immediate recall of the stamps following concerns that they were not sticking.  Australia Post have recently suspended the recall of the stamps after the findings of a special senate committee were released. The prime minister was told that the stamps were not sticking to the envelopes and the enraged prime minister demanded a full investigation. After a month of testing at a cost of $1.85 million, a special senate committee lead by the leader of the Greens, Bob Brown, presented the following findings:- 1. The stamp is in perfect order. 2. There is nothing wrong with the adhesive. 3. People are spitting on the wrong side of the stamp". Who said stamp collecting was boring?