🇿🇼  Now that Robert Mugabe has finally been removed from power in Zimbabwe (see Blog 1121) it is interesting to observe that although he ruled tyrannically he was never featured on a Zimbabwe stamp. It's interesting to observe this as we might expect ruthless dictators to wish to boost their public image further by promoting themselves on their nation's postage stamps But this was not the case with 'Comrade' Mugabe.

His first wife, Sally Mugabe, who was much respected and thought to have kept her husband's more disagreeable actions in check while she was alive, was featured on a set of Zimbabwe stamps issued in  2002 on the tenth anniversary of her death. His second wife, Grace, in contrast, whom Robert Mugabe was positioning to take over from him when he no longer ruled Zimbabwe, was extremely unpopular in the country and it was these manoeuvrings which led to the downfall of Mugabe himself. 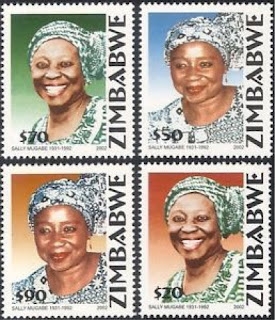 The modern Commonwealth has seen the coming and going of a large number of national leaders over the years and while some have been harsh or corrupt or ruthless there have been hardly any who would rightly qualify to be called 'Tyrants'. Doubtlessly Mugabe is one of those who fits into this group.
🇺🇬 Perhaps the worst of all in the history of The Commonwealth was Idi Amin Dada who seized power in a military coup in Uganda in 1971 deposing the obnoxious Milton Obote and then began his own reign of terror which lasted until 1979 when a combination of Tanzanian forces and the Uganda National Liberation Army invaded Uganda and sent Amin into exile in Saudi Arabia. It is said that between 100000 and 500000 people were killed as a result of the actions of Amin's regime.
Curiously, and similarly to Mugabe, Uganda did not issue any postage stamps which depicted the monstrous Amin during his time in power, though he was a great lover of publicity which featured him, apart from his appearance in the margin of a miniature sheet issued in 1978 to commemorate, of all things, the 25th anniversary of the Coronation of Queen Elizabeth II. 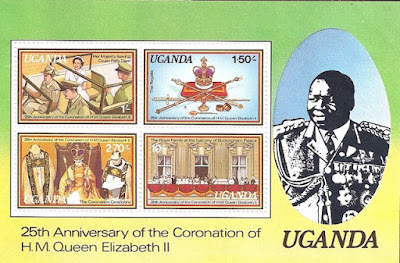 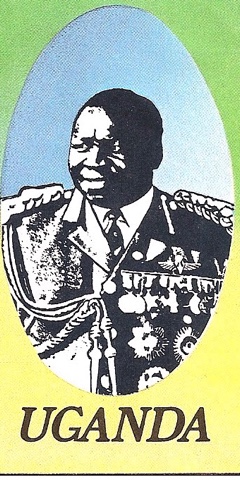 🇬🇲 Finally we must also mention here the monstrous President Sheikh Professor Alhaji Doctor Yahya Jammeh who seized power in The Gambia in a military coup in July 1994 and subsequently went on to establish himself as a dictator over that little country. His rule became more and more oppressive so that he eventually lost national elections in The Gambia in December 2016 but was only removed from power when military forces crossed the country's borders from Senegal and persuaded him to give up the presidency. The rule and removal of Jammeh are covered in previous Blogs including that of 18 April 2012, Blog 310 and Blog 906.
Jammeh has appeared on a number of stamps from The Gambia, firstly as a young military officer on a stamp issued in 1995 and later, in an issue of 2012, where he is depicted as the very model of a corrupt, monstrous, bloated dictator, though I'm sure that was not the intention of the design. 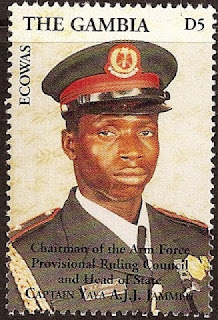 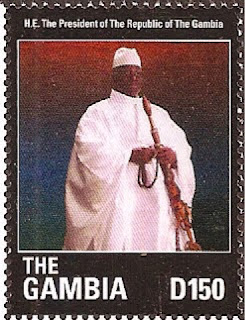