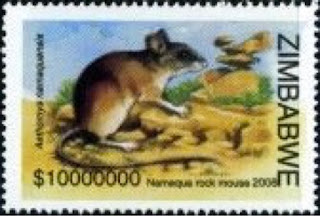 🇿🇼 News from Zimbabwe, which withdrew from The Commonwealth in 2004, suggests that the man responsible for many years of tyrannical rule in the country and Zimbabwe's departure from The Commonwealth, the 93 year old Robert Mugabe, may be nearing the end of his time in power as the country's army moves against his various lackeys and henchmen and arrests what it has labelled "criminals".
Several days ago, Mugabe removed from office the man seen as his likely successor, Emmerson Mnangagwa, to apparently make way for his wife, Grace Mugabe, whose love for luxury goods has led to her being named "The First Shopper", as his successor. This led to the head of the Zimbabwean army, General Constantino Chiwenga, leading what appears to be a military coup in all but name and reports suggest that the geriatric tyrant and his wife have been detained and some of his lackeys have been arrested. It will be interesting to see what happens next and what philatelic consequences arise.
During the period of Mugabe's extreme misrule, one of the greatest problems to be faced by Zimbabwe was a period of severe inflation. The peak was reached in 2008 when a set of 6 stamps and 1 miniature sheet, fittingly on the subject of "Rodents of Zimbabwe", was issued in which the two highest values were priced at $10000000 (10 million Zimbabwe dollars) and $5000000 (5 million Zimbabwe dollars). That woeful situation was only put right when the country abandoned use of the Zimbabwean dollar and began to use the US dollar.
The removal of Mugabe will hopefully set Zimbabwe on a new road. We will follow how events are reflected in the country's stamp issues. 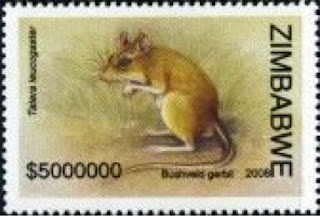 🇧🇩 Bangladesh Post issued a single stamp on 5 June 2017 to commemorate the 80th anniversary of the Rotary Club of Dhaka. Not exactly the most exciting design, I fear. Rating:- *. 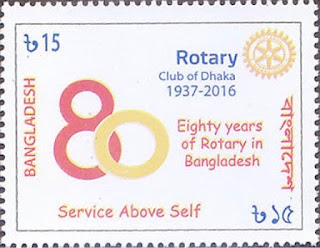 🇳🇺🇨🇰 In Blog 1120 I mentioned the latest issue from the Cook Islands (inscribed "Penrhyn") which features Bennett's Butterflyfish and I realised that this issue followed quickly on the issue of a set of "Fish" stamps from the postal service of Niue (see Blog 1075). One little fellow appears in both issues - dear old Bennett's Butterflyfish. The closely timed issue of these stamps helps us to compare what is being produced on the new issue scene at present - both stamps feature photographs of the same fish swimming in the same direction but look how much more vibrant and attractive the stamp from Niue is (prepared by New Zealand Post) compared with that of Penrhyn (produced by Philatelic Collector Inc.). Today it's easy to design a stamp but it's not that easy to design a stamp that's worth collecting. 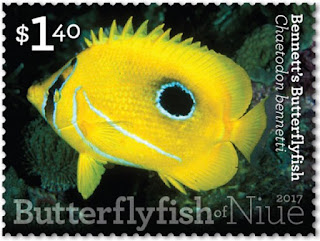 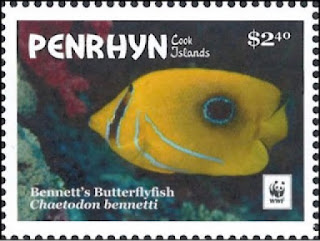