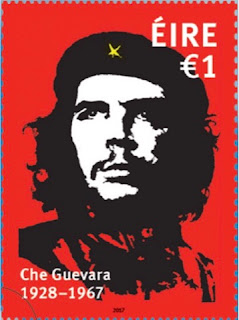 🇮🇪 An Post, the postal service of Ireland, issued a single stamp on 5 October 2017 to commemorate the 50th anniversary of the death of the Cuban revolutionary, Che Guevara, though the reason for doing so is completely lost on me. Perhaps it's all to do with The Republic Of Ireland having been founded in revolution itself.
It's certainly a striking design, the illustration being by Jim Fitzpatrick Design and the design by Red&Grey. The stamp was lithographed by Cartor and is perforated 14 x 14.5. Rating:- ***.
A single stamp was also issued on 5 October 2017 on the subject of "Postcrossing". It was designed by Oonagh Young Design from an illustration by Cathy Dinesen and lithographed by Cartor and perforated 13.5. Rating:- ***. 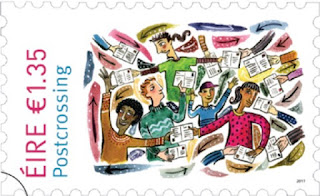 An Post will issue 3 Christmas stamps on 2 November 2017 in the form of a €1 stamp issued in a booklet of 26 self-adhesive stamps and 2 stamps, €1 and €1.35c, issued in self-adhesive coils. The illustrations are by Lis Rackard and the overall designs by Red&Black and the €1 value was lithographed by Cartor and the coil stamps printed by HP Indigo high resolution digital print. The €1 value is perforated 13 and the coil stamps are perforated 11 x 11.5. Rating:- ***. 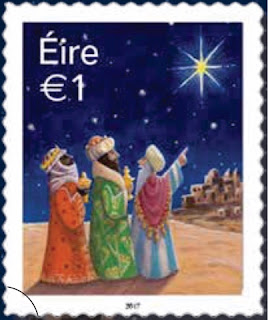 On 12 October 2017 An Post will issue a single stamp to commemorate the Centenary of the Apparitions of Fatima. The stamp was designed by 2b:creative and lithographed by Cartor and perforated 13.5. Rating:- ***. 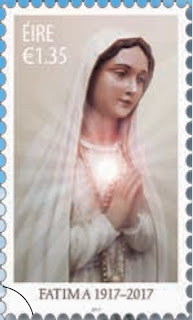 🇧🇲 A set of 4 stamps was issued on 21 September 2017 by the postal service of Bermuda to commemorate the 25th anniversary of the Bermuda National Gallery.
The 50c depicts a painting by the American artist William Howe Foote which is titled "Old Bermuda House" and the $1.25c value depicts a print titled "Cerise" by Janet Fish who grew up in Bermuda. The $1.35c value depicts a 1761 painting by Sir Joshua Reynolds and the $1.55c value depicts a wooden mask from the Baum people of Cameroon.
This is an attractive and interesting set which commemorates a worthy local anniversary. Rating:- *****. 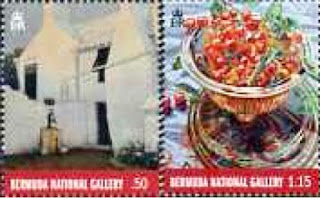 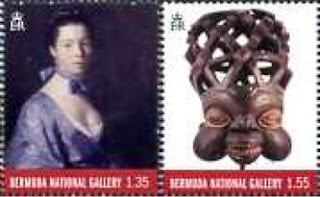 🇮🇳 India Post will issue a pair of stamps and 1 miniature sheet on 15 October 2017 on the subject of Chhatrapati Shivaji International Airport. Rating:- ***. 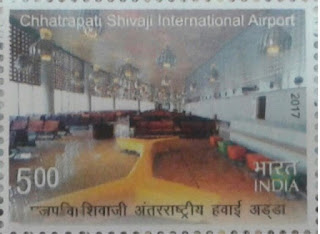