615. Post And Go Issues Flood In And Brave World War I Animals Featured On New Sheet.

Late August:- labels from kiosk A010 to be situated at a new site which will be a non-military museum. Details awaited.

16 September 2015 - Sea Travel (views of foreign cities and sights from ships) :-
A. From Series II machines situated at the Autumn Stampex Exhibition.
B. From NCR machines situated in various post offices throughout The United Kingdom.
C. In packs sold by the British Philatelic Bureau.
The complete face value of this issue is £23.04.
The views depicted are New York, Hong Kong, Sydney, Ha Long Bay (Vietnam), The White Cliffs of Dover and Venice. The issue was designed by Osborne Ross and printed in photogravure by International Security Printers. Rating:- ***. 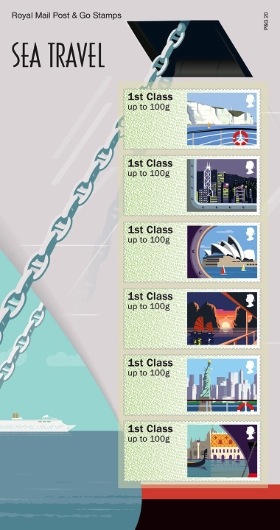 I must say that the choice of the subject for these items disappoints me immensely. Why are British stamps depicting views of foreign cities (apart from the White Cliffs of Dover)? Why not make a contribution to tourism promotion and depict interesting views of British ports and the British coastline on all 6 of the stamps? Or if Royal Mail really must depict foreign views why not include Singapore in the list so that the design could have been used in the kiosk being taken to the Singapore 2015 Philatelic Exhibition? Finally, why not depict views of British towns or the beautiful countryside not from ocean liners but from canal narrow boats? Such a big opportunity missed.

The total face value all of the above issues on which details are available is therefore £53.88p.

I have long given up buying Royal Mail's severely overpriced "Commemorative sheets" which are usually made up of 10 x 63p stamps (total face value £6.30p) but are actually sold for an astounding £14.95p (237% above face value). I can not understand why Royal Mail is so greedy in setting the price of these products. Many of them are very good and very interesting and if Royal Mail sold them at a somewhat lower price (say £9) I would be pleased to add them to my collection and I expect that this would be true of other collectors - what Royal Mail lost in profit from a single item would be made up for by selling a greater number of items.
Anyway, I have to admit that the latest commemorative sheet to be announced for issue on 17 September 2015 is a very appealing and tempting item - an issue on the subject of "Animals of the First World War" - highlighting the various roles of animals in the terrible conflict. The stamps in the sheet are the definitive-sized Union Jack stamps each with a different label attached to them. The 4th label in the 2nd row appeals to me particularly as it features an Airedale terrier, a breed which my family used to own until switching to labradors, but which I remember with affection. The Airedale featured in this issue is Jim who was trained for coastguard duties and who gave warning of the first Zeppelin raid on the Kent coast in 1915.
The other labels highlight the roles of other brave animals in the war including carrier pigeons, other dogs, camels, mules, horses and a cat and fox cub which were both military mascots. A lovely issue - now, if only it were not so expensive. Rating:- *****.
The subject featured on the sheet is nicely covered in the book "Animals In The First World War" by Neil R. Storey (Shire Library 2014). 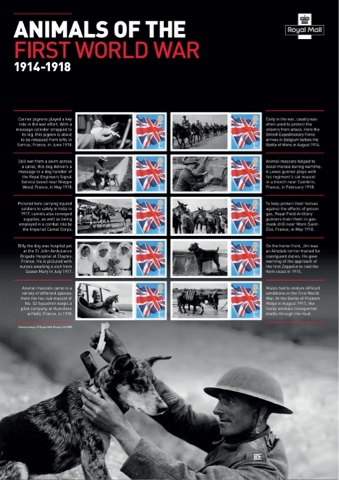 Turning to Mauritius, the Rs7 value definitive has recently been reprinted with a "2015" imprint in the lower margin. This was the value for a domestic rate letter (1st 20 grams). However the domestic rate was raised on 1 August 2015 from Rs7 to Rs10 thus, I presume, rendering the new reprint somewhat redundant. It is worth noting that this is the first rise in postal rates in 6 years on the island (previous change was 9 July 2009) and overseas rates have similarly all been increased by Rs3. A non-philatelic cover with this reprinted stamp used on it during the short period between its issue and the change of postal rates might be an item of great postal history interest and value in the future. 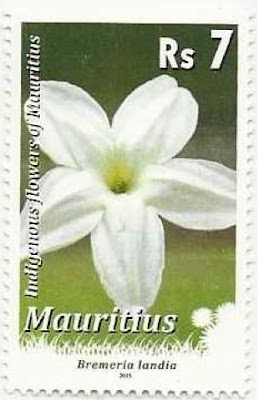 Despite previous reports that the South African Post Office was in such dire financial straits that it could not afford to continue to issue new stamps, another new issue has indeed been been released - a miniature sheet which was issued on 7 August 2015 to commemorate the Women's Charter which was announced in Johannesburg on 17 April 1954. Rating:- *. 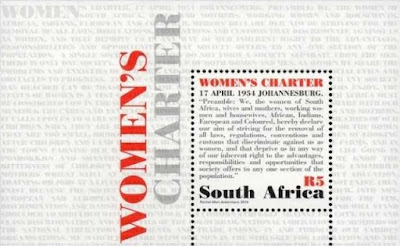 A lovely set of 4 stamps was issued by the postal administration of Namibia, Nampost, on 22 June 2015 which depicts very attractive small antelopes of the country. Not surprisingly, these beautiful stamps have been designed by the wonderful artist, Helge Denker, who along with Anja Denker, has been responsible for placing Namibia in the front rank of modern philatelic excellence. This corrects the mention in Blog 539 where I stated that the issue would be made up of a single stamp. Rating:- ***** (of course). 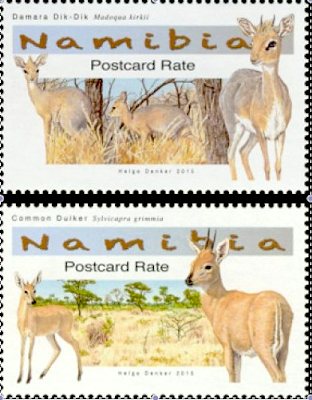 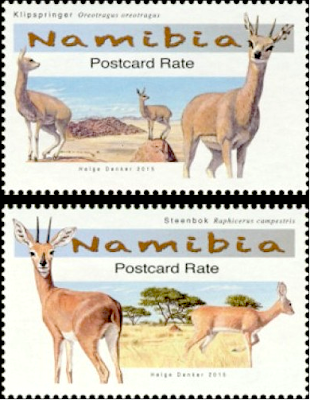