2101. 🇷🇼 CHOGM To Open In Rwanda But No Philatelic Commemoration? 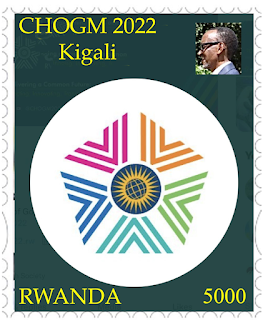 The Commonwealth Heads of Government Meeting opens in Kigali, the capital of Rwanda, on 20 June 2022, bringing together senior politicians from the Commonwealth’s 54 member states. The meeting was originally due to take place in June 2020 but was delayed until June 2021 because of the COVID-19 pandemic and then delayed again to this year for the same reason.  In Blog 1617, I related the history of Commonwealth Heads of Government Meetings and the stamps which were issued over the years by various postal administrations to commemorate the events. The most recent meeting held in London in 2018 was not associated with an accompanying commemorative stamp issue though Royal Mail grudgingly produced a slogan postmark for use on ordinary mail at the time (commonwealthstampsopinion.blogspot.com/2020/03/1617-commonwealth-day-2020.html).

It seems unlikely also that there will be any postage stamps released by I Posta, the Rwandan postal service, because it has not issued any postage stamps since 15 November 2010 - almost 12 years, the longest period in modern times of not issuing a postage stamp of any country in the Commonwealth - and looking at the company’s internet site I could not find any reference to postal rates for ordinary mail in the country with the only postal services getting any mention being EMS (Express mail service) and parcel post. This is the case in a number of countries. The postal service of Samoa (expected to be the next CHOGM host country) for instance rarely releases stamps now after an unfortunate experience in dealing with a United States-based ‘philatelic agency’ and when it does the issue is usually a series of surcharges, some with high face values for use on parcels and express post.

The Meeting’s chair will be Paul Kagame, Rwanda’s fourth President in office since 2000, who takes over the chair from the current holder of the position, Boris Johnson, the British prime minister. The theme of the meeting is ‘Delivering a Common Future: Connecting, Innovating, Transforming’. The Prince of Wales will represent the current Head of The Commonwealth,  96 year old Queen Elizabeth II, at the meeting: the Prince himself has been elected previously by Commonwealth leaders to succeed his mother as the next Head of The Commonwealth. 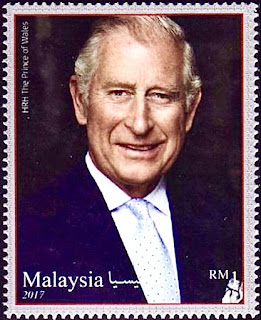 Ali Bongo, the President of Gabon, has made a number of announcements in the past year or so saying that he expects his country to be admitted to membership of The Commonwealth during the Kigali meeting and the government of Zimbabwe will be hoping to hear of progress in its application to rejoin the organisation after the downfall of Robert Mugabe who withdrew the country from Commonwealth membership.

As it seems unlikely that there will be any philatelic commemoration of the event I have put a stamp design together on my I pad (in about 5 minutes, stamp design really isn’t that hard) (see the head of this Blog) and the Meeting’s emblem is featured along with a small cameo of President Kagame. And by the way, if you want a rare error, the ‘stamp’ below has an error of date. 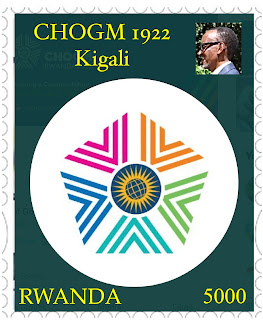