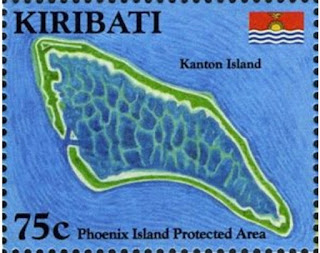 🇰🇮 In Blog 523 I reported that I had discovered lying buried deep in the swamp of my ignorance as well as the the obscure pages of Wikipedia, a former British territory of rather uncertain political status which sat off the coast of Yemen and which was eventually incorporated in the newly independent South Yemen and which went by the name of Kamaran. It definitely qualified to be considered to have been situated down one of the “Bye-ways of Commonwealth stamp collecting”.
Kamaran eventually qualified to be called a British Protectorate from January 1954 until 30 November 1967. The status of various former British colonies, protectorates and protected states is not just of academic interest but has practical implications for inhabitants and their descendants who lived there because they may or may not be entitled to British passports of one type or another. While doing a little more research about Kamaran I came across the official list of Protectorates which is shown below. The names of these places ought to be fully familiar to me but one stood out - a place I’ve heard of and seen featured once or twice on Kiribati stamps but never really took much notice of. But here it was - a Protected State in its own right - Canton Island, to which the British had initially laid claim as long ago as the 1850s. 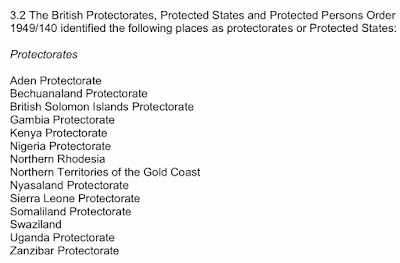 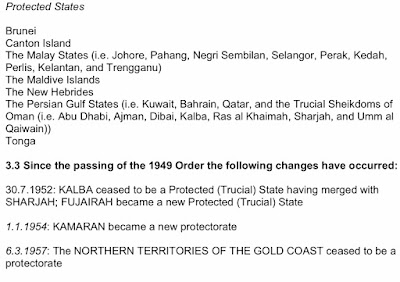 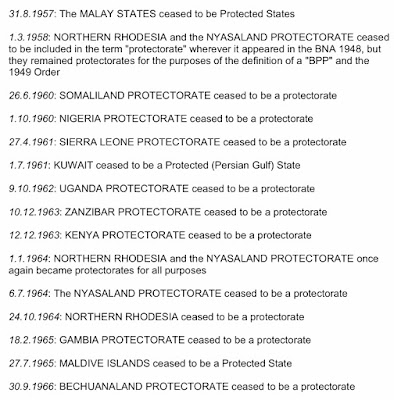 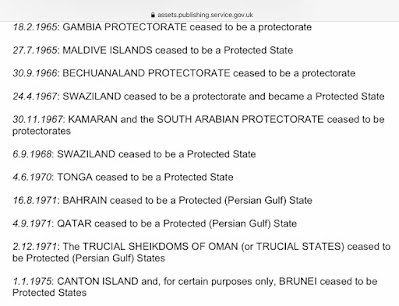 Canton Island, now Kanton Island, is the largest, most northerly and only populated island in the Phoenix Island Group which is part of The Republic of Kiribati. The only village on Kanton is Tebaranga and the island’s population in May 2010 was just 24. The island is surrounded by the vast area of sea named in 2006 as the Phoenix Islands Protected area, a large marine reserve containing 8 atolls. The Kiribati postal service commemorated the establishment of the marine park by issuing a set of 6 stamps and 1 miniature sheet containing all 6 stamps on 12 July 2008 and one of them depicted a map of Kanton Island (shown above) and another a map of the whole reserve (below). 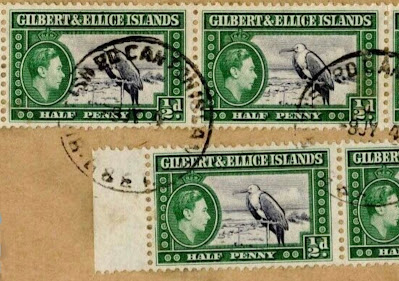 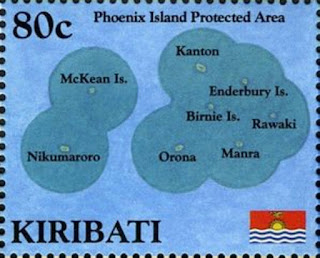 The first recorded European visit to Canton Island was by two British whaling ships, the Phoenix and the Mary, on 5 August 1824 under the command of Captains John Palmer and Edward Reed. The island was initially named Mary Ballcout’s Island after the shipowner’s wife but then given the name Canton in 1854 when the New Bedford whaling ship of the same name ran aground on the atoll.
The British paid several visits to Canton Island subsequently and claimed sovereignty over the island in the 1850s and the British claim was reasserted on 6 August 1936. The British established a radio station there but prior to that American and New Zealand scientists landed on the island to observe a total eclipse of the sun. The American party claimed the island for The United States and erected a monument with two USA flags. It is said that a Royal Nay vessel HMS Wellington fired a shot across the bows of USS Avocet because the Americans had grabbed the best anchoring point and the Americans returned the shot. The two captains then held back until they received their governments’ instructions and the result was restraint to allow the scientific teams to carry out the observation of the eclipse together although  relations were somewhat cool.
More Americans landed on Canton in March 1938 and US President Roosevelt placed the island under the control of the US Interior Department on 3 March 1938. The competing claims were resolved when both governments agreed to establish a Condominion over Canton on 6 April 1939. This was known as Canton and Enderbury Islands Condominion. The British were used to Condominions - they already shared joint rule in Sudan with Egypt and in the New Hebrides with France.
Anglo-Egyptian Sudan had a single post office but New Hebrides had both a British and French post office and local inhabitants could choose to use whichever of the two postal services they preferred but The Condominion of Canton did not have its own its own postal service and it was not until 1939 that a post office was opened there.
I found a letter on the internet, though I can not see whom to credit for its posting there, of a letter from the British High Commissioner for the Western Pacific, whose area of responsibility included the Gilbert And Ellice Islands from where The Phoenix Islands were administered, written to the Secretary of State for the Colonies in London asking for his approval for the establishment of a British post office on Canton. He reports that the government administrator on Canton had been receiving requests from stamp collectors for supplies of Gilbert and Ellice Islands stamps from the island as well as requests for the acceptance of ready stamped envelopes and packages for postage but he was unable to oblige as there was no post office on the island. The Western Pacific Commissioner described two means by which the opening of a post office would benefit the British administration by the opening of a post office - a gain from the revenues flowing from stamp sales and the assertion of Britain’s sovereignty in the face of the American claims on the island.A fascinating letter. Perhaps the Western Pacific Commissioner missed a potential additional source of financial gain - the production of individual stamps for the Canton Island Protectorate.
The US administration opened a post office on Canton in 1941. 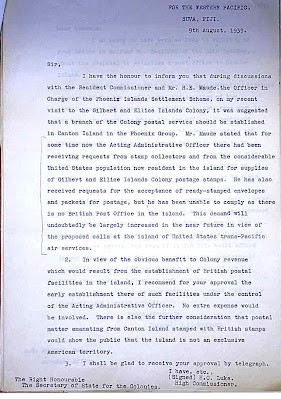 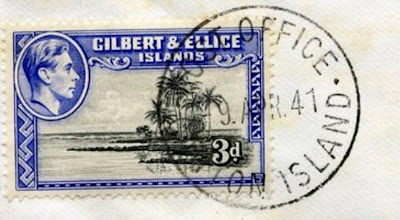 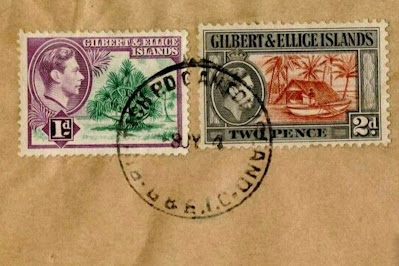 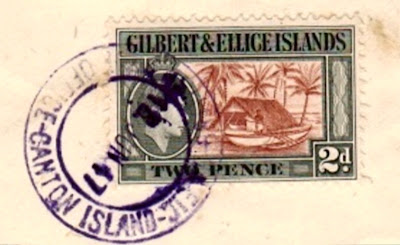 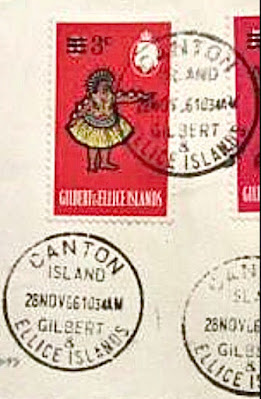 The geographical position of Canton proved to be of the utmost importance in the island’s development. Pan American Airways built facilities for a planned New Zealand flying boat service and the service began on 12 July 1940. When the Americans finally joined the United Kingdom in participating in the Second World War the US Navy built an airstrip on Canton Island as a stopover for flights to Australia and New Zealand and as a staging post for attacks on the Japanese forces occupying the Gilbert Islands. Canton was defended by 1200 troops but was not attacked by the Japanese. After the end of the war several airlines began services which flew across the Pacific Ocean stopping at Canton Island. A community was established on the island to service these flights and to support the airport workers - the island was thus home to an electrical power station, a school for workers’ children, a hotel for aircraft passengers stopping over and other necessary facilities. Eventually the introduction of long range aircraft reduced the need for a refuelling station on Canton Island and by the late 1950s flights by all airlines but PanAm had ceased to use the island’s facilities. A large numbers of flight covers exist from this era in Canton Island’s history. Covers from the British post office dating to the 1950s are not hard to find but much less common than those associated with flights and from the US post office. It is clear that a number of the covers for sale with Gilbert and Ellice Islands stamps fixed to them are philatelic in nature but they are generally interesting and visually attractive.
The Condominion continued in a generally cooperative fashion and the British and American post offices on the island were housed in the same building. With the loss of aircraft traffic the Canton Island community continued to be able exist with the establishment of a tracking station for the US Mercury space programme from 1960 to 1965. The US Airforce and the US Space and Missile Systems Organisation used the island as a base for missile tracking operations until 1976 when all American personnel were withdrawn from the island. The British post office was also closed in February 1968 but the US post office stayed open until 1979  when the Condominion ended and Canton Island and the other Phoenix islands were included in the Republic of Kiribati when it was granted independence in 1979. 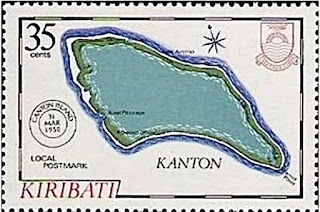 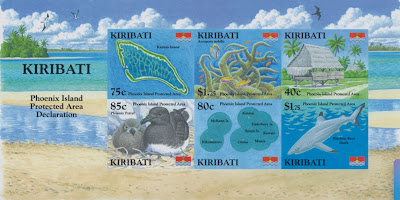