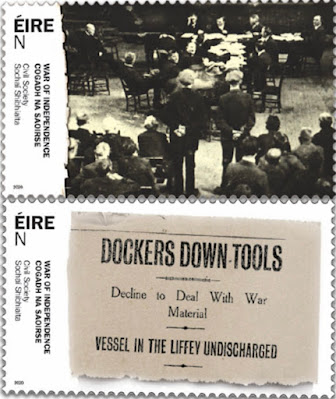 🇮🇪 An Post, the postal service of The Republic Of Ireland, issued 2 more stamps in its ongoing series about the Anglo-Irish War of 1919 to 1921 on 24 September 2020. The issue is titled ‘Civil Society’.

In Blog 1608 the opening months of the war between the IRA and the British forces resisting it were detailed and the stamp issued earlier this year by An Post showing the painting of an IRA column by Seán Keating was depicted. Although the general population initially disapproved of the IRA’s violence the heavy handed response of the British government led the people in Southern Ireland to start to resist the government by holding strikes and other measures. The new stamps feature this reaction. One of the stamps designed by Ger Garland depicts newspaper headlines about the dock workers’ strike whereby they refused to handle war materials. The munitions strike lasted from May to December 1920 and greatly hampered the government’s ability to support its troops in Ireland.

The second stamp alludes to the Dáil setting up of courts which were intended to dispense an Irish law system as British authority collapsed across Ireland and a replacement was required. The Dáil established 900 parish courts and 77 district courts which dealt with rowdeyism, larceny, breaches of the licensing  laws, damage to property, ‘abusive language to women’, bank and post office robberies and assaults.Treason was dealt summarily by court martial. The design also by Ger Garland depicts the IRA court in Westport Town Hall in summer with Conor Maguire presiding alongside Edward Moane and John O’Boyle.

The issue was lithographed by Enschedé and is perforated 13.5 x 14.

As 1920 moved on the British tax system in Ireland collapsed and people were encouraged to donate to Michael Collins’ ‘National loan’ scheme to raise funds for the rebel Irish government. By the end of 1920 £358000 had been raised by that scheme but this was dwarfed by the sum raised by Irish Americans in the United States which amounted to over $5 million. By August 1920 the Westminster Parliament had passed the Restoration of Order in Ireland Act which replaced trial by jury by courts martial in areas where the IRA was dominant and by the beginning of 1921 martial law was in place across much of Southern Ireland. Courts martial were extended to cover the whole population and were empowered to use the death penalty and interment without trial. As a result violence escalated further and on 21 November 1920 Michael Collins’ death squads murdered 16 British agents and later in the day Royal Irish Constabulary men drove to the Crowe Park sporting ground and shot into the crowd watching a football match resulting in the deaths of 14 civilians including one of the football players. Later the same day two IRA prisoners and an associate were shot dead trying to escape from Dublin Castle prison. These events combined to lead to 21 November becoming known as Bloody Sunday.

On 11 December the centre of Cork was set ablaze by Black and Tans as a reprisal against an IRA ambush in the city that day which resulted in the murder of one auxiliary and the wounding of 11 others. As 1920 drew to a close Ireland was at a tipping point and no doubt there will be further stamp issues next year from An Post to take the story further. 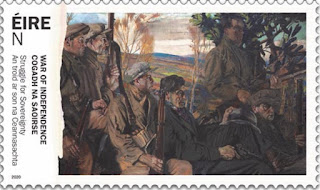