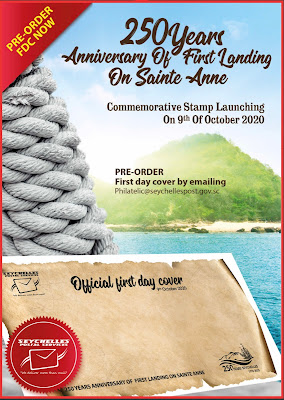 🇸🇨  The Seychelles Postal Service will issue a set of stamps, not yet detailed, on 9 October 2020 to commemorate the 250th anniversary of the first human settlement in Seychelles on the island of Ste. Anne. From the Postal Service’s Facebook page:-

A very attractive set of 4 stamps was issued on 27 April 1970 to commemorate the Bicentenary of the founding of the settlement on Ste Anne. It was designed by Victor Whitley, a prominent designer of Commonwealth stamps at that time, from art by A Smith and was lithographed by De La Rue (aaah! those were the days!). The lowest value depicts the first settlers’ ship approaching Ste Anne and the top value shows a map of Ste Anne off the coast Mahé, the much bigger island where Seychelles’ capital of Victoria is now located 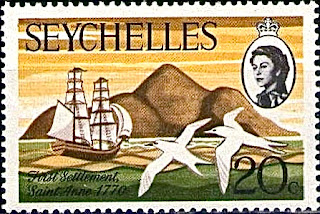 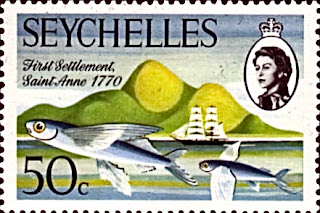 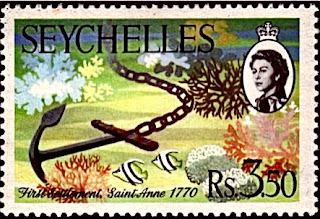 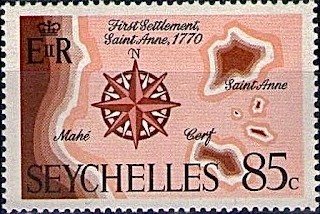 The first recorded landing of humans on the island took place in 1742 when Lazare Picault, the French explorer, arrived there though it is said that Arab, British and French sailors had visited Seychelles previously. I have not been able to discover the name of the ship in which he was sailing. He named Mahe, just over 4 kilometres from Ste Anne, L’Île d’Abondance ((Isle of Abundance). Picault’s landing on Ste Anne was depicted on the lowest value of the 1969 ‘History of Seychelles’ definitive set. 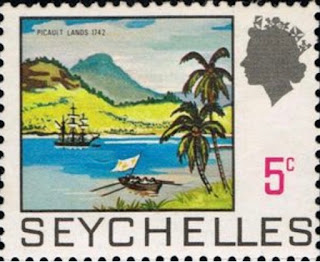 I look forward to seeing the stamps in this upcoming issue which commemorates one of the most significant anniversaries in Seychellois history.