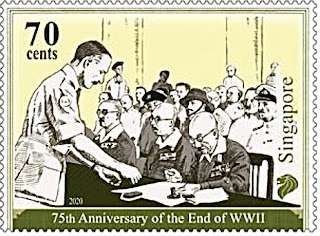 🇸🇬 Singapore Post will issue an interesting set of 5 stamps on 12 September 2020 to commemorate the 75th anniversary of the end of the Second World War. Each stamp shows a scene from the events which occurred in Singapore during the war including the British surrender to the Japanese invaders in 1941 on one of the 1st Local rate stamps and Japanese generals signing their surrender to the British in 1945 after the city’s liberation. An excellent set. The issue was designed by Lim an-Ling and lithographed by Secura and is perforated 13. Rating:- *****. 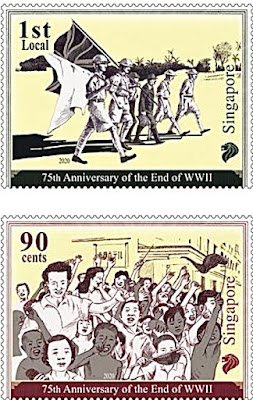 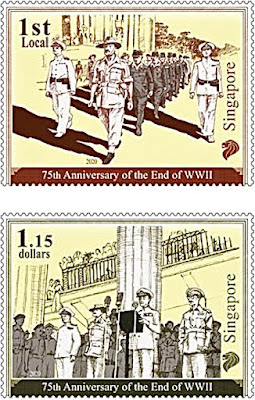 The total number of stamp issues released by Commonwealth postal administrations or their agents by the end of August 2020 is reduced by 24.5% compared with the same period in 2019. By the end of August 2019 the Commonwealth postal services had released a total of 477 issues whereas the total in 2020 was 360.
The overwhelming number of new issues of Commonwealth postal services or their agents have been released by Australia Post, Royal Mail, Jersey Post, Isle Of Man Post Office, Guernsey Post,  Royal Gibraltar Post Office, Stamperija (Sierra Leone, Maldives and Mozambique) and New Zealand Post. The effect of the COVID-19 pandemic on new issue stamp collecting therefore looks as though it has been quite dramatic and it will be interesting to see what the final position is by the end of the year. So far in 2020 the following Commonwealth  postal services are NOT known to have issued nay stamps:-