🇸🇸 A comment on Stamp Boards by mpstamps has drawn my attention to the South Sudan Stamp Collectors Facebook page where Leo Van Dar Velden from whom I’ve purchased some excellent stamps in the past, unobtainable elsewhere, and who is a great expert on the stamps of South Sudan and also has links with the country, comments that he expects that the postal service of South Sudan will release a new set of stamps later in July 2020.
He reports that a new issue titled ‘Struggle against COVID-19 pandemic:Tribute to Healthcare personnel” will be released and that it is part of a joint issue based on a common design by South Sudan and some other African countries. The South Sudan stamp design Committee has made alterations to the basic design to meet local needs and the issue will be made up of 6 stamps and 1 miniature sheet. Leo Van Der Velden reports that other countries participating in this omnibus series include Mali, Central African Republic, Djibouti, Guinea-Bissau and St Thomas and Prince. He reports that some countries are assumed to have already released their issues and he includes an illustration of stamp from the CAR with a first day cancellation (27 April 2020) applied to it.
At this point alarm bells begin to ring as all the countries listed above have postal services which use the notorious Stamperija agency to produce and market their very numerous and frequently awful philatelic products. This issue was raised in a comment on the South Sudan stamp collectors Facebook page but Leo Van Der Velden reassures that Stamperija has not been involved with the South Sudan issue. The basic design in slightly different forms is illustrated below on issues from St Thomas and Prince, Niger, Djibouti and CAR. Other products accompany the basic stamp - from St Thomas and Prince there are a prestamped postcard and a miniature sheet containing a single stamp, from Niger there are another stamp (depicting Chinese health workers and not Africans) printed as a se-tenant pair with the basic design stamp, a miniature sheet containing both stamps and a stamp booklet and from Djibouti 2 other stamps (one depicting a health worker and the other an armed soldier - neither look African) printed as a se-tenant trio in sheetlets of 9 (3 x 3) and a single stamp miniature sheet depicting what look again like Europeans rather than Africans. The South Sudan designs themselves are awaited. 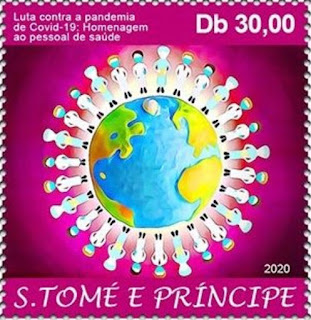 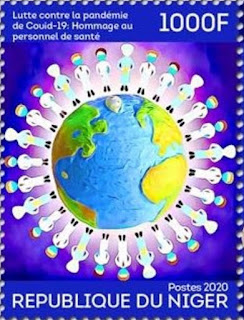 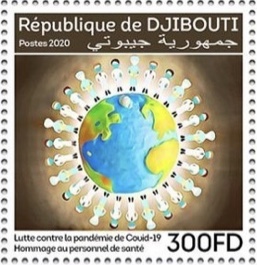 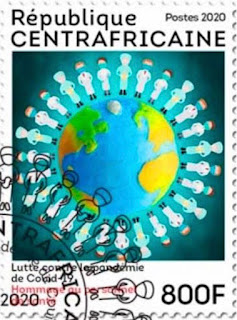 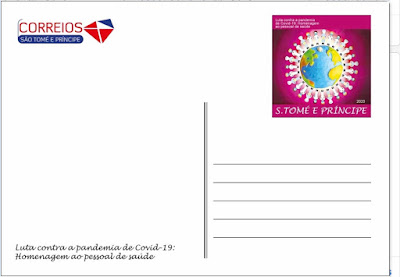 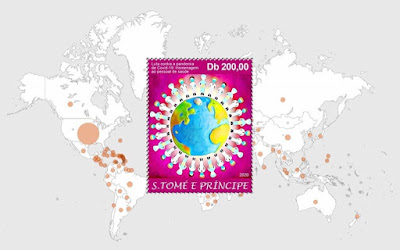 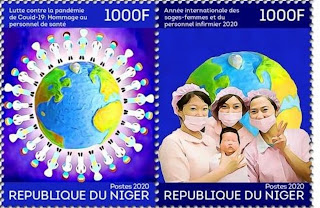 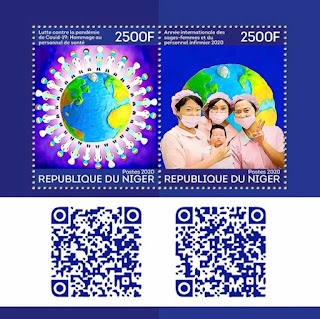 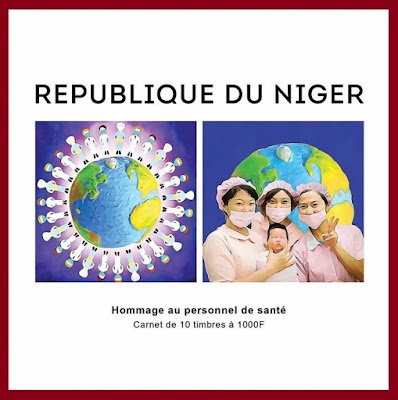 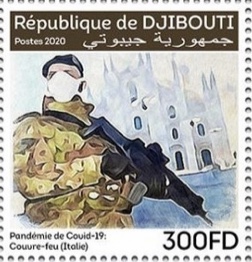 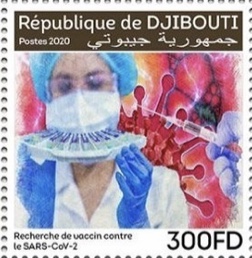 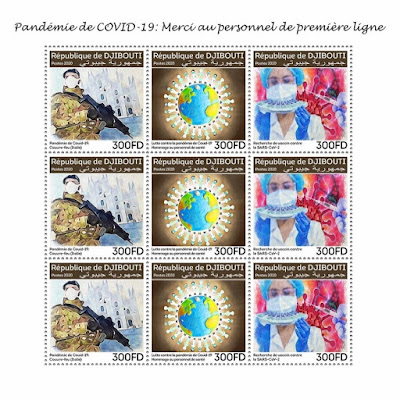 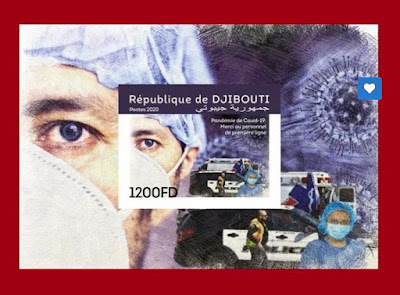 Most of the above items are currently being offered for sale on an internet auction site by what appears to be an Algerian dealer, Aurescollections, which specialises in the stamps of some Francophone African countries. The dealer’s shop has a not insignificant number of Stamperija philatelic products for sale but pleasingly it appears that Aurescollections does not have any link at all with Stamperija.
South Sudan remains an applicant to join The Commonwealth and as the political and military situation in the country seems to be gradually stabilising the day may draw nearer when it is admitted to the organisation. I therefore continue to watch what is happening with the country’s very infrequent stamp issues and am pleased to read that an interesting new issue relevant to it and every country will soon be released. But one can not help but be anxious if there are hints that Stamperija might be lurking in the background.
Finally I heartily recommend requesting to be admitted to the South Sudan Stamp Collectors Facebook page which is a source of invaluable knowledge on the subject of South Sudan stamps.

Addendum. Reply to Aurescollections (see below). Thank you very much for your comment. It is immensely helpful and makes it clear that although Aurescollections sometimes sells stamps from African countries which in recent years have allowed Stamperija to produce philatelic products in their name these particular stamps are nothing to do with Stamperija and Aurescollections is selling them as real stamps produced by those African countries. I think people were concerned about these issues but your comment has clarified their status and made it clear just how interesting they are. Of course the upcoming South Sudan issue is particularly interesting and collectors will look forward to news about it and if other Anglophone countries participate in the issue they will be of great interest to those who collect the stamps of Commonwealth countries. While I understand that your main interest is in the stamps of Algeria it is pleasing to discover a dealer who also makes available new issues from Africa which are often hard to track down and though this Blog is principally interested in stamps of the Commonwealth postal administrations I shall enjoy following your shop and seeing if any fascinating items come up for sale on it which otherwise collectors might not know about or be unable to obtain. The real new issues of Africa are always interesting and it is frequently hard to find out information about them. Once more, thank you very much for your extremely helpful comment. I would be very pleased if at any time you have news of new African stamps relevant to this Blog if you would consider being kind enough to leave a comment to make us aware of them. As I say, obtaining news of African new issues is very problematical and I am always grateful for input from others who have their noses to the ground. I look forward to seeing which other countries are participating in the COVID-19 issue.
Best wishes, WK.

Addendum 2 - New items were offered for sale by Aurescollections on an internet website on 19 July 200, this time from the postal service of Senegal which certainly has no connections with Stamperija. The issue in the omnibus design was made up of a 500F value (sold it appears only in booklets of 10 with a date at the lower right hand border of the pane of 20 July 2020 which I assume to be the first day of issue) and a 1000F value in both perforate and imperforate formats. 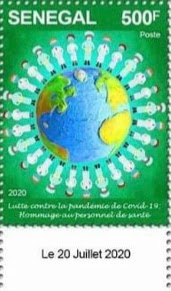 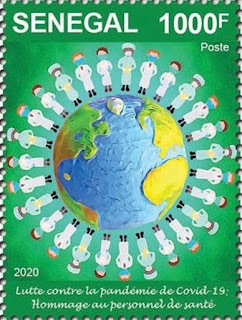 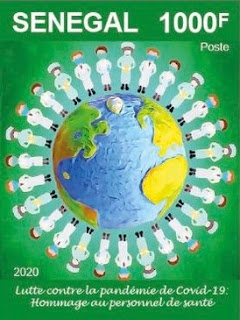 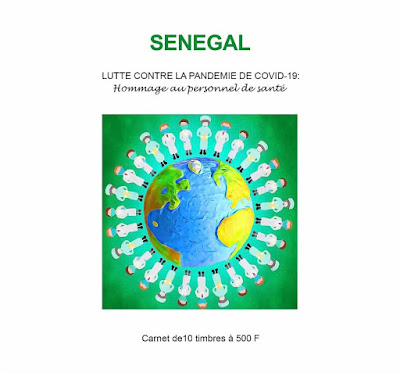 I have seen no further news of an issue from South Sudan yet.