1695. 🇿🇼 A Hundred Years Of Aviation In Zimbabwe. 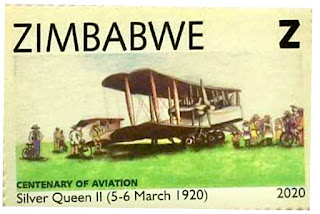 🇿🇼 Zim Post, the postal service of Zimbabwe, issued a set of 4 stamps and 1 miniature sheet on 5 March 2020 to commemorate the centenary of aviation in Zimbabwe. The first flight to arrive in the then Rhodesia was the Silver Queen II which is featured on the Z rate (domestic rate) value. The aircraft, a Vickers Vimy bomber, was flying on the London to Cape route and crashed at Bulawayo on 6 March 1920. The aircraft was flown by Lt Col Pierre van Ryneveld and several days afterwards he resumed his flight to the Cape in another aircraft, a DH9 named Voortrekker. Rating:- *****. 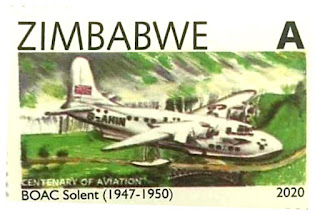 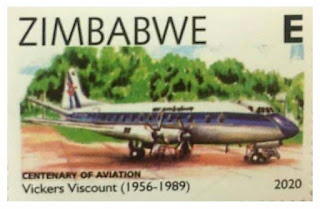 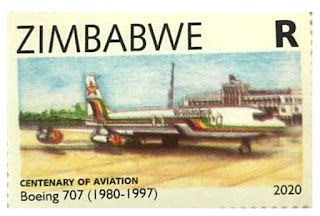 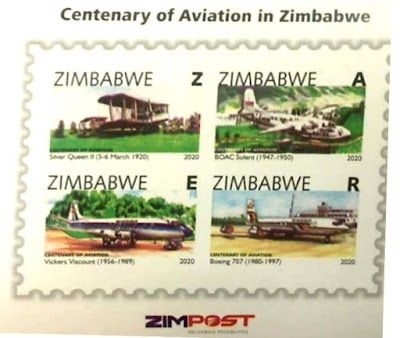 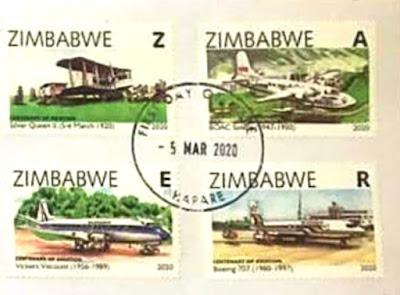 🇮🇳 A comment on Stamp Boards by Hyderabadi reports that India Post has issued a new My Stamp item - a single Stamp with attached label sold at a premium in the usual format of a sheet of 12. The theme of the stamp is ‘Best wishes on your retirement’. 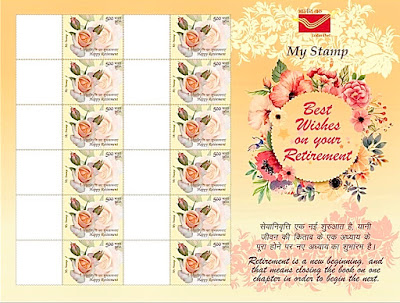 🇬🇧 Royal Mail plans to release a torrent of philatelic products in the coming weeks.
The issue commemorating the veteran popular music group, Queen, due on 9 July 2020 was dealt with in Blog 1692. That philatelic onslaught is to be followed by an issue on 30 July 2020 which features the Palace of Westminster which continues with Royal Mail’s programme of featuring London whilst ignoring the rest of The United Kingdom. This issue will be made up of 3 x 1st Class rate stamps and 3 x £1.68 stamps (in horizontal strips of 3 for each value) plus 1 miniature sheet containing 2 x 1st Class and 2 x £1.63 stamps. This unending series of stamps featuring Palaces in London has become incredibly dull. Rating:- *.
Just a couple weeks afterwards, on 18 August 2020, the next issue, titled Sherlock, will be released featuring the popular television series of that name. The issue will be made up of 6 stamps (3 vertically se-tenant pairs - 2 x 1st, 2 x £1.42 and 2 x £1.68) plus yet another miniature sheet (2 x 1st and 2 x £1.68). There will also be a ‘Collectors sheet, ‘Stamp book’ and numerous other ‘collectable’ products. A real catchpenny issue if ever there was one. I shall not waste my money on buying any of the above products which are fated to never be used on an item of mail save those originating from philatelic sources. Rating:- 0.
Norvic recently reported that there are 4 more Machin Head definitives from Royal Mail to add to the 2020 total - all self-adhesive reprints with M20L codes.

These are:- 2nd Class rate from Business sheets M20L MBIL 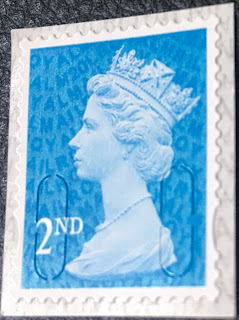