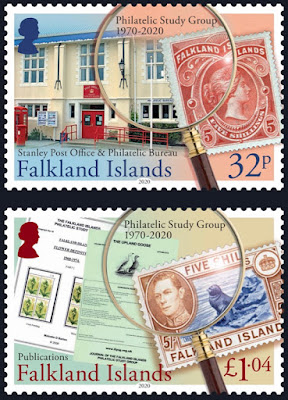 🇫🇰 More new issue news from the postal service of the Falkland Islands as it reveals that it intends to issue a set of 4 ‘stamp on stamp’ stamps on 7 September 2020 to commemorate the 50th anniversary of the Falkland Islands Philatelic Study Group. This is a splendid set designed by Bee Design from photographs taken by Nick Bonner, Tansy Bishop, FI Museum and National Trust and Stefan Heijtz and the issue was lithographed by Cartor and perforated 13.5. Rating:- *****.
Thanks to Juliet Warner of Pobjoy Stamps for information about this issue. 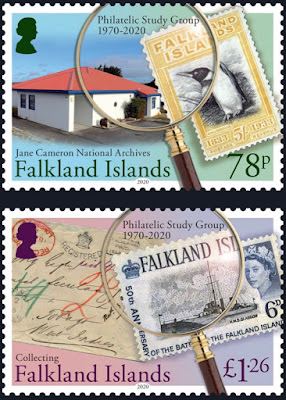 🇵🇬 Regrettably Post PNG, the postal service of Papua New Guinea, has announced that it plans to release a grand total of 17 new issues, including the four already announced, during 2020. Details of five of the remaining 13 issues have been revealed but 17 issues in one year is plainly excessive and indefensible. The one good point is that Post PNG rarely releases as many issues as it plans so we must hope that that is the case again. 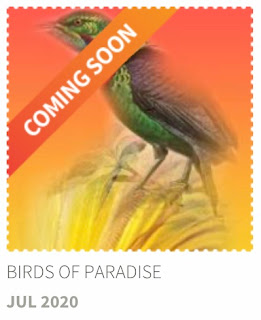 🇮🇳 Comments on Stamp Boards indicate that India Post will release a miniature sheet containing 4 different stamps (and, I’d have thought, 4 individual stamps) on 25 July 2020 to commemorate the frontline workers in the struggle against COVID-19.

🇰🇮 As reported in Blog 1663 the postal service of Kiribati has previously announced that it would issue a set of stamps in June 2020 on the subject of ‘Solar energy, Harnessing the power of the sun’. I have not yet seen anything to confirm that such an issue has been released recently but it is worth noting that a Presidential election recently took place in Kiribati in which the incumbent President, Taneti Maamau, was re-elected and he had, during the course of his time in of office, broken the country’s ties with Taiwan and established diplomatic relations with The People’s Republic Of China. Kiribati is strategically important to China as it attempts to expand its power base in the Pacific Ocean area as the islands of Kiribati are spread across an enormous area of sea and influence over such a wide area is clearly of great benefit to The People’s Republic. Why do I mention this here? Well, The People’s Republic is very active in producing and donating to its client countries, sets of stamps which celebrate the close relationship of the two respective countries particularly on significant anniversaries of the establishment of diplomatic relations between the two and so we should look out at some stage in the future for such an issue appearing from Kiribati.


🇧🇿 The excellent website, Birds of the world on postage stamps, compiled devotedly by Chris Gibbins, has pointed out that the new definitive series from the Belize postal service which features birds was not issued in April 2020 as previously stated (Blog 1686) and indeed has not yet been released at all. The Belize postal service is quoted as stating that “As soon as they are (issued) we will put up the images”. The latest edition of Stanley Gibbons Stamp Monthly includes the set in its the Catalogue supplement with a date of issue of 29 April so I assume that the catalogue editor will need to review this information. 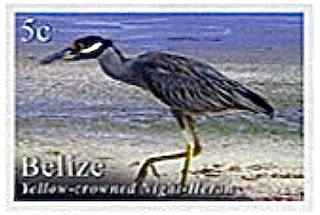